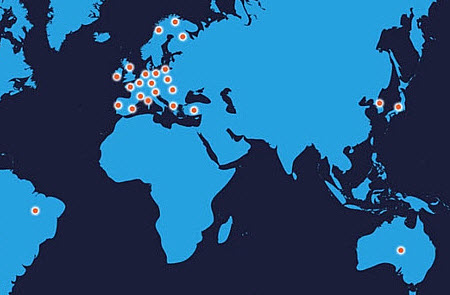 A strong reading culture frequently trends toward robust news consumption, as well. The Reuters Institute’s new Digital News Report has many revelations to offer, from 26 countries. Your irony of the week: Reuters’ new Digital News Report declares that video may not be the runaway format-of-choice many say it is, at least in news…and the most effective way they tell you that?—is in a video.

As Laura Hazard Owen puts it at NiemanLab: “This week, a Facebook executive suggested that your News Feed is likely to be ‘all video’ in the next five years.

“But a new report out Tuesday from Oxford’s Reuters Institute for the Study of Journalism suggests that text may have a longer run, at least for news.

“Consumption of online news video is still a minority behavior around the world, the researchers found: Only about a quarter of respondents, across 26 countries, watched news video online in a given week.”

Owen goes on to point up several more of the study’s key findings:

The Reuters Institute report is based on a survey of more than 50,000 people in 26 countries, twice the size of the 2015 study, according to its authors. This year, countries added include Canada and South Korea to the non-European group, which also comprises the States, Brazil, Australia, and Japan.

There’s a useful caveat, too: “Our survey was conducted online and as such the results will under-represent the consumption habits of people who are not online (typically older, less affluent, and with limited formal education)…The main purpose, however, is to track the activities and changes over time within the digital space–as well as gaining understanding about how offline media and online media are used together.”

The text of the report’s key findings includes this about video, which is popularly talked about, as Owen writes, with such energy:

“Although publishers and technology platforms are pushing online news video hard for commercial reasons, we find evidence that most consumers are still resistant.

“When pressed, the main reasons people give for not using more video are that they find reading news quicker and more convenient (41 percent) and the annoyance of pre-roll advertisements (35 percent).”

These are, actually, things that newspeople who work in video can tell you.

Video news producers know that video production is labor-intensive. Video consumers know that video is unsearchable and that you can spend a lot of time rolling back and forth trying to find something. What’s more, video is an old-world linear technology: when respondents here say that reading is quicker, they’re referring to the fact that they may not have time to let video play out at the pace its producers are using it to tell a story.

And here’s Reuters’ snappy video treatment of some of the key findings of the Reuters Institute’s Digital News Report:

Trust in news is highest in Finland (65 percent) and lowest in Greece (20 percent). Almost everywhere, editors and journalists are trusted less than news organizations. Much more is available free of charge in the full report from the Reuters Institute.