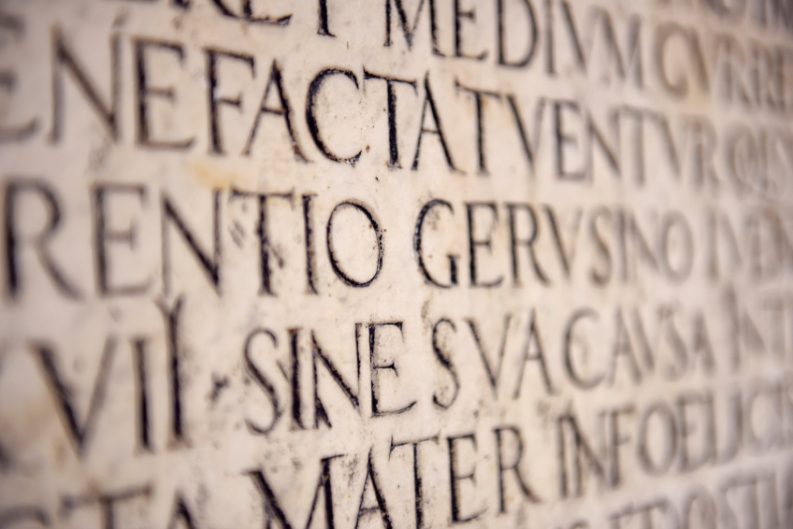 A full 122 years after its inception, Thesaurus Linguae Latinae still is nowhere near ready. Maybe by 2050. Don’t pre-order just yet. If, like so many people today, you have a long-unfinished book in your desk drawer or on the cloud, you finally can take heart that you’re not the slowest at finishing that thing. Unless you started yours before 1894. — Porter Anderson

In a feature from Byrd Pinkerton at NPR’s Parallels, the focus is on work in Munich, home of the Bavarian Academy of Sciences and Humanities. There, 20 researchers are busy at work “on a comprehensive Latin dictionary that’s been in progress since 1894,” Pinkerton writes.

The project is titled Thesaurus Linguae Latinae, and is funded in part by the Union of the German Academies of the Sciences and Humanities.

The latest volume to be published, containing words that begin with the letter “P” came out in 2010.

But, as Pinkerton writes, “They’re not as far along as that may lead you to believe.”

“They skipped over N years ago because it has so many long words, and now they’ve had to go back to that one. They’ll also working on R at the same time. That should take care of the rest of this decade.”

The project, one of many scholarly efforts “taken on by the German government in the late 19th century,” and continuing through two world wars and the reunification of Germany, has one goal: “Documenting every use of Latin words from the earliest Latin inscriptions in the 6th century BC up until around 200 AD, when it was in decline as a spoken language.”

Marijke Ottink, who has been at work on the Thesaurus for 19 years as a researcher and editor tells NPR, “If a word is just on a toilet in Pompeii in graffiti, you’ll find it with us.”

Ottink is currently working on finishing the article for the word res, which can be roughly translated to thing. And just like the English equivalent, it’s a remarkably common word in Latin, which makes it extraordinarily difficult to pin down.

Which, of course, is exactly why Ottink did not volunteer to take on res, the word she has been working on since 2009: “No one volunteers for res,” she tells Pinkerton, who described the scene and research process:

“Every slip of paper on Ottink’s desk is a unique instance of the word thing in recorded ancient Latin, close to 20,000 references in all. It’s her job to go through each example, read through the original text it came from, figure out the precise inflection of its meaning in each case and then wrestle all of the definitions into a descriptive article — written in Latin.

“This is especially challenging for a slippery word like thing. You don’t get a grip of the real thing,” Ottink explains, then catches herself. “Ha! Real thing!”

“Ottink finally has a rough draft of the res article ready,” Pinkerton writes. “In the meantime, she’s taken breaks, writing or editing articles for words with fewer references, like relego, which means to re-read.”

Nigel Holmes, a fellow thesaurus editor, wrote the article for nam, or for.

“I have sometimes joked that I still have nightmares from when I was in nam,” he tells Pinkerton. “But it was…easier than I thought.”

Still, as Holmes points out, “Even when one tries to have a completely comprehensive dictionary, there’s still work for other people to do afterwards. That is, there will still be aspects of a use of a word that haven’t been discovered.”

Even now, looking back on his nam article, he says, “I see things where I wish I had done something slightly differently.”

The task involved in finishing the work is monumental. Still to come are volumes like R and Q, which, Pinkerton writes, are “full of question words and conditionals that have thousand and thousand of instances.”

The projected completion date is 2050.