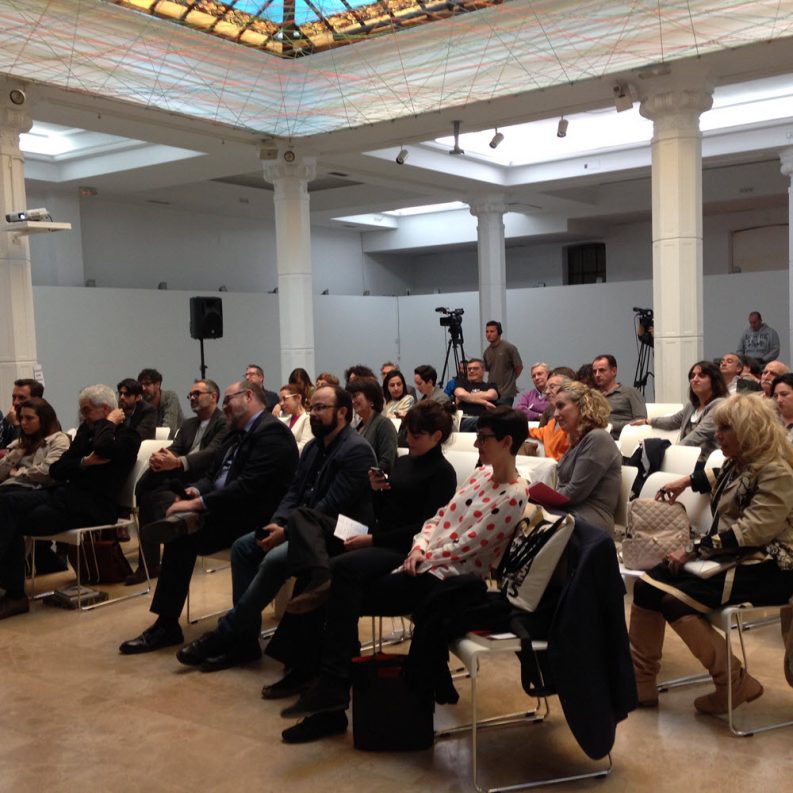 With 42 percent of Spain’s population reporting to surveys that they’re not reading books, last week’s symposium in Madrid about bookselling had an extra edge of urgency. The audience for last week’s symposium at the European Institute of Design in Madrid. Image: Valentina Morotti

My new hero may be Mexico’s Manuel Dávila, who in last Thursday’s symposium in Madrid, said: “In this industry people are basically complaining about everything.” In whatever country and on whichever continent you stand, this may ring true. As Pablo Rapahel says in Valentina Morotti’s writeup, we probably worry too much, as the digital dynamic shakes the bookselling business. “The future,” Raphael told the audience, “holds an old heart.”  — Porter Anderson

‘The Essence of Their Identity’ On a yearly basis, the Cultural lab “Mexico-España” and the Santillana Foundation join forces to organize a forum, the goal of which is to focus reflection on a specific field in the arts.

Many experts gathered at the hall of the European Institute of Design (IED) in Madrid last Thursday (May 12) to discuss bookstores. Despite the romanticism that surrounds these places, they are maybe the ones paying the highest price in the evolution of the entire book value chain.

That is why Pablo Raphael, director of the Mexican Institute in Spain, in his opening speech invited both the audience and the speakers to avoid future-and-past dualism, saying, “The future holds an old heart.”

A similarly heartfelt plea came from Basilio Baltasar, director of the Santillana Foundation, who defined the people who work in bookstores as “cultural heroes,” vital agents for the survival of the entire ecosystem.

A Connection With the Reader

The agenda was a busy one.

The first panel directly addressed shelves, the cornerstone around which all bookstores, physical and digital, are built. When invited to talk about the strategies they use to place a book in the readers’ hands, the speakers gave answers that ranged from traditional to futurist with some nuance of Spanish touch

Silvia Clemares from Kobo explained how they use data to build appealing digital selections for their readers, 75 percent of whom are women in their 50s and older (in the Spanish-speaking world). In addition, the audience heard about two interesting projects “made in Spain”: Librotea, a digital platform that fosters discovery using human recommendation rather than impersonal algorithms, and Re-read a second-hand bookstore thriving in Barcelona.

‘Amazon Was Not Demonized as It Usually Is’

A second panel, on sales revenues, introduced some controversy around self-publishing, Amazon, and piracy.

The conversation opened with a call for transparency by Arantza Larrauri from Libranda, the major distributor of digital content in Spanish. The company has recently published a study on ebooks.

What the research can’t tell us, of course, is the size of the self-publishing market because Amazon and other major online retailers don’t disclose their sales figures. This is not a minor fact, considering the volume of Kindle Direct Publishing (KDP) in Spanish, which is estimated by some (without confirmation) to come to some 100,000 or more titles and to account for some 30 percent of Amazon Spanish-language ebook sales. Despite the controversy about the actual market share of self-publishing, both Iría Álvarez, who is responsible for digital development at Penguin Random House, and David Sánchez, from the subscription service 24symbols, agreed that they see it as a huge opportunity for the future. PRH has placed a big bet on self-publishing with its Me gusta escribir project and 24Symbols, Sanchez said, is happy with its agreement with the US platform Draft2Digital, which provides content in English.

The real surprise, though, was that Amazon was not demonized as it usually is.

Larrauri and Álvarez said they recognized Amazon for having helped speed up digitization in the Spanish-speaking world. Some 30 percent of publishers of content in Spanish are said to have not yet digitized their content. This is part of the reason the industry still faces piracy. Public libraries, with their renewed and stronger offer, could play a leading role in fostering a new awareness among Spanish readers, but what’s missing at the moment, the speakers said, is awareness of legal digital services.

‘In This Industry, People Are Basically Complaining About Everything’

Those who expected a tranquil conversation about the beauty of working in a bookstore were absolutely disappointed. While prominent booksellers were sharing their experiences in the trenches — dealing with the fragility of their jobs and an unforgivable institutional silence, especially in Madrid where bookstores act as the real cultural agitators — a provocative insight came from Mexican guest Manuel Dávila.

“In this industry people are basically complaining about everything.

“This industry, as a matter of fact, is stronger than what we think. The problem is that we’ve lost the essence of what we are.”

His main point was that the terms “transformation” and “extinction” have been conflated. In a scenario that’s complicated by the controversial role of institutions that provide funding only to a few, booksellers, Dávila said, should re-discover the essence of their identity.

In this case’ initiatives like the bookstore program at the University of Barcelona and its training program might hold an answer.

Agora, or the Mission of Bookstores

The final discussion of the day arrived with more controversy, especially in looking at the book as a medium through which culture is transmitted. In that light, what bookstore models are what society will need?

The message that this workshop helped to articulate is that there is much to do, despite the efforts of the key players to weave networks and build a stronger future for the book ecosystem.

Given that in Spain 42% of the population report in surveys that they’re not reading books, the challenge for bookstores is hardly easy. The enthusiasm, passion, and commitment of all participants may be their best aid going forward.