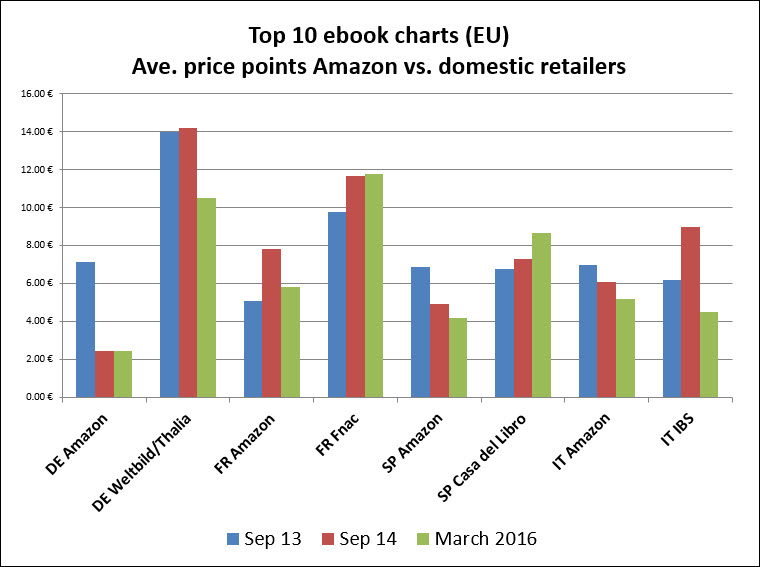 Publishers Navigate ‘a Sea That Is Not Theirs Anymore’

“What is going on today is not controlled and shaped anymore by those old stakeholders and gatekeepers who used to define content, media or format,” writes Rüdiger Wischenbart in the newly released 2016 iteration of his annual Global Ebook Report.

Wischenbart, based in Vienna, is the Director of International Affairs for BookExpo America (BEA), which opens today (May 11) at McCormick Place West in Chicago with Poland as Market Focus Guest of Honor.

His annual Global Ebook Report, Wischenbart attempts to create a picture of one of the most challenging elements of the world publishing scene today. Because the largest retailers trading in the ebook space don’t report sales figures — most significantly Amazon — the publishing industry is left, as The Bookseller’s Philip Jones puts it, trying to analyze its own digital market “by candlelight.”

“The publishers, media moguls, or old school network captains navigate in a sea that is not theirs alone anymore. Not at all.”

What follows is probably the most comprehensive look at features of the ebook presence in the digital publishing array. If the report is not always quite as cohesive a development of the topic as we might wish, this is hardly Wischenbart’s fault. Publishing’s data lies in many places today. Because the preponderance of sales figures are not reported, we actually do not know how many ebook titles exist, nor how many authors are engaged in producing them.

More hurdles arrive when trying to coordinate incoming data. Tracking varies among publishers as you cross national borders and engage with various publishing associations, making comparisons tricky — red and green apples, at the least, if not outright apples and oranges.

Wischenbart’s summation, however, involves a maturing of our understanding of ebooks as a part of the picture — no longer charging ahead even in the US and UK markets, which are the friendliest to e-reading.

“Altogether, what we currently see,” he writes, “is most probably the ‘end of the digital beginning,’ and the beginning transition into the next, perhaps even more challenging phase, where writing, publishing and reading morph into fluid settings; where any content, in any format, is available for almost any user — yet without much stability both with regard to who is offering what, as well as how that offer is taken in by the many fickle audiences around the world.”

“Without any formal violation of [local] regulations, ebooks have systematically begun to undercut the practices of books having, for each format and edition, a price that is easy to anticipate by the consumer.”Rüdiger Wischenbart

In practical terms, the report’s “Global Ebook Yellow Pages” may be of use to many who want to access and do business with some of the 350 listed companies “dedicated to ebooks” and including publishers, service organizations, distributors, and aggregators.
In Berlin during his presentation, Wischenbart mentioned the prevalence of self-publishing in the ebook market. (Ebooks are far easier to produce than print and have been the key path to market for self-publishing authors, of course.)
“Self-publishing is not only a technique of people who don’t find a proper publisher to bring out their book,” Wischenbart told the audience, “but it’s also an indicator that the old structure of book publishing may be about to change.”

Wischenbart also told the assembly in Berlin that “the only area in which we see any growth in ebooks is in fiction.”

The Problems of Pricing

Easily one of the most disturbing issues encountered in a round table discussion on ebooks among a group of international and German publishers in Berlin is pricing for books overall (all formats). While opinions vary widely, the advent of the ebook is now understood to have been the catalyst for a sharp descent in prices since the debut in 2007 of the Amazon Kindle. Amazon’s original $9.99 price point for an ebook now seems generous compared to the sorts of pricing seen in various markets and sectors, particularly as the self-publishing wing has used ultra-low pricing to try to attract readers from trade offerings.

Even as publishers in the United States levy agency-pricing on their ebooks at much higher rates than the Amazonian $9.99 preference, many observers fear, as Wischenbart cites, that this is driving readers away from trade ebooks and contributing to the slowing of digital growth in sales.

And in Germany, the major publisher Bastei-Lübbe’s board member Klaus Kluge is interviewed by Borsenblatt.net in an indictment of the past years’ downturns in book prices. Kluge says that he has a study underway to experiment with various price points. The average hardcover price, he says, once stood at 45 Deutschemarks before the changeover to the euro. Today, a hardcover may go for 20 euros, a price Kluge terms “staggeringly low.”

Beyond such currency adjustments specific to the Eurozone, the wider fear is that the advent of the paperless digital book and rock-bottom pricing has actually adjusted in the minds of reader-consumers the value of a book.

When in the US a book is regularly offered for 99 cents, when indie authors see $2.99 to $4.99 as a “sweet spot” for pricing, and in the UK, books are offered in a promotion for 20 pence, can publishing expect the buying public to see the work of authors and publishers as being as valuable as they believed it was before?

Wischenbart’s report is clear on the connection of ebooks and book pricing: “Without any formal violation of [local] regulations, ebooks have systematically begun to undercut the practices of books having, for each format and edition, a price that is easy to anticipate by the consumer.”

He’s saying that pricing is unpredictable, capricious in many cases, difficult for consumers to understand and anticipate.

It is “a strikingly confused picture,” Wischenbart concludes, when in Europe we see bestsellers priced “anywhere between €0.99 and €25.o0.”

It seems that pricing in every format and every sector of the business should be a more pressing topic of concern than it seems to be here at BEA this year. By next year, that may have changed.