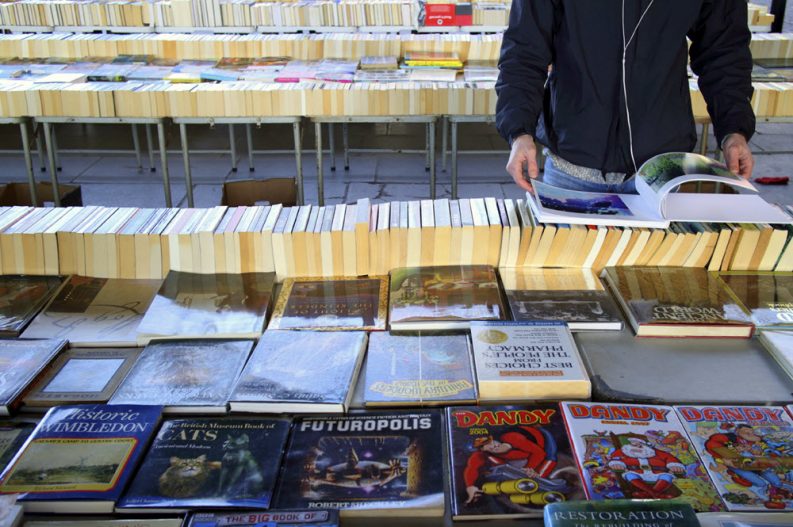 ‘Currently 25 percent of our top 20 fiction titles are translated,’ we learn from Waterstones. It appears that UK readers are surprisingly into international reads. In a report for The Guardian, Alison Flood writes that translated literary fiction is now selling better on average in the UK than literary fiction written originally in English, with authors including Elena Ferrante, Haruki Murakami, and Karl Ove Knausgård “driving a boom in sales.”

According to a survey commissioned by the Man Booker International Prize, while fiction in translation made up just 3.5 percent of literary fiction titles in 2015 sales, it accounted for a robust 7 percent of sales in 2015. “The research, conducted by Nielsen Book, looked at physical book sales in the UK between January 2001 and April 2016.

“Although the proportion of translated fiction is still ‘extremely low’, at 1.5 percent overall, the sector still “punches well above its weight,” said [Nielsen], with that 1.5 percent accounting for 5 percent of total fiction sales in 2015.”

“During the period of study, literary fiction books were translated from 91 languages, from Afrikaans to Yiddish. The most popular source language was French, with 200,000 books selling in 2001, rising to over 400,000 in 2015.

“As has been noted by the Man Booker International Prize judges, the languages of the Indian sub-continent are extremely under-represented with just a handful of titles published from Kannada and a fall in the number of literary fiction from Hindi available in the period from 686 to 299 titles. “Not only are the numbers of translated books sold going up, but there is an incredibly devoted readership in Britain of translated fiction. We were amazed to discover this – the only thing we’ve known is the 3-percent figure and we didn’t know if that related to the number of titles published, or to sales.

“For translated literary fiction, it turns out the proportion published is about the same, at 3.5 percent, but that sales are much higher, at 7 percent.”

Rocco added that the research was “confirmation of the health and growth potential of international fiction in the UK”, and expressed the hope that it would “encourage publishers and agents to take more risks and invest in translation”.

“Part of the reason I became a translator in the first place was because Anglophone or Eurocentric writing often felt quite parochial,” she said. “Setting up Tilted Axis Press came from a similar impulse; our focus on Asian literatures – where linguistic experimentation is informed by daily lives shifting between languages – is a brilliant way of discovering the stylistic innovation and non-conforming narratives that most excite us.”

Waterstones fiction buyer Chris White agreed, telling Flood, “We’ve now reached a stage where not only are people happy to read fiction in translation, they are positively seeking it out. Currently 25 percent of our top 20 fiction titles are translated and if more were published I’m sure that percentage would be higher still.”

White added that the popularity of Scandinavian crime novels had helped to ease the fears that many readers might have had about reading fiction in translation.

More on translation is in our story from Lena Prisner this week, PEN World Voices: Assumptions and Frustrations in Non-Fiction Translation.