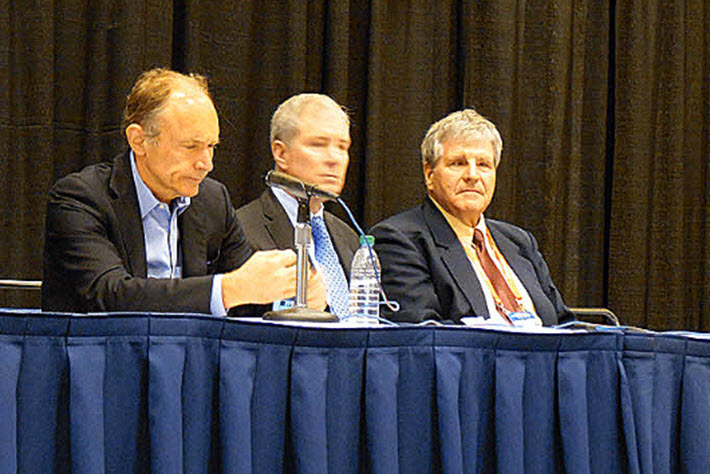 ‘The convergence between books and the Web is really, really important,’ Tim Berners-Lee tells the #IDPFDigiCon audience. All else seems less certain. Looking for direction, what may be the last IDPF “DigiCon” conference is at Chicago’s McCormick Place West as BookExpo America opens — and as IDPF’s future is debated. Image – Porter Anderson

‘Hello, We Must Be Going’: Is IDPF on the Way Out?

In its early going, the “Midwestern BookExpo America” (BEA) seems punctuated with questions.

“Why Chicago?” is the umbrella inquiry you hear rain-dampened cohorts putting to each other on the vast escalators of the McCormick Place West exhibition complex.

“The move to Chicago has resulted in almost 1,000 more attendees from Illinois and a significant increase in attendance from States including Michigan, Missouri, Iowa, Ohio, Kentucky, and Minnesota. The uptick reinforces the purpose of a Midwest convention, broadening the reach and exposure for independent booksellers, publishers, and authors.”

Of course, that move to Chicago is also cutting back on attendees from New York City, American publishing’s hub and BEA’s customary base. And some who make it to Chicago may be surprised to find themselves homesick for the Jacob Javits Center. This year stands as a one-time expedition across the Hudson: BEA is set to return to the Javits in Manhattan next year, running May 31, June 1 and 2 there.

On Tuesday (May 10), roughly 350 attendees gathered for the annual pre-BEA conference produced by the International Digital Publishing Forum (IDPF). #IDPFDigiCon, as it’s hashtagged, isn’t to be confused with that “con” of a different demeanor, BookCon — the boisterous, mostly-YA consumer-facing entertainment event from Lance Fensterman’s ReedPOP on Saturday, featuring Veronica Roth and others. Nevertheless, we fanboys and -girls of Sir Tim Berners-Lee, the man behind the World Wide Web, were eager to see and hear him speak on “Realizing the Vision of Publishing Technology Being Web Technology.”

But by the time “TBL” took the stage, a cloud hung over the confab. Berners-Lee also has established the World Wide Web Consortium, called W3C, of course, and a part of the motivation for his appearance at the IDPF show, it turns out, was the formal announcement of a proposal to have IDPF (the agency for EPUB standards) be subsumed into W3C.

While early news of this idea was published in late April by Publishers Weekly, the IDPF leadership didn’t seem to anticipate the pushback that quickly was developing from some of its members — especially not at a midday news conference called to elaborate on the idea, with Berners-Lee on hand. W3C CEO Jeff Jaffe spoke to the merger’s likely ability to “accelerate the convergence” of Web and publishing standards and of how the original inception of the Web itself wasn’t unlike publishing in many ways. “When people author books in the future, the nature of curated books will change,” he said. One of the biggest advantages, he told the news conference, will be making Web documents portable.

It was OverDrive President and CEO Steve Potash who, during the news conference, asked IDPF heads Bill McCoy and George Kerscher to clarify just what voting stance IDPF members would have in W3C if those members approve the integration of the two groups.

McCoy spoke readily of the importance of developing a “horizontal solution” to many issues around EPUB standards, something he sees more easily implemented by the Open Web platform standards of the W3C, a much larger body with a fully international reach.

McCoy, noting that the kind of question Potash was raising was for the membership meeting to comeon Wednesday (May 11) here at BEA, promised an “open and transparent” process in terms of membership comment. But when pressed by Publishers Weekly’s Cal Reid, he conceded that the plan involves IDPF being “absorbed.” It will effectively be lost as an entity of its own, its remaining members instead functioning in a “publishing activity group” within W3C.

All parties are emphasizing that there is no hard decision yet — and no declared deadline for one. The input of the W3C and IDPF memberships is to be registered and carefully considered.

But if a proposed merger between IDPF and the World Wide Web Consortium (W3C) comes about by the projected January 2017 date, it’s questionable that there will be another IDPF conference.

All of this made it peculiarly unsettling that Berners-Lee’s keynote to the conference plenary was at many points not fully coherent to many in the room. This is a man seriously respected by so many of us for his conceptualization while at CERN of the content management and hypertext scheme we know now as the World Wide Web. It’s his work that makes the Internet intelligible to most of us.

He has spoken in the past of having reached a “higher level of abstraction” when he conceived of the idea in 1989, 20 years after the advent of the Internet, he noted. As he spoke from several levels of abstraction at times, his infectious exuberance for a convergence of publishing and the Internet generated fast, continual hand gestures, his head bobbing, a speaker busy with his ideas.

But for all the zeal of this fine personality’s reverie, one expert observer who has worked with both IDPF and W3C pointed out that the robust IDPF tweet stream fell largely quiet, not because the crowd was wrapped up in the talk but because it was next to impossible to capture a full, rational line from Berners-Lee’s remarks.

“The convergence between books and the Web is really, really important,” he told the audience in a moment of slower pace. But given to a kind of declaration-then-digression pattern of delivery, Berners-Lee didn’t get many of his other thoughts over with such grace to the audience, which strained to catch his asides in the pell-mell rush of his commentary from the podium.

The rest of the conference day was comparatively pedestrian and at times given to more listing of what great things data can mean to publishing than most publishers today still need to hear. A highlight was Kobo’s Michael Tamlyn, whose now familiar message that ebook adoption is being driven by users in their 50s, 60s, and 70s (his “silver foxes”) has real currency. There was good programming emphasis on issues of accessiblity and libraries, as well.

In part, he was responding to Kerscher’s expressed concerns that IDPF is a fast-moving standards organization in EPUB development while the W3C processes are known to move much more slowly. But the overall tenor of the contested merger proposal and Berners-Lee’s welcome news-conference clarity fixed a stubborn pall over the rest of the afternoon: it had become apparent that this might be the last major conference conducted by something called IDPF.

“At the end of the day, you make trade-offs” when you merge entities, Berners-Lee told the news conference. He asserted that W3C is not looking for IDPF to be handed over to it. “We are interested [instead] in merging communities,” he said.

“You guys talk about it tomorrow” at the membership meeting on Wednesday, said Berners-Lee, who was headed for Boston. “You can say yes, you can say no.”

And that concluded a strange news conference held by an IDPF-in-doubt, the curtain raiser to an uneasy BookExpo America trade show so far from its usual home.