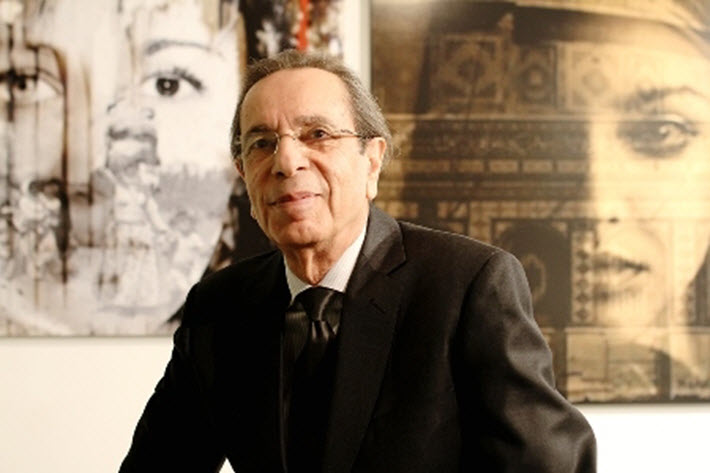 The ninth iteration of the prize carries a US$50,000 purse and honors the 70-year-old Palestinian-born writer. Presented this week in a ceremony in Abu Dhabi, the International Prize for Arabic Fiction may be have its greatest gift in the fact that most of its winners have been translated into English. As we observe Rabai al-Madhoun’s success with the prize, this year, you can find an extensive list of IPAF honorees’ translations on this page of the prize’s site. — Porter Anderson

‘It Wasn’t Easy To Be Longlisted and Shortlisted Twice’

Rabai al-Madhoun’s Destinies: Concerto of the Holocaust and the Nakba, published by Maktabat Kul Shee, has been named winner of the ninth International Prize for Arabic Fiction (IPAF).

“In addition to winning US$50,000, Rabai al-Madhoun is guaranteed an English translation of his novel,” according to a news release issued Tuesday (April 26) by IPAF organizers, “as well as an increase in book sales and international recognition.” “Rabai al-Madhoun, Palestinian-born but now a British citizen, lives and works in London as an editor for Al-Sharq Al-Awsat newspaper.

“Al-Madhoun’s family emigrated from Ashkelon, Palestine – now Israel – to the Gaza strip after the 1948 nakba exodus.

“Leaving Gaza to attend Alexandria University, he later became involved with the Palestinian liberation struggle as a member of the Democratic Front for the Liberation of Palestine.

“He left activism in 1980 to focus on writing and has written a number of works of fiction and non-fiction. This is the 70-year-old author’s third novel.”

Written in four parts, this novel — described by IPAF as “pioneering”  — chronicles Palestinian life both in occupation and in exile.

Per the news release:

“Destinies chronicles Palestinian life both in occupation and exile. Each part representing a concerto movement, the novel looks at the holocaust, the Palestinian exodus from Israel in 1948 (known as the nakba) and the Palestinian right to return.”

The book examines everyday Palestinian life, IPAF organizers say, “telling the story of Palestinians living under occupation and compelled to assume Israeli nationality, as well as exiled Palestinians trying to return to their now-occupied home country.”

Speaking on behalf of the 2016 judging panel, Emirati poet and chair of the prize jury Amina Thiban is quoted saying:

“In Destinies: Concerto of the Holocaust and the Nakba, Rabai al-Madhoun invents a new fictional form in order to address the Palestinian issue, with questions of identity underpinned by a very human perspective on the struggle. This tragic, polyphonic novel borrows the symbol of the concerto, with its different movements, to represent the multiplicity of destinies. Destinies can be considered the complete Palestinian novel, travelling back to a time before the nakba in order to throw light on current difficulties faced by the Palestinian diaspora and the sense of displacement felt by those left behind.”

In an interview with IPAF, Al-Madhoun was asked what he was thinking when he learned he had won:

“At the very moment I won, I thought: ‘I did it!’ I’ve been shortlisted before and missed the Prize. It wasn’t easy to be longlisted and shortlisted twice: I’m 70 and I don’t think I’d have another chance to win. It will take another three to four years to write my next novel, and who knows if I’ll still be alive. It’s time for it to be a Palestinian winner.

“I thought all about the readers who live under occupation; for them this is a great cause for celebration. I am going back to the Palestine book fair in Ramallah on 12 May. I had talked before to one of my friends, the Minister of Culture, and told him: I hope I can come back to Palestine as the winner – this would be a wonderful thing.”

Destinies: Concerto of the Holocaust and the Nakba was chosen by the IPAF judges as the best work of fiction published within the last 12 months, selected from 159 entries from 18 countries across the Arab World.

The other shortlisted finalists each receives $10,000.

The Prize is supported by the Booker Prize Foundation in London and funded by Abu Dhabi Tourism & Culture Authority (TCA Abu Dhabi) in the UAE. A statement on the prize’s site clarifies: “Although the prize is often referred to as the ‘Arabic Booker’, this is not instigated or endorsed at all by IPAF or the Booker Prize Foundation which are two completely separate, independent organisations, and IPAF is not in any way connected with the Man Booker Prize.” itself.

In news of previous IPAF laureates’ titles, Raja Alem’s novel, The Dove’s Necklace (Duckworth), will be published on June 2, and Saud Alsanousi’s The Bamboo Stalk (Bloomsbury Qatar Foundation Publishing) was published in 2015.

IPAF 2014 winner Frankenstein in Baghdad by Ahmed Saadawi has also secured English publication with Oneworld in the UK and Penguin Books in the US.

Since 2008, the winning and shortlisted IPAF books have been translated into more than 20 languages.

Several past winners of the International Prize for Arabic Fiction now translated.