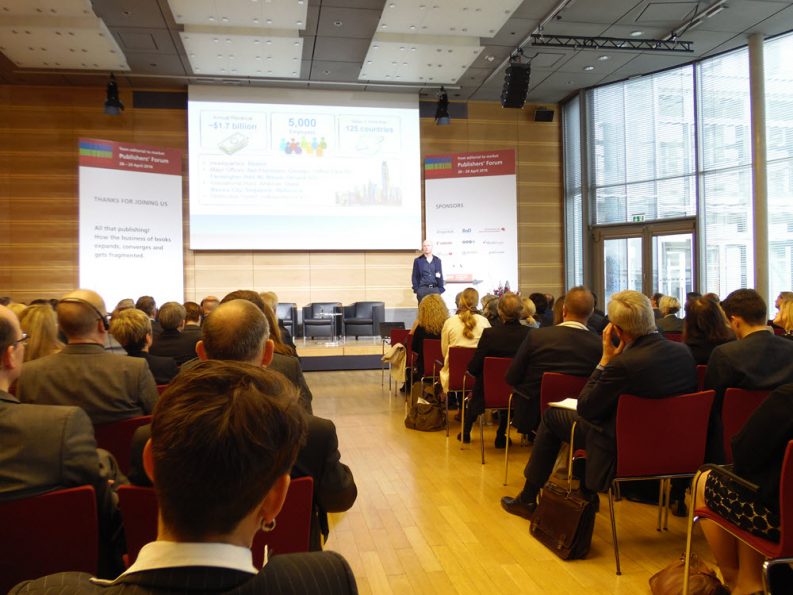 A reluctant industry? At Publishers’ Forum in Berlin, a first day of sessions has exposed what some see to be a surprisingly entrenched reluctance to embrace data’s central role in building relationships with consumers. We Are ‘Right at the Start of the Disruptive Process’

“The hallways” is a term you may know well if you’ve spent much time at publishing conferences. It refers to the conversations that happen during coffee breaks, lunch hours, and before and after formal sessions: the networking.

Rüdiger Wischenbart’s Publishers’ Forum here in Berlin is known for its good “hallways,” lots of break time to chat, meet, exchange ideas. And in its 12th annual iteration — this year at the smart DBB Forum Berlin on Friedrichstrasse — a healthy hubbub erupts each time the delegates get together between meeting rooms.

One of the key questions you hear, however, may indicate that publishing conference presentation might be in a more advanced state than certain elements of publishing, itself:

“How can we get into this data-collection thing?”

That line was heard during an afternoon workshop on Thursday, the first of two days here at #PF16. Matt Turner of MarkLogic, which follows Klopotek’s lead in sponsoring the conference, had broken his workshop into four task-groups on the overall issue of consumer data — what it’s for, how to get it and, most importantly, what to do with it once it’s in hand.

Some more questions and comments from the session looked at challenges in publishers grappling with consumer data:

The concern, as quietly conceded by several experienced delegates we’re speaking to at Publishers’ Forum is simply that such a prominent industry cohort as is represented here is still having to grapple with these very basic questions about the value and intent of consumer data.

London-based publishing specialist Fionnuala Duggan is here in a hosting role, and having joined one of Turner’s four groups, she quipped to the wider workshop: “We had no publishers in our group. We thought maybe they went to another session” to try to avoid the topic of data. And that’s the question many of the most seasoned advisers are asking each other in “the hallways.” How many years of talking about the digital era’s capability and focus on data will it take for the publishing industry to embrace and get to grips with the sheer logic of consumer understanding and analysis? Handed digital’s powerful capacities to deliver insights on the customer, her motivations and his interests, how can many in the publishing leadership still seem unconvinced of the importance of that context?

Maybe this is why Wischenbart’s thoughtful programming started with Enders Analysis’ Douglas McCabe, whose message — familiar to those who have seen McCabe’s appearances at The FutureBook events in London — is an abiding warning:

“Things are not going to settle. Disruption will gather pace. Right now the book industry is right at the start of its disruptive process, not the end.”

That don’t-get-comfortable-folks message is important, McCabe delivers it well, and he laces it with tantalizing bits of research from the team in London:

Where McCabe’s messaging seems to go a bit blurry is at the end of his current keynote delivery when he asserts that physical retail is best for consumers who need to discover content “they didn’t know existed.” That’s physical bookstores. Seeing online discoverability as far less effective — you go there when you already know what you want, he says — McCabe’s big finish Thursday was a rallying cry for the high street: “The most important data publishers can receive will be retail data…supporting physical retail.”

As one observer would later comment, this viewpoint coupled with many players’ fondness for the “print resurgence” story of a slowed ebook growth curve may be part of what is making some in publishing feel that “all that publishing!” — as Wischenbart’s conference branding has it — needn’t worry us, never mind the fact that data, if we have it, might show us that we are simply producing too many books.

(For more on this topic, join us Friday at 11:10 a.m. in Berlin when I’m joined by consumer data specialists Laura Bijelic of Penguin Random House UK and Jens Klingelhofer of Bookwire in a roundtable on “re-thinking ebook sales.”) Another slide from Anki Ahrnell’s presentation. Image provided by Bonnier

Cengage Learning’s Michael E. Hansen’s tale of his company’s turnaround was particularly well-received by the conference audience, taking us from “We as an industry didn’t care about students” — faculty had become the consumer-target of the educational industry — to Cengage’s own drop in a single quarter of 23 percent of sales once students had “voted with their feet” and rejected $150 to $200 textbooks. Facing $5.5 billion in debt, Hansen said, “was the least of our problems. We had never designed a textbook with a student sitting next to us.

Cengage today has a coterie of test-subject students whose lifestyles and learning habits are monitored 24-hours-per-day, Hansen says, as the company expands and deepens its MindTap educational platform software for mobile students.

“We gave them time-management tools. Learning bursts. What you can absorb in 15 minutes.”

Lastly another intriguing local-not-global comment. We’re hearing this more and more, as at the IPA Congress in London earlier this month. “At this stage,” Hansen said, “education is not a global industry. It needs to be understood market by market.” Another slide from Anki Ahrnell’s presentation. Image provided by Bonnier

Other highlights of the day:

Matt Turner introducing that data issue: “Data-rich / data-poor is a mindset.” Publishers must conceive of a customer as “a primary asset” for the data that customer’s patterns will reveal.

PRH’s Bijelic: “Discovery is not a consumer problem. It’s a publishers’ problem.”

Annette Beetz of Random House Germany: “So far, we’ve had a blind date with our consumers. [We’re] trying to move to a relationship.”

Bonnier’s Anki Ahrnell: Publishing gets too focused on the problems, and misses “huge opportunities before us…Your products. Are they for macro- or micro-consumption? Discovered by chance or looked for on purpose?” Ahrnell went on to raise the concept of “an agent for European publishers in China.”

And Profile Books’ Andrew Franklin’s swear-off of apps. “A lot of false starts. We think the future remains in a balance between print and ebooks. The text we deliver.” Publishers’ Forum resumes  Friday, April 29, at 9 a.m. CEST, and the hashtag is #PF16 for live coverage.