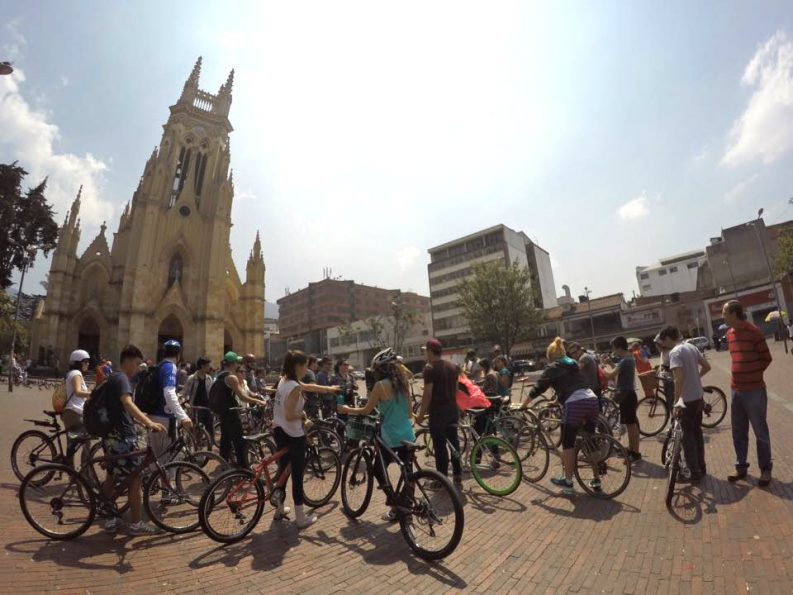 Bogotá’s Laguna Libros has created a novel way of bringing its books and readers together, organizing monthly bicycle rides around Colombia’s capital city in the company of authors whose works portray the metropolis, its history, anecdotes, and architecture.

“We had the idea of taking content to another level, and because we work with Bogotá-born writers,” Laguna Libros’ founder and director Felipe González tells Publishing Perspectives during this year’s Bogotá Book Fair, which closes today (May 2).

“Several of our books have an important relationship with the city, in which Bogotá appears as a kind of protagonist,” he says.

Under the initiative of former mayor Enrique Peñalosa, Bogotá began opening up to cyclists in the late 1990s, building bike lanes and organizing a Sunday ciclovía, in which one of the city’s major thoroughfares, La Séptima, is closed to vehicular traffic.

The city’s pro-cycling strategy has since been adopted in other Latin American capitals. “We thought about doing something interactive,” González says. “We had already become cycling activists, riding a lot and participating in the movement to reclaim the roads from cars, and after which more and more people began to cycle in the city.”

Bringing together cyclists and readers was the next step, and the Cicloreaders project was born.

“We thought that bike rides could also include something else,” González says.

“We all pass by many places in the city that have a history, or stories and anecdotes, but which maybe some people don’t know about, and we wanted to give the bike rides an aesthetic angle.”

Authors who have participated in Cicloreaders’ bike rides as guides include local novelist Andrés Ospina, whose novel Chapinero is set in Bogotá’s neighborhood of the same name; and Miguel Jiménez, Andrés Cruz Barrera, and José Luis Jiménez, whose graphic novel Los once relates the events in 1985 when guerrilla group M-19 assaulted Bogota’s palace of justice. The book’s title refers to eleven civilians who were forcibly disappeared. “The response from the public to the bike rides has been spectacular, although we prefer to keep the groups small, which are easier to organize, and for reasons of acoustics,” González says.

“The rides give everybody who pedals with us a chance to see the city from another angle.”

“We were invited to talk about Cicloreaders in the World Bicycle Forum in Santiago, Chile. It’s a young idea that is acquiring a very interesting dimension and that has caused an echo elsewhere, in the media, among writers, and in other publishing houses,” he says. Laguna’s biggest hit to date has been Memoria por correspondencia, a collection of letters by Colombian painter Emma Reyes, published in Colombia in 2012. Its rights have so far been sold in 17 territories and 15 languages, and the book is to appear as a Penguin Classic.

“The initial idea was to create an editorial laboratory. With my partners, we started from zero, and began with a list of what we wanted to publish. The three of us had studied art, which is not the easiest segment from a commercial point of view, but is the one in which we had the most ideas.”

“Graphic novels, in some ways, represent our original idea, by combining art with narrative,” he says.

Laguna’s first titles were art books, with production of one per annum during its formative years.

“We aimed for products that were accessible, neither specialist nor luxury, and fanzine-style, in black and white.”

“We formed an alliance with Colombian editor Pablo Guerra,” González says. “He’s a graphic novel expert, which for me was an unknown field, but one which I love. I’ve always approached books with ignorance and empiricism, and seek advice from experts who then form part of the team.”

He said the distribution issue in Colombia is complicated not so much by the difficulty of getting books into bookstores, but by the fact that the shops are few and far between. Despite its population of 40 million people, Colombia’s bookstores number around 250.

“Bookstores are very centralized, in just three large cities, and in Bogotá they are only concentrated on one area.” “We began by publishing Colombian writers, and we will continue to do so. But along the road, by going to fairs, we have come across other writers and books that we want to take to our readers, and we have internationalized our catalog,” González says.

“Foreign writers are still a small part of our catalog, five of the current 48 titles, for example, but this year half of our new titles are by foreign authors.”