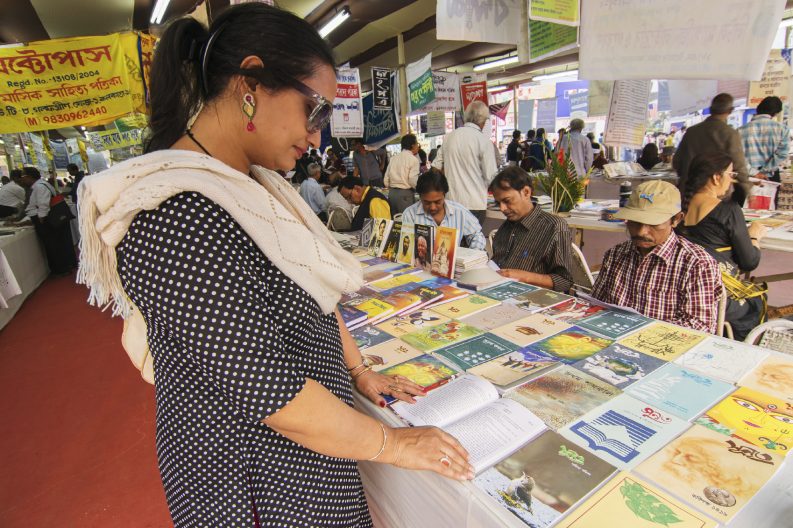 Nielsen’s data ‘suggests that an extraordinary 21,000-plus retailers sell books here.’ Vinutha Mallya’s essay this month describes India’s market as a place of many strengths and many challenges. ‘Local Book Fairs Are a Major Point of Sale’

At  The Caravan: A Journal of Politics and Culture, Vinutha Malla — a contributor to Publishing Perspectives — takes an in-depth look at the state of India’s publishing industry, yesterday and today. “The presence of many representative groups, sometimes working at cross purposes, reduces the collective bargaining power of publishers. The industry federations are also considerably distanced from the situations faced by publishers outside Delhi.”

“Author management is another neglected area in the publishing sector. New writers, especially, often complain that contracts prove daunting to them, and that they are unable to negotiate terms. The complexity of the publishing industry, along with other factors such as global protocols and copyright laws, influences the often-baffling terms of author contracts.

“Most authors are unaware of all the dimensions involved in the process of producing and marketing a book, and are thus unable to negotiate contracts. There are just a handful of professional literary agents in the country, and almost all of them work for the growing tribe of English-language writers.

“Recent data on exports and imports of books suggests that India is a major exporter of books, mainly educational ones, to 150 countries.”Vinutha Mallya

“A few groups representing authors’ interests do exist, such as the India wing of the global organisation the Alliance of Independent Authors, but none of them is big enough to negotiate with publishers. The Authors Guild of India, once a representative body of authors in the country, which continues to be recognised by the government as such, has fallen off the map. New authors trying to get a break are attracted to self-publishing to get around the challenge of finding publishers, and a few take it up with entrepreneurial zeal. Although this is not a new phenomenon — several Indian-language writers are self-published—the technology-enabled tools for self-publishing are making it much easier for new writers to launch their work and thereby potentially be discovered by traditional publishers.”

“No distribution services are available for publishers in Indian languages. Almost all of them handle their own distribution, and some larger publishing houses have their own retail outlets.”Vinutha Mallya

“The National Council for Education Research and Technology, an autonomous organization under the ministry of human resource development, is the single largest publisher in the country. The publishing programmes undertaken through the NCERT and other institutions, such as the NBT, the Sahitya Akademi and the publications division, along with the more than 400 agencies that publish in the public sector, make the government of India the largest publishing agency in the country. The textbooks produced by the central and state governments’ school boards dominate the schoolbooks segment in the country. Private publishers have more room in the higher-education books segment.

“However, not all books available in the country are produced locally or originate in India. Among books in English available in India, many are imported, while others are licensed editions, produced by Indian publishers after acquiring rights from the foreign publishers to print these titles in India or South Asia.

“Many publishers rely on a combination of these three methods to build their businesses. Most imported educational books deal with the areas of science, technology and medicine. Among trade books, fiction and children’s books are popular genres for import. Recent data on exports and imports of books suggests that India is a major exporter of books, mainly educational ones, to 150 countries. Book imports rose in value at a compound annual growth rate of 18.9 percent between 2010 and 2015, while general exports grew at a rate of 10.3 percent over the same period.”

In contrast to “English-language publishing, no distribution services are available for publishers in Indian languages. Almost all of them handle their own distribution, and some larger publishing houses have their own retail outlets. Local book fairs are a major point of sale.

“The annual Kolkata and Chennai book fairs, organised by the publishers’ associations of West Bengal and Tamil Nadu, respectively, help many Bengali and Tamil publishers make nearly half of their annual sales.

“Privately organised book fairs that travel the hinterland are popular in some states, such as Maharashtra. Fairs organised by the NBT, in big and small cities and towns, also help readers access books in their languages.”