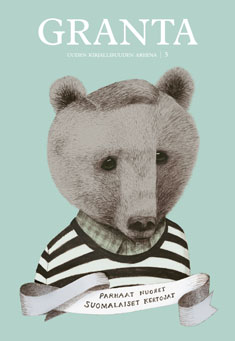 “There was a call for this kind of publication.” In keeping with its international vision, Granta has launched Granta Finland with the Otava Publishing Group in Helsinki and under the editorship of Aleksi Pöyry, fiction editor at Otava.

Despite Granta’s international status, Pöyry says, “Before we started publishing Granta Finland last year, Granta was not really that widely known in Finland. There are many wonderful literary magazines in Finland, but Granta‘s format—a 200- to 300-page magazine focusing on new short stories and essays by literary authors—is something that we actually haven’t had in Finland before. One could say that there was a call for this kind of publication here.”

Finns are dedicated readers, and among adults, novels by Finnish authors are especially strong. Currently, one of the biggest literary trends in Finland is historical fiction. Pöyry says, “what is interesting is that many young authors have turned to the most defining moments in 20th-century Finnish history—the civil war in 1918, World War II [where the Finns proudly gave the Red Army a fight for the ages]—and have started to deal with them in new and exciting ways. Another Finnish publishing trend is humor: we Finns are sometimes regarded as silent and gloomy people, but there is actually a lot of humor in the Finnish culture, and now it is also coming through in many novels by Finnish authors. Both of these trends are also strongly in evidence in our ‘Best of Young Finnish Novelists’ issue of Granta Finland.”

What Pöyry finds particularly exciting “is how the diversity of Nordic literature is getting more and more international recognition. It started with Scandinavian crime, but now many kinds of books by Nordic authors are enjoying success. I would like to add that Granta Finland’s ‘Best of Young Finnish Novelists’ issue is also wonderfully diverse in its themes, styles, and genres. In the issue, there is historical fiction, humor, absurdist fiction, psychological suspense, family stories, as well as speculative fiction.”

During a time when many literary magazines are moving to to “online-only” formats, Pöyry sees that “the growth of e-reading hasn’t been that fast in Finland, and a large majority of people still prefer to read their books in printed form. However, we are strongly going forwards on the e-publishing front.” Still, he adds, “I believe there will be a notable increase in e-reading in the coming years. With Granta, most of our sales come from the printed magazine, but we have also published an e-book version of our ‘Best of Young Finnish Novelists’ issue, and we also have single pieces from Granta available in electronic format.”