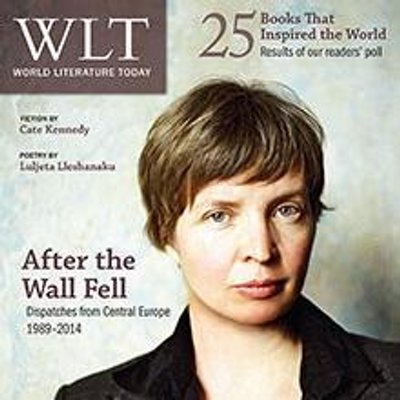 The November issue of World Literature Today focuses on central European literature since the Berlin Wall fell in 1989. And in honor of that, it’s editors asked 25 writers to nominate the one book that had the most influence on their writing or way of seeing the world.

Nominations were open to any book-length book – written in any language and published since November 1989 – with the one stipulation that it be available to read in English.

From a longlist ranging from Ambai’s A Forest A Deer to Ted Hughes’ Birthday Letters to Andrey Kurbov’s Death and the Penguin to Grace Paley’s Collected Stories to Tom Reiss’ The Black Count: Glory, Revolution, Betrayal, and the Real Count of Monte Cristo (see the complete longlist here), readers were invited to vote for their three favorites.

Here are some of the top ten winners, along with the nominating statements:

Nominated by Maaza Mengiste: “Anderson’s carefully researched and superbly written biography of the revolutionary hero complicates the brand name that Che has become. In this book, we meet a man both flawed and dogmatic, with such focused and unbending ideals that they lead him to down paths that many of us will find problematic. What does it mean to truly believe in revolutionary ideals? What does it mean to live them? Everything about this book—its writing, its precision and passion, its unflinching gaze on the real costs of a revolution—changed the way I think about the world”

Nominated by Elif Shafak: “It was so hard to pick just one book, but I’d love to nominate Middlesex, by Jeffrey Eugenides. It left an impact on me, this novel—when I first read it, it was like opening a secret door. The story of a hermaphrodite spoke to me, the epic tale of an individual and the story of a family/culture/society intertwined. It is a narrative that equally embraces sex, gender, culture, and perhaps offers a new form of politics and resistance, all of them close to my heart.”

Nominated by Denise Chávez: “I have been deeply impacted by the Spanish writers and what they are doing to create a world of dark magic and redemption from that darkness. The book that has intrigued me deeply is The Shadow of the Wind, by Carlos Ruiz Zafón. It is so inventive and so startling in its concept.”

#7 Art Spiegelman (Sweden/U.S.), Maus: A Survivor’s Tale (1991), Random House
Nominated by Miriam Katin: “The stories of our survival during World War II, the fate of our family and the years after the war, were always a constant running narrative in my mind through the years. They were an unwanted, uninvited presence. They begged to be told. Spiegelman’s graphic novel Maus gave me the permission to draw my stories. You could call it inspiration as well, but it ran much deeper than just being inspired. It started my life in books.”

Nominated by Andrew Lam: “I know it’s quite popular and was made into a movie that was nominated for an Oscar, but for me personally, Atonement demonstrated the power of language, of storytelling, and of imagination on a level I hadn’t thought of before: to atone. To turn guilt and sadness into aesthetic expression. One of the loveliest books I have read in the last decade.”

Nominated by Krys Lee: “Orhan Pamuk is a writer obsessed with time and how culture moves through historical time, and how Turkey negotiates tradition and modernity, a modernity that in many of his novels is betrayed to be a modernity synonymous with the West. The White Castle, an early work of his, makes these themes central to understanding a country that is geographically and culturally at a crossroads of the East and West. This engagement with the crossroads of culture and time is continued in his masterpiece, My Name Is Red. My Name Is Red is both artful, inventive in form, and one of the most artful and intelligent works to examine the struggle of a country and tradition, sometimes rejecting and accepting a Western version of modernity, with dramatic consequences. Through methods of Western realistic painting that clash with a Chinese-influenced abstract tradition of classical truth in sixteenth-century Istanbul, Pamuk examines Turkey’s historical and presently continuing negotiation between two cultures. As a rare, astute examination of the struggle of so many nations today caught between tradition and a modernity dictated by the European and North American cultures, I believe it is one of the most important books written in the past twenty-five years.”

To see the top four titles, including a somewhat surprising #1, click here.