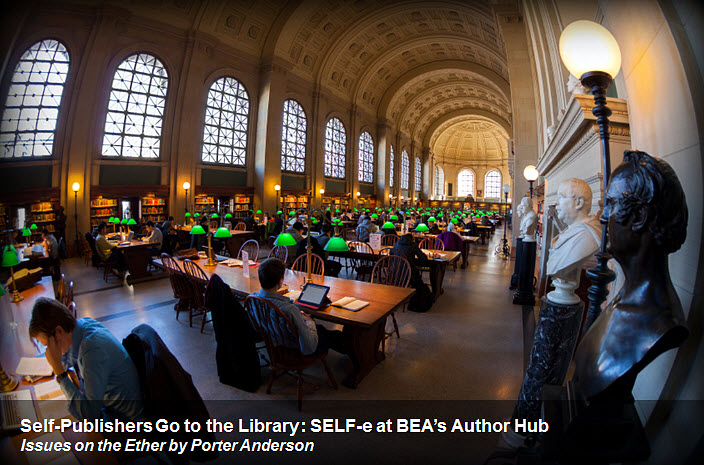 Both in their books’ sales potential and library access, self-publishing authors will find encouragement next week at BEA’s Author Hub.

Publishing Perspectives Editor in Chief Edward Nawotka and I will host a live Twitter chat on this week’s Ether topics — a new initiative to get self-published books into libraries and Hugh Howey’s latest AuthorEarnings report — at 11 a.m. ET / 8 a.m. PT—and that’s 4 p.m. BST in London. We’ll use the hashtag #EtherIssue as we do weekly. Join us and watch for @PubPerspectives and @Porter_Anderson on Twitter. The first-ever uPublishU Author Hub has its ribbon-cutting at 10 a.m. on Thursday May 29 at BookExpo America (BEA). You’re most welcome to join us if you’re there with a BEA badge.

Author C.J. Lyons, as mistress of the ribbons (I just made that up) will hand off to her fellow “Indie Bestseller,” the author Hugh Howey. And Howey will lead the first programmed session in the Hub, discussing findings and interpretations of his brand-new May 2014 Report from AuthorEarnings.com.

Along with Howey and Lyons’ co-headliners in the Hub — Bella Andre, Barbara Freethy, and H.M. Ward — the entrepreneurial authors who are members of the Author Hub will find a lot to think about, a lot to be encouraged about, in what Howey has to say. As detailed in my report at Thought Catalog, New Howey Report: Self-Published eBook Authors May Out-Earn The Rest By 27%, Howey’s project to develop quarterly data for authors this time (the follow from February’s debut) shows a healthy stability in the methodology, and a couple of intriguing points about the volatility of new titles vs. backlist long-tail material, for both traditionally and self-published authors.

As Howey writes in the new report, devised with the help of his as-yet unnamed author-associate, “Data Guy”:

As self-published authors build their own backlists, and as more of these authors employ freelance editors and cover artists and pay attention to quality, could there be a future where self-published authors as a cohort are earning a good deal more than traditionally published authors? Our advice to an aspiring author today might be to do one of two things: either build a time machine and travel ten years into the past to query their work — or self-publish today.

The new report may well raise new controversy around the Howeyan attempt to help authors determine a project’s best path to publication. As he and I will be discussing onstage at Writer’s Digest’s Annual Conference in New York and at its Novel Writing Intensive in Los Angeles. I can tell you from my experience of a live conversation with him and Publishing Perspectives Editor-in-Chief Edward Nawotka this month in Berlin at Klopotek’s Publishers’ Forum, Howey will be ready. The guy is always in command of his material and has an abiding passion for this project to support his fellow authors as they struggle, as he has done, to choose how to publish their work.

But Checking Into a Library?

One thing that has slowed down many who might have liked to consider self-publishing is the quandary of how to get their books into libraries.

There have been some exceptions. One was the Smashwords agreement Mark Coker made with Califa, the California public library consortium, for some 10,000 books made available per Smashwords authors’ opt-in on the program. There’s coverage of that here in a 2012 story in Writing on the Ether at JaneFriedman.com.  (Coker will speak in the Author Hub, by the way, at 12:30 p.m. Friday May 30.)

Well, the Library Journal and BiblioBoard believe they have the answer.

It’s called SELF-e, and its new site is just up.

On Thursday May 29 at 1:30 p.m. in New York, Biblioboard’s Mitchell Davis and Library Journal’s Ian Singer will be in the BEA Author Hub to meet with writers and explain the new program.

SELF-e is a curated program. And immediately on getting that point firmly in mind, you’ve encountered what has been one of the biggest barriers to librarians’ interaction with the self-publishing community: how can librarians possibly face the massive wave of self-published books? — that “tsunami of content,” as Amazon’s Jon Fine likes to call it. When I asked C.J. Lyons why she has officially endorsed the new program, she told me that it brings the library network into the discoverability effort for new books:

With so many books out there, authors and readers, both, rely upon libraries for discoverability. I’m so excited by [this] new partnership that will make it easier for authors and readers to connect–and for libraries to maintain a growing catalog without it becoming overwhelming.

If an author’s book is chosen to be included, then that author provides Library Journal with a non-exclusive license to make the book available to for library subscription programs. There are no restrictions on promoting and selling these ebooks “to any market,” the SELF-e material says, “including the public library market via other vendors).

If not chosen for the SELF-e platform, a writer still can get her or his ebook into “a statewide module with other local authors.” That localized module won’t be curated as the main program will be. First selections from entries offered by their authors (see the site for instructions) will be chosen later this year after a summer and fall curation period handled by Library Journal.

Another exciting point: the program is developing a “transparent system for all authors to see how many people are reading their ebooks and where those people are.” They expect that part of the program to be ready about a year from now.

In his statement in support of the initiative, Howey writes, “The SELF-e approach to curation combined with simultaneous user-access will encourage books to be discovered and even go viral.”

Librarians will be glad to know that there are no limits to how many submissions they can take from local authors for inclusion in their (non-curated) statewide modules.

Those librarians will also avoid the headaches of patron complaints about restrictions. “there are no wait lists or turnaways,” the material from SELF-e says, “and no time limits on checkouts.”

The homepage at the SELF-e site has an FAQ for both authors and librarians (scroll down to see it). And BiblioBoard already has modules (themed collections of material) in place, including its British Library: Common Core Learning module.

Lyons relates her own excitement about SELF-e to her childhood: “As a child, libraries were my portal to the universe, both real and imagined. How thrilling it is to be able to help readers of today and tomorrow never be without a good book.”

And that’s a good place to start with some questions for our #EtherIssue live conversation Wednesday. When we asked our Wednesday #EtherIssue conversation colleagues last week about the Hachette-Amazon standoff over contract negotiations, we got an admirably restrained, sensible discussion. It’s one of the things that tends to hallmark our Publishing Perspectives live chats — mutual respect and level-headed, mature debate, a big credit to our readers.

This is a volatile issue, of course, as is anything to do with Amazon and publishing. And as we go to press on this edition of the Ether, there is word from Frankfurt that three Swedish-owned German publishers may be encountering contractual tensions with the Seattle-based retailer, as well.

Here are  a few of the tweets that were exchanged during our discussion. We’ll look forward to seeing everyone online Wednesday.

@Porter_Anderson of course it's the authors. they are losing money, or rather not getting potential sales #etherissue

.@Porter_Anderson Hi Porter – the Seattle Times made sure that readers in Amazon's hometown became very aware of the issue. #EtherIssue

@Porter_Anderson @Forbes @Amazon may not be the agressor. We don't know all issues in dispute. #EtherIssue

A friend's book was released by S&S during the B&N standoff. She was very upset. Didn't help that her editors kept quitting. #etherissue

@abbyquillen Yeah another example of authors hurting while the retailer and publisher fight it out. Not a good situation. #EtherIssue

And just a note in closing that our final tweeter there, the author Michael Sullivan, has since written a Digital Book World Expert Publishing Blog post on his experience of this as an Hachette author.

You can read his piece here: An Author’s Perspective on the Hachette-Amazon Battle.