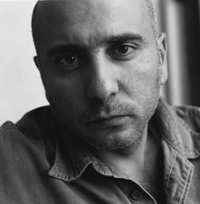 Rawi Hage is a featured speaker at this year’s Abu Dhabi International Book Fair. He will be speaking with Nezar Andary on Thursday, April 25 from 5:45–6:45 p.m. at The Tent. Register for the book fair here.

MONTREAL: Lebanese-Canadian author Rawi Hage finished his third novel, Carnival, about the chaotic life of a taxi driver, during a yearlong residency in Berlin. Published last fall by House of Anansi, it quickly earned reviews such as this one in Canada’s Globe and Mail: “What I thought of Hage and [his second novel] Cockroach is reaffirmed and reinforced by Carnival. The things that make Rawi Hage a major literary talent include freshness, gut-wrenching lyricism, boldness, emotional restraint, intellectual depth, historical sense, political subversiveness and uncompromising compassion.”

To say that Hage began his literary career with a bang would not be an exaggeration — his first novel, De Niro’s Game, won the 2008 international IMPAC Dublin literary award, beating competitors such as Thomas Pynchon and Philip Roth. Already in his mid-40s when his first book was published, Hage had left his native Beirut during the civil war in 1984, lived and worked odd jobs in New York prior to landing in Montreal where he drove a taxi and studied fine arts and photography. When he began to write, it was in English, which is not his mother tongue. Hage grew up speaking Arabic and was educated in French but living in New York he had gotten into the habit of operating in English.

Choosing English Over French or Arabic “It wasn’t an ideological or political decision, it was just circumstances and immigration displacement. Language becomes a necessary tool for survival,” said Hage. But Hage’s case is a perfect illustration of how English is not only a bridge language but also one that is used by writers today who are not necessarily from the former British Empire. Hage’s “gut-wrenching lyricism” perhaps echoes the poetry in Arabic; his complex, fashioned, sentences remind one of French.

Although Hage’s books have been translated into both French and Arabic, he said, “I don’t think the Arab world knows of my existence. Frankly, it hurts me that I’m so eclipsed in the Arab world. And the Francophone world doesn’t care about writers who write in English, they are attached to the French world.”

Northern American cities are the backdrop for Hage’s vast cast of characters in his two books following De Niro’s Game, which is set during the civil war in Beirut. His cities are filled with exiles living a psychedelic cosmopolitanism in an ambiance of restlessness, which evokes mentally living in several places at once. Referring to Carnival, Hage said, “Like all my novels there’s a multiplicity of geographies in it. There’s always a va et viens, I’m not homogeneous.”

A Home in Montreal In this sense, Montreal suits Hage, who said that it’s a city in which “language is contested, everyone feels or seems like a minority; the anglos [sic] feel like a minority, the French speakers are a minority in Canada, it reminds me of Beirut, everything is contested and negotiated, and in a bizarre way I feel very much at ease and happy in this contingent atmosphere.”

Hage has been writing full time for eight years now, and remarked that although his work has been translated into many languages and reviews have been “great, I’m not a big seller. I don’t compromise with my writing.”

He feels his writing has become “more meaningful, and there’s a price for that. If all fails I can always teach,” he adds.

There will most likely be an aspect of the Middle East in all his novels, said Hage, one of the reasons being that “it was the birthplace of three major religions; I have a dialogue with religions, it’s a history I know well. Religion is very paradoxical for me—I have a religious style of writing: there’s something grandiose, direct and authoritative, there’s repetition, sequences, and poetic stretches. I feel like some kind of prophet speaking but at the same time the content champions secularism.”

It’s not a far stretch to see Hage as a sort of prophet—a cosmopolitan, secular one with a wicked sense of black humor.

This article was sponsored by the Abu Dhabi International Book Fair.

DISCUSS: Going to Abu Dhabi? Got a Great Story? Let Us Know