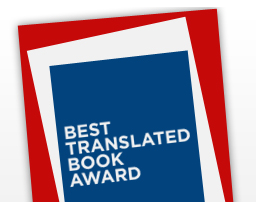 The finalists for the Best Translated Book Award in fiction and poetry have been announced. The award, founded in 2007 by the Three Percent weblog and underwritten with $25,000 in prize money from Amazon.com, exists to help bring attention to great works of international literature published in the previous year.

The winning books will be announced on Friday, May 3rd at 5:30 p.m. at a PEN World Voices/CLMP Fest event taking place in the Washington Mews in New York City. The event is free and open to the public, and will be followed by a street party.