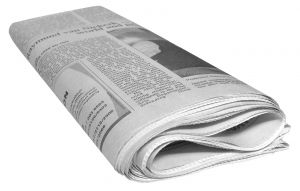 As we all know, the traditional book business is notoriously slow. Literature takes time to develop. Novelists in particular need years to craft a story that might reflect current events. Add to that years to sell foreign rights and translate a story. It might take a decade before a novel reaches across borders and explains what’s happening in an overseas country to a new audience, a situation described in today’s feature story “Against Totalitarianism: Syria’s Nihad Sirees on Fiction and Morality,” in which it is noted that it took eight years for Sirees’ novel The Silence and the Roar to appear in English. Thankfully, it was even published in English, especially now that Syria continues to wage a bloody civil war that has taken tens of thousands of lives.

But when it comes to daily newspapers, their job is to be in front of the news, or at the very least on top of it. It has been noted time and time again that the United States’ paper of record, The New York Times, is consistently behind the, ahem, times, when it comes to reporting many important trends and news events. Whether it’s something as frivolous as the fact that men are now dressing up more (something anyone who has gone south of 14th St. in the last five years could have told you), to much more pressing stories, like the escalating battle between between ver.di, one of Germany’s largest labor unions and Amazon.

This story broke in in the middle of last month, after the February 12 broadcast by one of Germany’s two main public television networks of a documentary examining the treatment of some of the 10,000 temporary workers hired by Amazon last year to help with the holiday rush. Many of those workers had been brought in from countries such as Spain and Romania, places where the economy is weak and jobs are scarce. It prompted our own, some have called it sensationalist, discussion piece asking the question: “Are Amazon Warehouses the Equivalent of Modern Day Sweatshops?” And we were hardly the only one’s who took note of it; most of the newspapers in Europe jumped on it immediately, which is why we even knew about it in the first place.

The New York Times managed to weigh in on Amazon’s travails just this past Sunday. And though they do tie it into the context of the upcoming national elections, where the left-leaning Social Democrats will be challenging the government coalition led by Chancellor Angel Merkel’s conservative Christian Democrats, you have to wonder what took them so long?

The Times also points out that “Now it seems to be Amazon’s turn to serve as a symbol for everything that many Germans resent about American-style management and so-called Anglo-Saxon capitalism. As an American company that has helped drive out at least one German competitor out of business [Editor’s note: who is that exactly?] and makes heavy use of temporary workers, Amazon is a ripe target.”

Yes, well, there has been festering resentment of the largest American companies — especially those working in the cultural sphere — for a very long time.

They, unlike the rest of us, were able to extract a quote from Amazon about the situation: Dave Clark, Amazon’s vice president of worldwide operations, responded to The Times by phone from Seattle. “We are unhappy with what we saw. We’ve got to become world class in managing the accommodations of those folks versus delegating to a third party. That is a lesson we learned this holiday.”

And it is for this reason that The New York Times needs to be more on top of these things: they are one of the few institutions that has the clout to even get Amazon to say something on such a high profile issue. When they report on it, it becomes a legitimate issue.

On so much else that they cover about publishing, always seemingly 18 months behind, we can live with it. Hey, look, self-publishing is a big deal! Hey, look, ebooks are a big deal! Hey, look, bookstores are struggling. Okay, we can put with the “gee-whiz” approach they’ve taken to key issues in the book business, no matter how fundamental they are. That is why you come here to read us, or go to Laura Hazard Owen’s work at GigaOm, or subscribe to Publishers Lunch, or attend Digital Book World every year. You need to know because it is part of your business.

But the broader reading public, the consumers we all depend on in the book business, deserve better than the Times slow reaction to so very much in our increasingly fast-paced evolving culture.