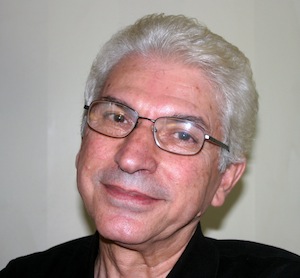 Nihad Sirees, whose novel The Silence and the Roar is published in the US today, reflects on the role of a novelist in the midst a totalitarian state. Excerpt fromThe Silence and the Roar:

“In my country people love rhymed speech and rhymed prose and inspirational metred verse. Just watch how they will repeat phrases that have no meaning whatsoever but that rhyme perfectly well. In the end this means that if the ruler wants the masses to adore him he must immediately set up a centre dedicated to the production of new slogans about him, on the condition that they resemble poetry because we are a people who love poetry so much that we love things that only resemble poetry.”

Syrian writer Nihad Sirees has just returned to the US from a whirlwind trip to the UK where Pushkin Press published The Silence and the Roar, his first book in English, translated by Max Weiss, which won the 2012 PEN award. A trained engineer, Sirees has been writing novels, plays and screenplays since the 1980s.

In the excellent The Silence and the Roar, first published in Arabic by the Lebanese Dar al-Adab, a 31-year-old banned writer Fathi recounts one sweltering day in an unnamed city where crowds are celebrating the 20th anniversary of a dictator. As he pushes his way through the chanting masses, visiting his mother, his girlfriend Lama, his sister, a hospital and the Party building to retrieve his confiscated ID card, Fathi’s reflections on keeping his moral sense alive within a totalitarian state are written with humor, resolution and a touch of despair. Like his protagonist Fathi, Sirees was excluded from publicly expressing himself in Syria and his books have been banned there since the 1998.

Sirees left his home in Aleppo, in January 2012. He first went to Egypt, and is currently an International Writers Project fellow at Brown University. Other Press in the US is publishing The Silence and the Roar today.

Publishing Perspectives: The Silence and the Roar was published in Beirut in 2004. It came out in Germany in 2008, in France last fall and it was just published in English. How does it feel to talk about your novel nine years after you wrote it? When you were writing it did you think about the possibility that the regime might fall?

“The concept of tyranny is still worrying the world, especially the Syrian people,” says Nihad Sirees.

Nihad Sirees: This book is like a mirror of the year it was released but the incidents and events haven’t stopped. Now it is clear what I was talking about. I was talking about tyranny in its general concept. The concept of tyranny is still worrying the world, especially the Syrian people. At the time I wrote it the regime was very strong. Maybe at that time I dreamed of the fall, but I am not sure. This book tries to push people to be courageous, to find a way to face or confront the regime. I talked about laughing—every totalitarian regime tries to spread fear — if a writer can express himself with humor it counters fear.

PP: Your character Fathi is banned from writing by the government as you were. Your novel could actually take place in any totalitarian regime—did this somehow make you feel less lonely?

Sirees: Kundera, Borges, Sakharov, Marquez, all these writers had the same problems, the same worries about freedom and about human rights, all writers in this world have the same things to tell people. But I think a writer is always lonely. Especially when he sits down to write. He continues to write because he feels he is alone in the world. But in 2004, I also felt that we were defeated, and not only me as a writer. At the time I had been an activist in Syrian society, we wanted to rebuild this society after the regime [of Hafez al Assad] had ended. Intellectuals thought that President Bashar [al Assad] would make some reforms.  But this only lasted a short while, then he stopped everything and decided to continue as his father and this is what led to 2011. If at that time they had made some real reforms and had given some rights to the people, we would not be where we are now. So in 2004 I reacted to the reforms stopping.

PP: Before the violence began in 2011, you lived in Syria and were published outside the country; is this a sort of unspoken agreement between the government and the writer?

Sirees: When I lived in Syria but I published in Lebanon or somewhere else nothing happened to me. I couldn’t make very clear accusations against the President or the Party but I could say things in a roundabout way.

PP: What about self-censorship?

Sirees: Everyone in Syria uses self-censorship because they feel afraid. If you cross a red line your life might be at risk. On the other hand we cannot give up. Literature has a great way of allowing you to say things in a veiled manner in order to avoid any harm.

PP: Now that you’re outside of Syria are you expressing yourself differently?

Sirees: Outside of Syria I can speak more precisely, in my articles and essays I am freer. It is also my duty to explain what is going on in Syria. Everywhere I go, people say to me that they can’t understand what is going on. So I am pushed to shed some light on the incidents. But concerning literature I find I still like to use veiled references.

PP: Is it possible to reflect the tragedy of this terrible violence in literature?

Sirees: I have started to think about how to analyze this violence, how to realize this in a novel. This is what I’m busy with. I was shocked at every Syrian. We know the regime acted criminally in 1982 in Hama [when Hafez al-Assad’s regime murdered an estimated 30,000 people to quell a Muslim Brotherhood revolt] and a whole city was destroyed but something pushed us to put that behind us. Maybe we thought that it was better not to think about that and to look to the future. No one thought about revolution when the Arab Spring started in Tunisia. It was nice to watch it on TV. The Syrian regime doesn’t know how to deal with uprisings without violence so then the Syrians started to go out into the streets to demonstrate against this violence. Violence plays a big role in these events and it was the way the regime inspired fear. But now fear has become real. People are without any sense of humanity, so we are all shocked. What we see now is the reply of some people against the violence of the regime. Like ‘I will show you what you show me’. My country is on a road to nowhere.

PP: Many of the younger Syrian writers use social media to communicate. Have you experimented with it and if so, does it change your way of writing?

Sirees: I use Facebook and Twitter to communicate with people but I am not so good at it… But many Syrians were ready to use these social networks including YouTube, which is a priority because they have been able to archive the revolution from the beginning with mobile phones and it pushed others to cooperate in this revolution. Creative writing is less important now; you have to discuss what is going on today, you have to state your opinion.

DISCUSS: Why Is The New York Times So Behind on So Much?