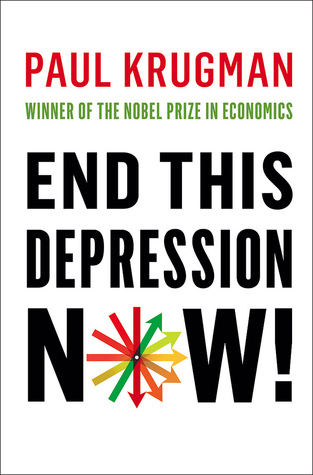 Writing in The Atlantic, Peter Osnos examined the economics of Nobel Prize winning economist Paul Krugman’s latest bestseller, End This Depression Now!, and learned that depending on where one purchases the book, the price can vary by as much as $15 — a variance, he argues, that “hurts not just publishers and writers, but readers as well.” Krugman’s book was published by W.W. Norton and Company, which, as Osnos pointed out, was not one of the five publishers targeted by the Department of Justice in its investigation of anti-trust allegations involving e-book pricing. But to evaluate where the pricing issue stood outside the legal battles, Osnos went to every major on-line retailer as well as a selection of traditional bookstores to find out exactly what they were charging for End the Depression Now, which was published in May and has, according to Norton, has some 30,000 copies in print, and has sold 25,000 as e-books. The list price for the book is $24.95, and every bricks-and-mortar bookstore that Osnos called was selling it at that price. (The book can also be ordered directly from Norton’s website, but that also comes with a shipping charge and sales tax where required.)

So what is a consumer to do? To a certain extent, the decision depends on which reading devices are being used, and with Amazon offering more and more affordable versions if its Kindles (The Wall Street Journal pointed out that “Amazon’s new products stood out for their low prices, especially compared with Apple’s popular iPads,” publisher’s fears that Amazon’s goal to train consumers to expect both the lowest possible prices for hardware as well as for the content they carry, “with the ultimate intension of driving vendors to accept less for what they sell,” may well come to be realized.

In Judge Denise Cote’s opinion approving the DOJ settlement with the five major publishers, she wrote that “It is not the place of the court to protect those bookstores and other stakeholders from the vicissitudes of a competitive market.” So for the time being, consumers, Osnos believes, can expect to see the output of publishers such as W.W. Norton to be available at a variety of prices.

“But over the longer term,” he argued, “with possibly serious consequences for the viability of publishers and booksellers, the odds favor the public’s instinct to get the best bargain. To reiterate a crucial point I have made before: Publishers will always need the revenue to support authors and the staffs that edit, produce, and market their books, and to provide a reasonable profit for their owners. If the squeeze becomes too tight, the result will be fewer books that matter — like End This Depression Now! — whether in print or digital formats.”