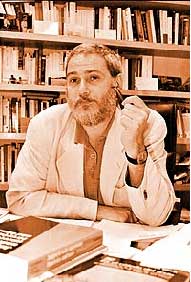 You can say one thing about Argentina’s political leadership: it’s not afraid to court controversy and alienate its colleagues in Spain. In April, Christina Fernandez’s government moved to nationalize the nation’s largest oil and gas company, YPF SA, which is majority held by a Spanish firm. Now, the past few months have drawn loud and vocal cries from the publishing industry after moves by the government have led to the sever restriction of importation of books from Spain and abroad. The issue is as cultural as it is political or economic — and highly polarizing. Some influential publishing personalities have dubbed the move “fascistic,” others see it — as the government has defended itself — as a pragmatic move to preserve and protect the country’s intellectual assets.

Katz founder and director of Katz Editores, and highly regarded in Argentine publishing circles (he was recently selected as one of the top 50 people in Spanish-language publishing) — notes that (and I’m working from my own rough translation): “Argentina produces about 12.5% ​​of the titles that are published in Spanish, which means that any restrictions to prevent the introduction of books to Argentine readers limits their access to 87.5% of titles published each year in our language — not to mention in other languages.”

He continues by explaining that the government agenda is setting up clear dichotomies and hierarchies: the prioritizing of manual labor over intellectual capital, of the local over the foreign. It is, he writes: “It is ideology that remains convinced that [Henry] Ford-like production lines are more genuine and important goods produced by education, knowledge and creativity.”

The government may be promoting its actions under the banner of promoting “cultural sovereignty” but Katz concludes any action that can view the “free circulation of books as dangerous” is simply “sad.”