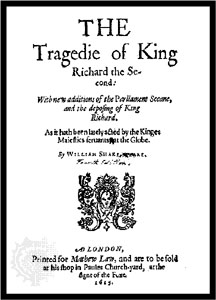 At “The Play’s The Thing,” Publishing Perspective’s year-long (or longer) examination of the complete plays of William Shakespeare, we’ve finished his lyrical tragedy, Romeo and Juliet. We just completed his lyrical comic masterpiece, A Midsummer Night’s Dream. So now it’s time to move on to his lyrical history, one of his most undervalued, interesting and poetic plays, Richard II. The story of “a bad king and an interesting metaphysical poet,” is, in the words of Harold C. Goddard, “the most minute and extended, and in many ways the most subtle piece of psychological analysis that Shakespeare had made up to this time.” The story of a king who cannot command, it is, as Harold Bloom says, “superb…always experimenting, Shakespeare composed Richard II as an extended metaphysical lyric, which ought to be impossible for a history play, but for Shakespeare everything is possible.”

We hope you’ll join the discussion.