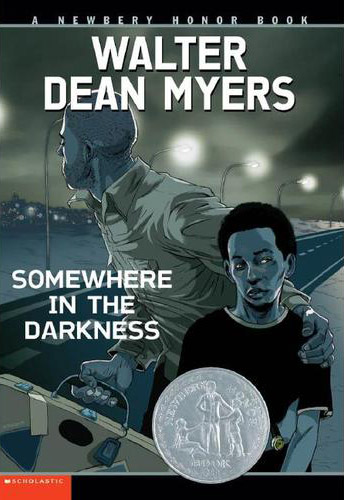 Walter Dean Myers, five-time winner of the Coretta Scott King Award, two-time recipient of Newbery Honors (for 1989’s Scorpions and 1993’s Somewhere in the Darkness) among countless other awards and citations was inaugurated as National Ambassador for Young People’s Literature by Librarian of Congress James H. Billington on January 10 in a ceremony at the Library of Congress in Washington, DC. Myers will serve in the position during the remainder of 2012 and 2013, succeeding Katherine Paterson.

The 74-year-old Myers — author of more than 100 published books including picture books, lyric poetry, fantasy, biography – is perhaps best known for realistic fiction that takes an unflinching look at the lives of America’s urban poor. It’s a life he knew all to well growing up in Harlem, which makes the platform he’s chosen for himself, “Reading Is Not Optional” all the more personal and urgent.

In an interview, Myers told the New York Times, “I was teased if I brought my books home. I would take a paper bag to the library and put the books in the bag and bring them home.  Not that I was that concerned about them teasing me – because I would hit them in a heartbeat.  But I felt a little ashamed, having books.”

And it is that feeling shared by so many urban youth that he hopes to help overcome. Myers told PW, “We all know we should eat right and we should exercise, but reading is treated as if it’s this wonderful adjunct. Reading takes you to faraway places. We’re still thinking in terms of enticing kids to read with a sports book or a book about war. We’re suggesting that they’re missing something if they don’t read but, actually, we’re condemning kids to a lesser life. If you had a sick patient, you would not entice them to take their medicine. You would tell them, ‘Take this or you’re going to die.’ We need to tell kids flat out: reading is not optional.”

Myers hopes that because of who he is and what he writes about, he will be able to speak directly to low-income minority parents. He told the NYT, “You take a black man who doesn’t have a job, but you say to him, ‘Look, you can make a difference in your child’s life, just by reading to him for 30 minutes a day.’ That’s what I’d like to do.”

The Center for the Book in the Library of Congress, the Children’s Book Council (CBC), and Every Child a Reader, the CBC foundation, are the founders and cosponsors of the National Ambassador for Young People’s Literature initiative. “Walter Dean Myers is a wonderful storyteller and authentic voice,” said Robin Adelson, executive director of the Children’s Book Council and Every Child a Reader. “His pioneering novels are hard-hitting and, at the same time, deliver a powerful sense of hope and dignity, and we believe he will do the same as the next ambassador.”