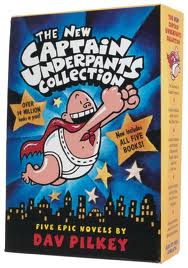 The Return of Captain Underpants! Launched in 1997, the Captain Underpants series has been a huge success with young readers: published in 19 languages, it has more than 50 million books in print in North America alone. The three most recent Captain Underpants installments each debuted at #1 on the New York Times bestseller list, and Dream Works Animation SKG acquired film rights in October.

Ellie Berger, president of Scholastic Trade, said regarding the series’ success, “Dav Pilkey was really an innovator and ahead of his time in the way he uses illustrations to enhance the story. His humor is unique and has a very wide appeal. It is so kid-friendly, but adults really get it, too. And with their mix of text, art and humor, the books engage a broad range of kids, including the most reluctant readers.”

E-book editions of two additional Pilkey titles, The Adventures of Super Diaper Baby and Super Diaper Baby 2: The Invasion of the Potty Snatchers, were released this January, and Berger expects that Scholastic will eventually publish additional Pilkey titles digitally. “We’re exploring different options to find the right way to expand the series into digital formats while keeping the great value of the printed books.”

A New Deal for Ruckus Ruckus Media Group and SeaWorld Parks & Entertainment have announced a multi-year licensing deal to create digital story books – the first such venture for SeaWorld.  A portion of the proceeds from the digital interactive books will be donated to the SeaWorld and Busch Gardens Conservation Fund, which supports wildlife research habitat protection, animal rescue and conservation education around the world.

SeaWorld joins Hasbro, Crayola, and The Wiggles as among the latest to join forces with Ruckus. In a statement, Rick Richter, CEO of the Ruckus Media Group said, “We’re honored to bring SeaWorld into the Ruckus family of mobile educational entertainment, and look forward to creating digital stories and unique experiences that capture the excitement and wonder of the sea. Our stories continue to spark children’s never-ending interest in the natural world.”

Making a Deal With the Wimpy Kid

Antarctic Press, the San Antonio based manga publisher that was sued for trademark infringement for its parody of the best-selling children’s series featuring zombies instead, was given additional time to resolve its differences with Wimpy Kid, Inc. Judge Richard Stearns of U.S. District Court in Massachusetts signed an extension order, following Antarctic’s assent in December to a restraining order that stopped the distribution of its first Zombie Kid title and delayed the publication of the second book in the series.

In its filing, Antarctic asked to have until February 13, 2012, to respond to the complaint. But like the restraining order, that too could become moot. As the filing states, “The parties are attempting to negotiate a resolution of this dispute, in which case a response to the Complaint will be unnecessary.”

A Digital Book World panel looked at the potential of children’s e-books, combining the findings of the recently released study, called “Understanding the Children’s Book Consumer in the Digital Age,” a look at the habits and trends of e-book reading in children, with a Q&A with industry experts.

Lori Benton, v-p and publisher, trade publishing at Scholastic, said that one of the most important factors for children when reading is choice, stating that kids are more confident if they can choose for themselves what they read.

Other findings included: 75% of parents in the study said that they have not yet bought an e-book, meaning that they would be unlikely to make the step and first buy an e-book for their children, but 56% said they were “likely” to buy an e-book in the near future.

Dan Farley, recently head of Macmillan’s children’s publishing group, has been named executive v-p of business development for SwoopThat LLC. The San Diego-based company has developed a proprietary search technology that allows college students to find the lowest online price for textbooks – new, used, e-books, even rental – for an entire college course.  Its technology can search course information for over 2500 schools throughout the United States.

One of the main concerns for parents regarding e-books was that reading on a device as opposed to a physical book is that it could cause focusing problems in the child as well as too much “screen time.”

Among children ages 7 to 12, 27% own their own computer, 25% own a cell phone, and 7% own a reading device. Teens have tripled their reading rate of e-books in the last year.

Diane McNaughton, v-p of marketing for HarperCollins Children’s Books, made clear that the growing interest in children for technology and the fading parental hesitancy to adopt such technology means a further dramatic shift in favor of e-books, contingent on one major factor:  the adoption of digital devices by schools. Once schools begin using e-books in the classroom, she said, “Expect the percentages to drastically change.”