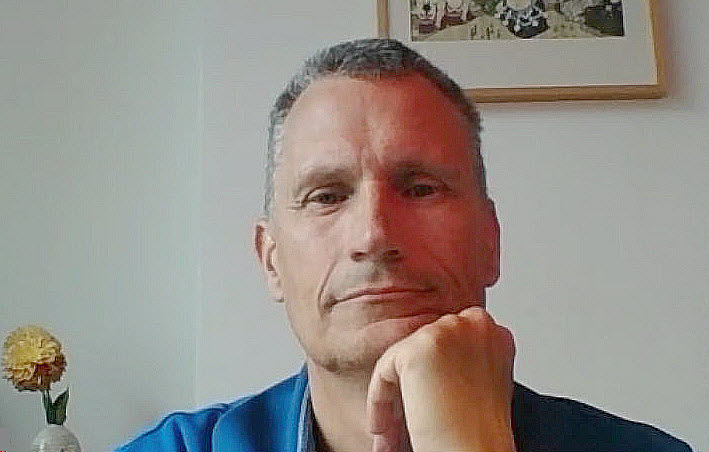 Since the COVID-19 pandemic’s onset, Michiel Kolman says, Elsevier’s workforce has found a heightened feel for its work’s importance–and an enhanced sense of belonging.

‘A Sense of Purpose’

For a man who walks to the top floors of a 23-story high-rise two days a week to his office, Michiel Kolman is calmly reflective as he reviews the effects of the last six months on one of the world’s largest academic publishers.

Senior vice-president with RELX Elsevier at its world headquarters in Amsterdam, Kolman is known to many in world publishing as a past president of the  International Publishers Association (IPA).

He’s now is the envoy of the current president, Hugo Setzer, for diversity and inclusivity in world publishing. He established Elsevier Pride in 2013 and has been ranked by the Financial Times as being among the world’s most influential LGBT executives, serving today as co-chair of the Workplace Pride Foundation.

“Our nice elevators,” he says with a laugh, “are of course coronavirus traps.” He’s biking to and from work, as well. So the “quarantine 15” weight gain experienced by many during the pandemic hasn’t been a problem for Kolman.

But needless to say, the company that produces some of the world’s leading research media and products including The Lancet, Cell Press, and Science Direct was very much on the hot seat as the coronavirus COVID-19 pandemic developed in the winter and spring.

“What we did immediately,” Kolman says, “was make all key information freely available. That went from articles to data sets, etc. Others followed suit across the STM world, and in that sense, we really contributed. My colleagues were working day and night to get it all out and freely available” in the company’s Novel Coronavirus Resource Directory, which catalogues evidence-based clinical guidance and more than 41,000 research articles.

The project of moving as fast to surface pertinent content quickly “gave us a sense of purpose,” Kolman says. Elsevier found itself coping with the workplace effects of the contagion’s arrival—as did most publishers—but its work was, and is, at the coalface of the scholarly response to the crisis.

“We were truly contributing to trying to find a solution, and that was important,” he says.

“Fauci said, ‘You want the evidence?’ Here’s the evidence.’ And he held up a Cell Press paper.”Michiel Kolman, Elsevier

“We fast-tracked a lot of information in our journals. And that’s linked to a broader discussion. In many countries, government positions were based or positioned on scientific advice, medical advice, public health advice.”

That was, at least, the expectation, of course, as various political leaders found themselves grappling with incredibly disagreeable propositions, such as the closing down of national economies and frequent international competition for needed equipment and supplies.

As we know, some governments have been far more successful than others in hewing to actual expert guidance. But to no small extent, many efforts to respond to the emergency were based, as Kolman says, “on what was published in our journals.”

A prideful moment for Kolman and his roughly 7,500 Elsevier colleagues came when Dr. Anthony Fauci, the now ubiquitous chief of the United States’ National Institute of Allergy and Infectious Diseases, was testifying before a Senate committee on Capitol Hill in Washington.

Kolman recalls: “Fauci said, ‘You want the evidence?’ Here’s the evidence.’ And he held up a Cell Press paper.” 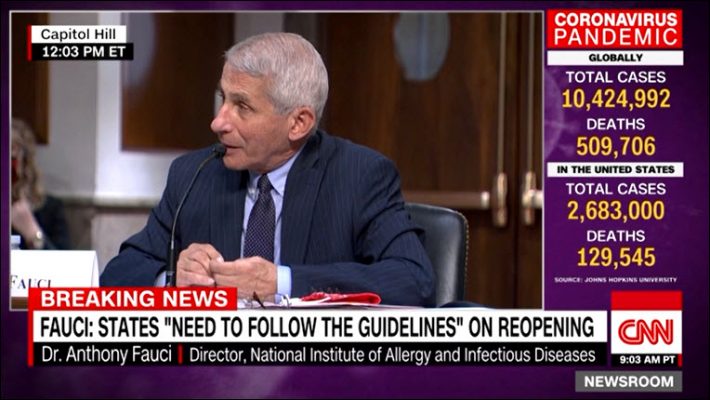 “What we also saw, however,” Kolman says, “was incredible pressure to speed things up.

“There were a couple of developments related to that. One is that the role of preprint servers became far more important,” he says, referring to those versions of scientific and scholarly papers that may precede peer review and formal publication in journals.

“Politicians and policymakers, when they present their policies, of course, will say they stand their theories based on scientific information.”Michiel Kolman, Elsevier

“Preprint is really the very early stage of an article,” he reminds us, “a manuscript.” Some of these pieces “will be heavily edited and revised,” Kolman says, “and others will bite the dust. And so there was a question of to what extent can we rely” on content at such stages of development. That’s the whole discussion of trust, right?

“Politicians and policymakers, when they present their policies, of course, will say they stand their theories based on scientific information. There were talks of some sort of ‘light peer review’ as we realized that we cannot just let everything in there. There must be some kind of quality selection.”

This, for example, is reflected today in the push-and-pull underway in Washington, where many critics complain that Donald Trump and his administration are pressuring institutions and agencies–among them the United States’ Centers for Disease Control and Prevention (CDC) and the Food and Drug Administration–to speed protocols around COVID-19 therapeutics and vaccine research. At the Washington Post, there’s a comprehensive look from Sunday (August 30) at this issue, from Laurie McGinley, Yasmeen Abutaleb, Josh Dawsey and Carolyn Y. Johnson.

“At the same time,” Kolman says, “we saw that the journals, including our own at Elsevier, were fast-tracking peer review. And so it was a time when the very strict line became a little bit blurred between peer reviews, ‘anything goes,’ preprints, and completely reliable robust information in journals. Some really interesting developments,” he says, that might only have been encountered at such scale in the extraordinary circumstances of an international pandemic. 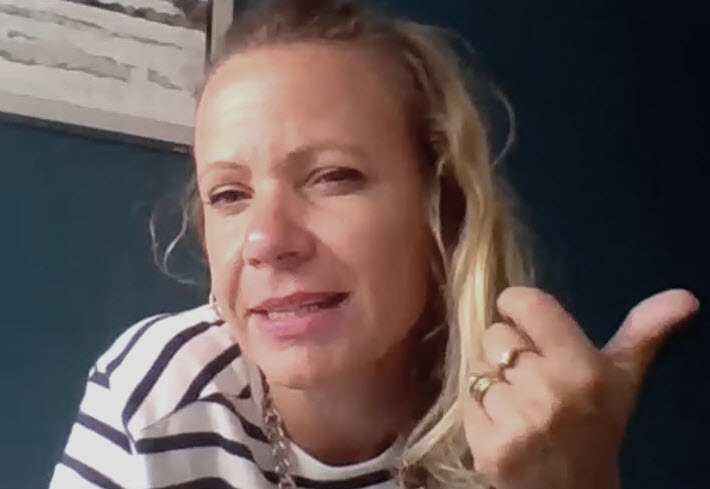 While Elsevier’s content, its availability, and the efficacy of its preparation and presentation necessarily held the most urgent levels of attention for the company, Kolman says that the workplace dynamics of the company became a focal point of their own.

“Our relatively new CEO,” he says—Kumsal Bayazit, in place since February 2019—”kept on reminding us of the importance of diversity and inclusion. It’s so important that you feel included when you’re working from home, when you’re in the midst of a health crisis, when you’re feeling the impact, when there are concerns about race and racism.”

“We track our employee engagement and employee satisfaction, and during the pandemic it has never been so high.”Michiel Kolman, Elsevier

What Bayazit was championing across the Elsevier workforce was “a sense of belonging in the organization where you work,” Kolman says. “And somehow, it really worked. We track our employee engagement and employee satisfaction, and during the pandemic it has never been so high.”

That rather remarkable outcome, he says, had to do with not making diversity and inclusion issues “a cherry on the cake” of the company’s main mission and tasks. By looking at the employee engagement element as part of the central goal structure of the company under the stress of the pandemic’s upheaval, Elsevier, he says, was able to carry that dynamic of belonging forward with the marketplace performance of the company.

Because the company is multinational, the work status of its employees—in terms of such issues as working from home or in offices—varies according to location and local regulations. In Amsterdam, for example, that trek up the stairways to the top seven floors for Kolman can only happen twice a week because of limitations on how many workers can be in the space at a time. While in China, his colleagues have gone back into their offices.

He and other members of the management team haven’t yet decided on how to handle workplace considerations yet because “the pandemic is not going away” immediately and there may be many more months ahead when, he says, “We’ll have a mixed model, where people work mostly from home but sometimes in the office” which, of course, can only be used “under safe circumstances.”

“In Amsterdam,” she says, “a lot of people work from home at least once or twice a week. So it’s not such a big change.”

“And that’s where trust,” as a management asset, Kolman says, “is so important.”

Many members of Elsevier’s workforce, for example, have company mentors, and they may be in various parts of the world, so that employees want to work with their mentors from home during hours when being at an office makes less sense.

And the perspective of the employee, he says, is of prime concern. “If you don’t feel safe coming into the office, then don’t come to the office.”

Martin says that Elsevier’s management made it clear that it was understood that the initial transition into working full time from home with childcare to handle meant that “you weren’t going to be at full capacity.” The company made a point to let employees know, “Your manager will understand. And that was a good thing,” easing some of the tension inherent in the upheaval for many employees.

What’s more, the company has offered “daily mindfulness sessions,” she says, “and yoga, boot camp,” and more, all in virtual connections. Seeing “little kids with their parents in meetings,” she says, has been helpful, letting employees become more familiar with each other’s home lives.

So as it turns out, the workplace conditions of the pandemic—despite the demands placed on a company like Elsevier during such an event—have been, Martin says and Kolman agrees, “a great equalizer.”