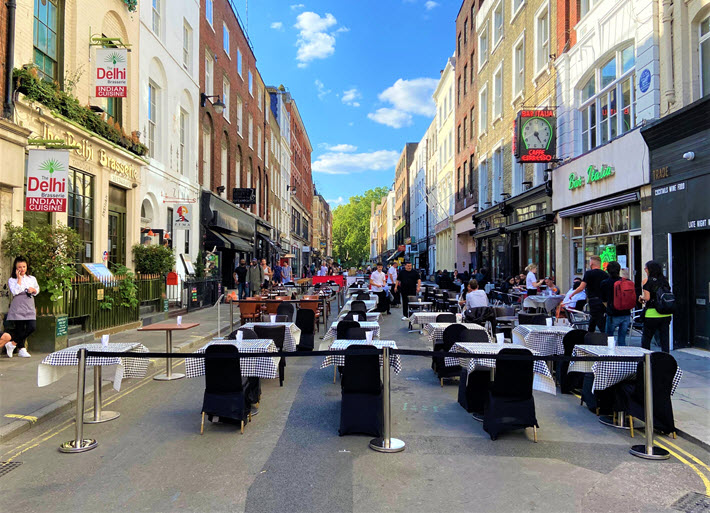 UK book exports in 2019 rose 3.3 percent over those of 2018, as revealed in today’s Publishers Association report on last year’s pre-pandemic performance.

Historic Gains Interrupted by the Coronavirus

In an unwanted irony, 2019 is being described by the United Kingdom’s Publishers Association as the best year for publishing in that market’s history—only to have to call immediately for government support in a recovery from the effects of the coronavirus COVID-19 pandemic.

“Before the coronavirus pandemic, the UK’s publishing industry was flourishing,” Lotinga says, “with 2019 being the strongest year in the history of publishing. These robust figures reflect people’s ongoing need and desire for books.

“The UK publishing industry was on course to be worth £10 billion [US$12.7 billion] by 2030 before the coronavirus, but that will only happen now if the government properly supports our recovery.

“This means ensuring there is a fair market for books, particularly support for bookshops, avoiding a no-deal Brexit and providing vital funding for schools and universities so they can buy the education resources that students need to learn remotely.

“Our 2019 Yearbook figures tell a story of pre-COVID-19 success, but they do not reflect the significant challenges that publishers have faced during this pandemic. Despite those difficulties, we know that many people have continued to look to books for solace, enlightenment and entertainment.”

In perhaps more irony, the first message on the pink pages of the 117-page report is from that government, in the person of Caroline Dinenage, the UK’s minister for digital, culture, media, and sport, who promises, “We are incredibly proud of the UK’s publishing industry.”

She adds, “The government has provided unprecedented assistance to support businesses through the pandemic and in their recovery, and we will continue to work with the publishing sector to ensure that it bounces back stronger than ever.” 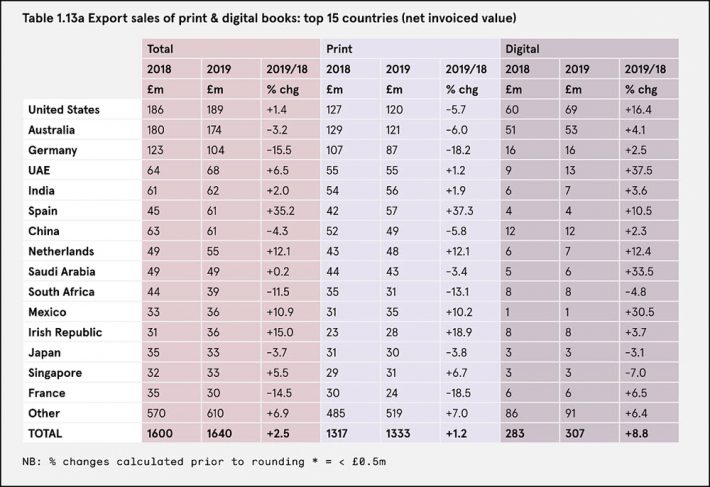 In export sales of print and digital books, the United States was the UK’s leading market, followed by Australia, Germany, the United Arab Emirates, India, and Spain. Image: Publishers Association

In her politic statement, Dinenage rightly points to UK publishing as “an export powerhouse,” putting her finger on one of the most important elements of this country’s book business going forward into its Brexitian future: “Exporting is crucial to the [UK] publishing industry,” the report clarifies, “with export sales income accounting for 59 percent of total sales income.”

This means, of course, that trade negotiations are of stark importance to the British book market, a historical reality. Its output vastly outruns its own consumers’ needs and interests and without its international ports of call, the UK industry is simply not what it has been—hence Lotinga’s direct reference to the importance of avoiding the crash landing of a no-deal Brexit.

Top-line points from the export factor:

So much quantified evidence is a useful tool in demonstrating how critically important the internationalized market is to the UK’s operation.

Its day-to-day campaigns for reading promotion and good causes; its valiant efforts to protect the bookstores of its high street; its world-leading efforts in publishing-house diversity and inclusivity; and its collective joy in a boggling plethora of awards programs—these elements hold prime focus in-country, while the foundation for much of it is in international channels.

Dinenage asserts in her message that the UK exports more physical copies of books than any other world market. Technically, that may not be something fully knowable. But her point is well taken. 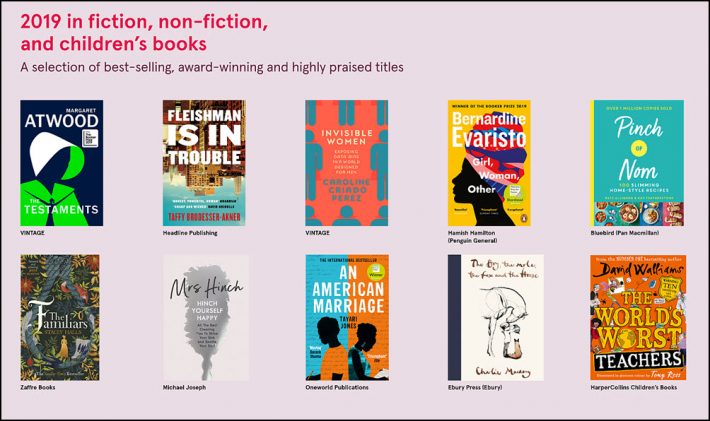 The news in 2019 was good in home sales, as well, powered across all formats mainly by nonfiction, reference, and children’s books. The invoiced value of UK publisher home sales of books rose by 3.5 percent last year to £2.1 billion (US$2.7 billion) with a 3.8-percent increase in print sales and a 2.4-percent boost for digital sales to UK consumers.

And for all the excitement about audiobook sales growth (not just in the UK but in many markets), that collective digital gain is actually slightly behind the 2015 increase of 20 percent.

“Our 2019 Yearbook figures tell a story of pre-COVID-19 success, but they do not reflect the significant challenges that publishers have faced during this pandemic.”Stephen Lotinga, Publishers Association

The ongoing energy in nonfiction, of course, is interesting in many markets, in some of them because politically related content is so relevant. Nonfiction and reference in print in the UK rose from 35 to 38 percent of value between 2015 and 2019, as children’s books—always a darling of the industry—moving forward at 1 percent per year.

Academic and professional titles accounted for a quarter of sales throughout the five-year period, with fiction showing some decline, to 14 percent and schoolbooks sliding to 8 percent.

The average invoiced price of a print sold to the UK  home market was up, rising 2.8 percent in 2019. This was driven by a 7.4-percent increase in children’s book prices, alongside increases of between 1.8 and 3.1 percent in fiction, nonfiction, reference, academic, and professional books.

Schoolbook prices fell in the UK, coming in 17.9 percent lower than in 2015. This, as even fiction and children’s prices over the five-year period rose between 1.9 and 4.2 percent. 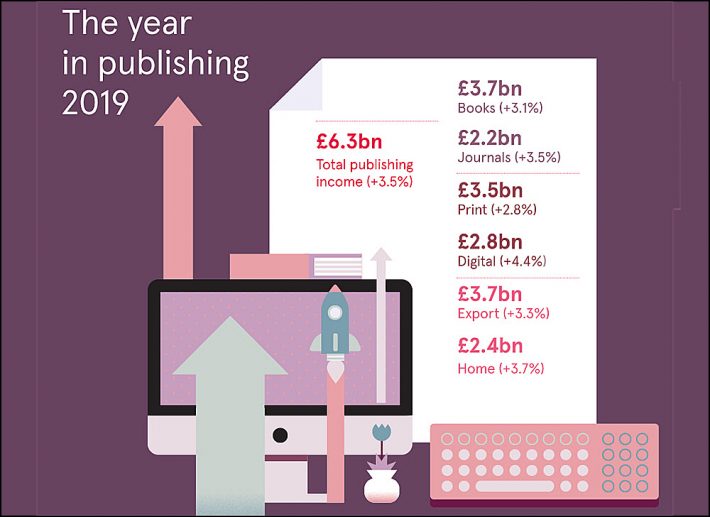 In its 8:34 a.m. ET update (1234 GMT), the Johns Hopkins Coronavirus Resource Center has the UK at ninth place in the world for caseload, with 297,389 infections. The market is third in the world for COVID-19 deaths, after the United States and Brazil, at 45,507 fatalities in a population of 67 million.

The wearing of masks in shops and supermarkets becomes mandatory in England by order of No. 10 Downing Street on Friday (July 24). A similar order has been in place for about a week in Scotland. As Ivor Bennett has reported for Sky News, demonstrators against mask mandates in the UK have argued that such an order is an override of their rights.