With the London Book Fair’s trade-show carpet still warm from the busy week’s footfall, Livre Paris 2019 has opened today, and L’Europe est à l’Honneur—Europe herself is the guest of honor.

As the UK wrestles this week with Brexit, the London Book Fair has shuttered only hours before today’s (March 15) opening of the 39th edition of the Paris book fair, Livre Paris. Running until March 18, it will be hosting the continent of Europe as its guest of honor. 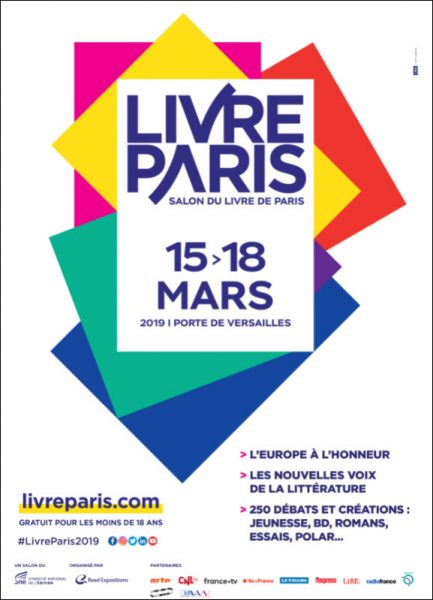 “Europe is our future, and culture is more than ever the bedrock on which to build this future,” writes Sébastien Fresneau, the head of Livre Paris, in his introduction to the guest of honor program. One-hundred European authors will be at the fair, including 23 Slovakian writers who are part of a program honoring the city of Bratislava.

Participants will examine Europe’s cultural identity—its political, economic and social factors—but will also look at issues related to the book industry such as the EU copyright directive legislation.

Fresneau works for Reed Exhibitions, which organizes the fair for the Syndicat National de l’Édition (SNE), the French publishers’ union.

He arrived in 2016 and faced a range of problems, from publishers complaining that fees were too high—in 2015 a number of Hachette group imprints began boycotting the fair—to authors demanding to be paid for their presence at the fair (they subsequently were) and a generalized dissatisfaction with the quality of the food available at the fair.

This year, 50 different countries will be present at Livre Paris, which will have 391 stands and host 3900 authors. Officials expect around 165,000 visitors.“Our main challenge is to succeed with our European project,” says Fresnau. “We are used to managing one country, but this year we need to create a project with 15 countries.”

Another challenge for Livre Paris, says Fresnau, is to involve as many exhibitors as possible in making stands more interactive, playful and inventive. The publisher Éditions Zulma, for example, will hold “literary jukebox” sessions, in which visitors will propose a piece of music and an author will recommend a book to accompany it. France’s Ministry of Overseas Territories will have a stand that will highlight literatures from the Indian Ocean, the Pacific and the Caribbean.

Fresnau says he’s intent on building on last year’s success, which focused on staged events around YA and crime literature.

“We want to continue to attract a younger public,” he says. “We’ve already increased by 10 percent the scheduled school visits compared to last year.”

The fair and the Centre National du Livre (CNL), will be handing out 20,000 Chèques Lire, vouchers for books, each with a value of about €12 (US$13.56) to schoolchildren.

“Our notion is simple,” says Vincent Monadé, president of the CNL. “When a child comes across a book, he becomes a reader. Our role is to create the conditions for this meeting.”

But Fresnau says there’s still much to accomplish to bring in younger readers. Besides holding more workshops for children and making events more playful, Fresnau is also trying to appeal to young adults: “We’re involving more young people, including students, in the programs. For example, they’ll be able to speak to authors and pitch their projects and ideas to professionals.”

‘To Enliven These Reading Communities’

Young readers will also be among topics of discussion on Monday (March 18), the last day of the fair, which is the traditional “professional day” for people in the industry. Panels will include topics such as teenagers’ favorite author-influencers; where comics for kids begin and end; and whether sci-fi is the literature of the future.

The biggest challenge for publishers, says Fresnau, is to get to know their readers better. “There’s a lot of work to be done with young readers, plus books are now competing with Netflix, because people only have so much free time. You have to respond to readers’ changing tastes with crime, or graphic novels, for example, but you have to go further, to enliven these reading communities.”

Fresnau previously worked in the music entertainment industry at EMI. “The video and music communities,” he says, “are very lively, so it’s possible, but for books today it really varies from publisher to publisher.”

Going forward, Fresnau says he’d like to improve the fair’s presence on social media, by creating communities on Instagram, for example, with year-’round content “so that it lives beyond just four days.”

And even if Victor Hugo said that reading is drinking and eating, Fresnau says he still hopes to address the complaints about the food available at the fair, by improving the diversity of restaurants, and increasing the seating areas and checkout counters.

More from Publishing Perspectives on France is here, on Livre Paris is here, on London Book Fair is here, and more on trade shows and book fairs is here.