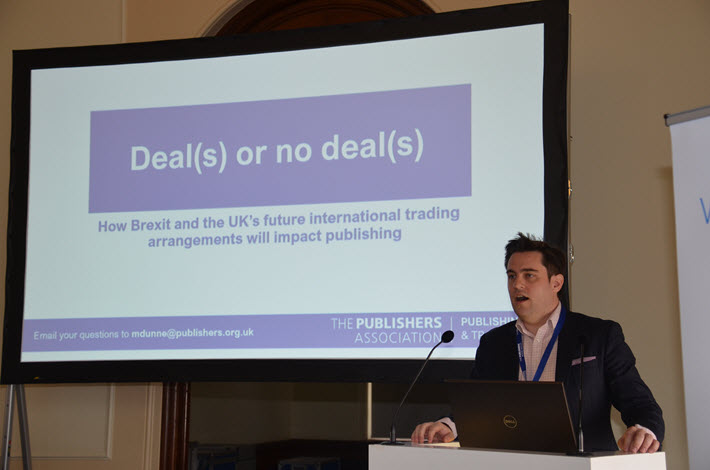 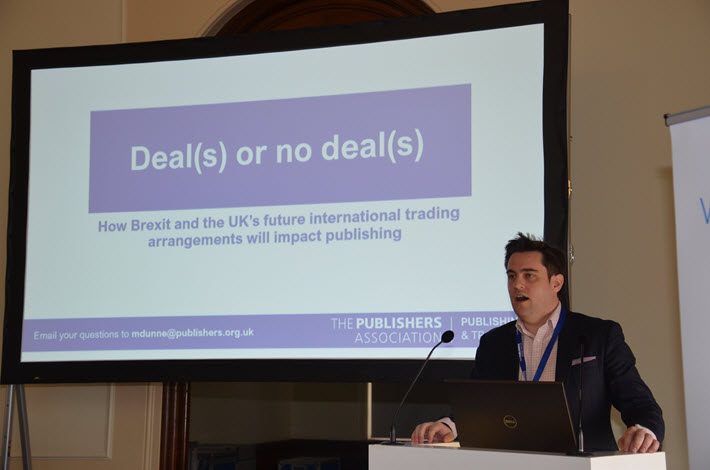 The Publishers Association’s William Bowes: ‘There are currently thousands of books on ships and no one quite knows how they’ll be inspected.’ Image: Roger Tagholm

Editor’s note. In the three days of London Book Fair 2019, the British Parliament (a) on Tuesday, rejected Theresa May’s Brexit plan for a second time; (b) on Wednesday voted against the ‘no-deal’ Brexit option; and (c) on Thursday, voted 412 to 202 to postpone the UK’s departure from the European Union, but with no clarity as to how long a delay might  follow. No surprise: Insight Seminar series events on Brexit were big draws at the fair. —Porter Anderson

‘In Both Scenarios, the Country Will Be Worse Off”

The embattled UK prime minister Theresa May needed throat lozenges as she acknowledged her latest Brexit defeat in the House of Commons on Tuesday night. And the UK publishing industry might need something stronger.

That could be one assessment of Wednesday’s (March 13) standing-room-only program organized by the Publishers Association (PA) on the subject. Deal(s) or No Deal(s): How Brexit and the UK’s Future Trading Arrangements Will Impact Publishing was introduced by the PA’s general counsel and director of policy William Bowes.

Bowes began by asking for a show of hands from those in the room who would have voted for May’s agreement.  Just four or five hands went up, including those of PA chief executive Stephen Lotinga.

Far more hands were raised for no deal, although one suspects this is because it’s seen as a route to a second referendum or even the disappearance of Brexit altogether.

Lawyer Andrew Hood—now at the European law firm Fieldfisher but a former British government legal advisor—spelled out just how bleak the post-Brexit future might be.

“There’s either a deal with a transition of some sort,” Hood said, “or there’s no deal, which will have consequences for people, logistics, contracts, liabilities.

Bowes added some color to the situation by reminding the audience, “There are currently thousands of books on ships and no one quite knows how they’ll be inspected.”

‘Most of  All, We Need Frictionless Borders’ 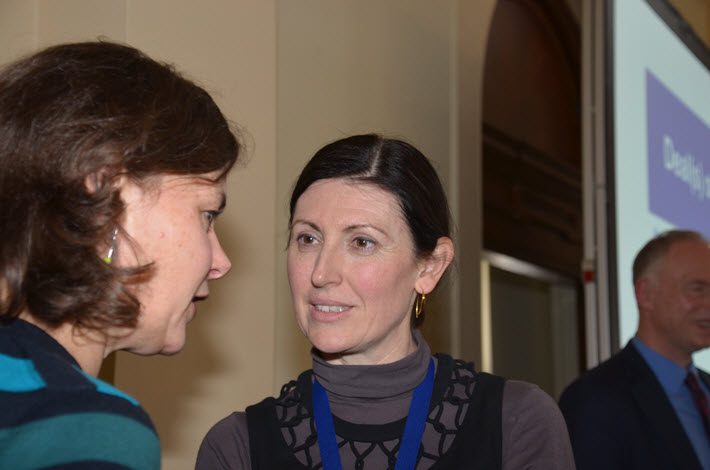 Bloomsbury’s Kathleen Farrar: ‘With the Harry Potter books it was very important that everyone had the opportunity to buy those books at the same time, and we want to maintain that ability.’ Image: Roger Tagholm

Bloomsbury sales and marketing director Kathleen Farrar said that she and the rest of the house’s senior management team, has been discussing Brexit outcomes ever since the referendum in 2016.

“Our customers know us and they want to know that we can continue to supply them as we have been doing.”Kathleen Farrar

“We’re concerned about logistics,” Farrar said, “about speed to market which is very important for us. We’re looking at paper supply and most important of all, we need frictionless borders.

“With the Harry Potter books it was very important that everyone had the opportunity to buy those books at the same time, and we want to maintain that ability. Our customers know us and they want to know that we can continue to supply them as we have been doing.”

“The reaction of most our international customers,” Phillips told the seminar, “is ‘Why? Why have you done this?’

“My concern is that we’ve been lucky.  Ninety percent of our revenue is outside the UK and 60 percent of our people are outside. Our customers have stayed with us, but patience can start to wear thin.  It’s difficult to build on business relationships unless you have certainty.”

“The reaction of most our international customers is ‘Why? Why have you done this?’”Peter Phillips

Phillips outlined the importance of UK publishing to the overall economy and said that it was the PA’s job to convince the government of that importance.

To that end, the Publishers Association is asking the government to consider including a new publishing chapter in future trade agreements with emphases on five areas:

These points will “make sure that the value and values of UK publishing continue to be exported to every corner of the globe,” Phillips said. 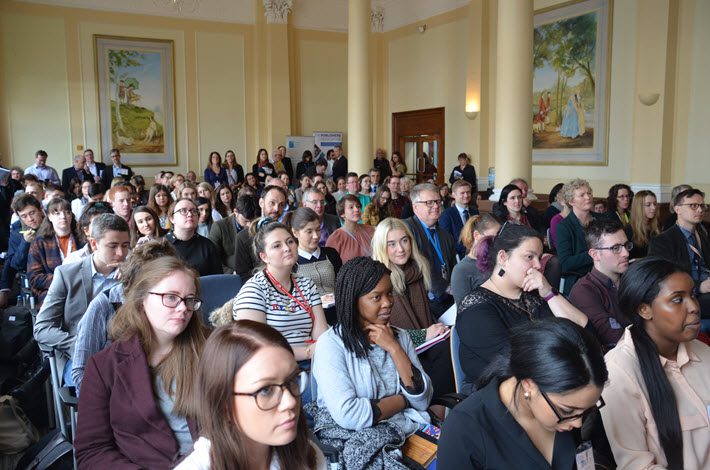 At the Publishers Association’s Brexit-focused seminar at London Book FaIr 2019. A seminar attendee from Norway–which of course, stands outside of the EU–wanted to know if the panel could think of any positives in Brexit. Image: Roger Tagholm

Robert Specterman-Green, director of media and creative industries at the Department for Digital, Culture, Media and Sport, praised the PA and the whole publishing sector “for the work you’ve done in preparing” for Brexit, and he stressed that the government was doing its bit to support the “soft power’” of the creative industries by increasing the number of “‘IP attachés’ in places like China, Singapore, India and Switzerland.”

“I do think things will take a dip before they get back to normal again.”Andrew Hood

Phillips pointed out, “We’ve had several decades of the world becoming more interconnected.  What happened in 2016 meant that the tide went in another direction.  Cambridge University Press is a very global business, and the changes in politics, not just in the UK but elsewhere, affect how we take things forward”.

A seminar attendee from Norway–which of course, stands outside of the EU–wanted to know if the panel could think of any positives in Brexit.

Hood noted that some existing trade agreements are 30 years old, “drawn up before digital had arrived. There are opportunities in bringing those agreements up to date, but I do think things will take a dip before they get back to normal again.”

But of course, what that “normal” might be in these unsettling pre-Brexit days, no one quite knows.

More from Publishing Perspectives on the London Book Fair is here, and on Brexit is here.