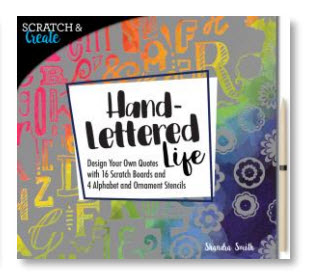 Instead of coloring-in, adults—Quarto’s team hopes—will want to scratch-off. The company has eight titles in the pipeline for this year.

Four ‘Scratch & Create’ titles, two in postcards and two in ‘creative lettering,’ are to be released by Quarto in August.

Just when you thought that adults might be getting past the stress said to make them need coloring books, the Quarto Group has announced a follow-up: on Tuesday (March 14), as London Book Fair opens, Quarto is talking up a series of “Scratch & Create” titles for release in August and December.

No longer requiring users to color-in the illustrations, Scratch & Create books are something like contest entries in which a code is revealed when a layer of coating is scratched off: the color is already there.

“By using a special stylus, you can scratch away the coating, uncovering beautiful, full-color finished artworks or you can create your own designs–from botanical illustrations to inspiring quotes crafted from the hand lettering stencils included.”

The pages of these products are perforated so that they can be removed and “displayed, given as gifts, or in the case of postcard books, also sent through the mail,” the company’s material says.

Four ‘Scratch & Create’ titles, two on ‘drawing practice’ and two in ‘creative learning,’ are to be released by Quarto in December.

In a prepared statement, Quarto CCO David Breuer is quoted, saying, “More and more adults are looking for creative activities that can help them unwind and relax.

“We believe people will enjoy these innovative products that offer new ways of stimulating the mind and exercising new skills.”

Those “new skills” apparently being scratching skills, Quarto is following up on what it cites as more than 2 million coloring books sold worldwide. Its new Scratch & Create series is offered as a way to “unwind your mind and discover a new course of relaxation and creativity.”

Two of the coming titles in August—Wild Garden with artwork by Helen Dardik and Enchanted Forest with artwork by Kailey Whitman—are to be postcard books. The December releases are to include “creative learning” titles Amazing Women and Endangered Animals with artwork by Anne Bentley.

“Scratchable ink” books are also coming from Quarto for children, according to media materials, under the Wide Eyed Editions imprint. A series called EtchArt is to release its first two titles in September.