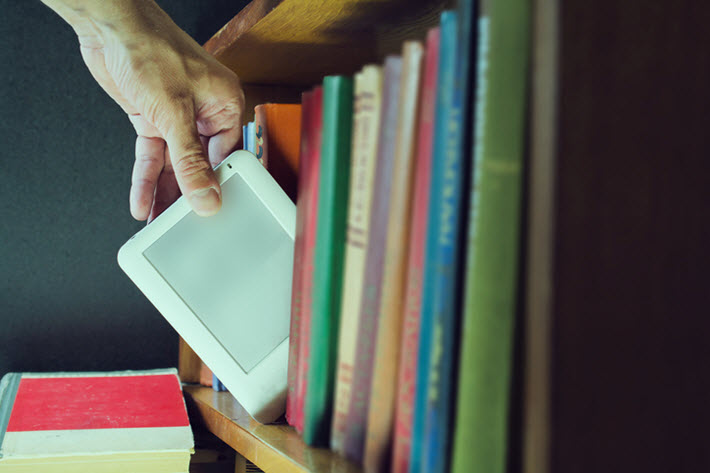 Penguin Random House ‘holds an effective veto on the success of ebook subscription services,” says Peter Hudson. His Canadian startup Shelfie has the data behind the observation. How Many Publishers Are on Your Shelf?

Another compromise of a digital reading subscription service has occurred, one that flew under most folks’ radar this week.

As reported by Calvin Reid at Publishers Weekly on Wednesday (January 11), the ebook subscription service Scribd has “quietly ended subscription access to comics and graphics novels…Scribd appears to have ended the comics service sometime in December 2016.”

As Publishing Perspectives reported, comics had been added to Scribd’s contents in 2015, with 10,000 titles. But within six months, by July 2015, Scribd would be cutting back on its romance and erotica titles because the famously voracious readers of the genre were making the subscription model financially untenable.

Scribd’s confirmation to Reid talks of light usage of comics and graphic novels content by users and goes on to say, “We will be focusing our efforts on enhancing the experience surrounding our other great content types including books, audiobooks, magazines, and documents.”

But Reid noted an irony here, in that Scribd “initially called the launch of the comics subscription category ‘explosive for us, with the biggest response and fastest adoption we’ve ever seen.'”

Looking to the rise of other services as the main key to what happened to Scribd’s shuttered carriage of comics: “Currently subscription access to digital comics,” he writes, “is offered via Comixology Unlimited, Marvel Unlimited, Archie Unlimited, and Comic Blitz, a smaller subscription service that launched in October 2015.”

Perhaps the most telling line in Reid’s report, however, is that Scribd’s comics and graphic-novel content included “none from the big two American comics publishers, Marvel and DC.”

This aligns with the thinking of the co-founding CEO of Vancouver-based Shelfie (formerly known as BitLit). Peter Hudson told Publishing Perspectives that the data he and his team at Shelfie are collecting have convinced him that, “Mainstream ebook subscription services will not succeed until substantially all trade publishers are on board.”

Hudson has several examples in recent media reports of a kind of breakthrough success for streaming music subscriptions.

At The Guardian, Hannah Ellis-Petersen wrote, “Profits from music streaming, first championed by Spotify and now offered by Apple and Amazon, have given some labels their largest surge in revenue in more than a decade.”

And at Pitchfork, Matthew Strauss sees the turning of a major corner: “According to a new year-end report released by Nielsen,” he wrote, “over the course of 2016, streaming became the primary mode of music consumption in the US. Overall on-demand audio streams surpassed 251 billion in 2016, a 76-percent increase that accounts for 38 percent of the entire music consumption market.”

“The trend is blindingly clear: If you have 2,000 books in your library, odds are those titles are published by over 350 different houses.”Peter Hudson

What it means, Hudson said, is that “the only successes we’ve seen so far in ebook subscription have been in highly vertical markets such as Safari Books Online.” Safari is one of the more than 2,100 publishers Hudson’s Shelfie works with in its print-and-ebook bundling service. In a case like Safari, he said, “a small group of publishers can satisfy the content needs of a niche community”—the vertical.

One of the most interesting elements of Shelfie’s service is that it uses photos that readers take of their physical bookshelves to determine which corresponding ebook editions it has to offer them.

As the service analyzes the titles on a shelf, it’s collecting aggregated data about which publishers’ titles are there.

“At Shelfie, we love our data,” Hudson said, “so at the risk of over-proving the obvious, here’s a graph that charts library size (x-axis) vs. the number of publishers represented (y-axis). “The trend is blindingly clear: If you have 2,000 books in your library, odds are those titles are published by over 350 different houses.”

And Hudson is ready with a hypothetical model.

“Let’s assume that to make an ebook subscription service appealing to readers, the service would have to offer at least 75 percent of what readers want. This is an extremely high bar in terms of signing up publishers, but from a reader’s perspective it still means that one out of every four books they want to read isn’t available on the service.

“It’s worth noting that music subscription services like Spotify and Apple Music have well over 90 percent of music available under their subscription models. But as a thought experiment, let’s see what it would take to get to 75-percent ebook subscription availability.

“The Big Five represent about 55 percent of all books Shelfie has indexed on shelves. Penguin Random House alone represents 22 percent.

“As such, PRH holds an effective content veto on the success of ebook subscriptions. To hit the 75-percent target without PRH would require full-catalog deals with all four of the other Big Five houses, plus full-catalog deals with every one of the next 2,000 largest publishers. If any of the other Big Five publishers don’t make their full list available, it’s numerically impossible to hit 75-percent content availability.

“Put simply: ebook subscription services will fail until either Penguin Random House or everybody else makes their content available.” “The second criterion for a subscription service to be successful,” Hudson said, “is for the platform to be able to license content under terms that allow it to survive financially.

“Under these terms,” he said, “the platforms need to hope that their customers read fewer books than their monthly subscription fee will cover. This model breaks the alignment of incentives. The platform is financially motivated to have its users read fewer books or read titles for which it pays lower royalties, such as public domain or self-published titles.

“The ebook subscription model,” Hudson said, “differs substantially from the music subscription model. There, subscription fees are pooled and the pool is split 30-70 between Spotify and rights holders, with individual rights holders paid on a per-minutes-listened basis. Amazon in Kindle Unlimited has adopted this model for its self published authors” in its pages-read calculations for payments from a pool the value of which is determined by the retailer at the end of each sales month.

Hudson’s bottom line, based on his Shelfie team’s observations, finally rests on the startup-chief’s insight after surviving with his own company for three years: “Without a sustainable financial model,” Peter Hudson said, “ebook subscription services will fail. Oyster books folded after raising nearly $17 million in venture capital. Scribd is still operating, but raised nearly $50 million in funding.”