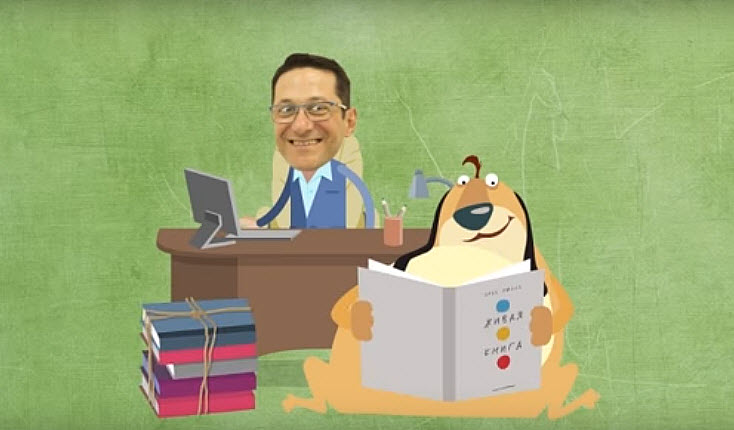 With book production down 40 percent in Russia, the country’s publishers are looking to favorable book pricing as a source of revenue growth in 2017. Seen here in a promotional video for his publishing house, Clever, Russia’s Alexander Alperovich says that children’s books grew, as a sector, in Russia by 11.5 percent in 2016. Image: Clever Publishing

Some Western markets such as that of the United States have seen downward pressure on book prices for years. By contrast, in Russia, the industry’s market growth is credited primarily to rising book prices rather than greater unit sales. And while demand in scientific literature seems to be rising in the new year, fiction’s popularity may be waning.—Porter Anderson

The book market is gradually recovering from the financial crisis in Russia, blamed on fiscal uncertainty and Western sanctions. In 2016, the book market grew by 8 percent in value terms, as compared to 2015.

The 2016 showing is the biggest growth for the last seven years, and analysts’ predictions indicate that growth will continue this year.

In the meantime, the growth of the market is credited primarily to a rise in the prices of books, rather than their unit sales.

According to analysts with the Association of Russian Publishers, a decline in demand for fiction remains one of the major trends of the Russian book market. On the contrary, an interest in scientific literature is steadily growing.

Sergey Dmitriev, a member of the board of the Association of Russian Publishers, told Publishing Perspectives, “Currently about 75 percent of the book market of Russia is accounted for by educational and study literature. Of that, about 45 percent is made up of books for secondary schools and higher educational institutions.

“Children’s literature takes some 22 percent of the market.

“The current market trends mean that the main focus of books in Russia has shifted from entertaining to education of the local population.”

“Children’s books form a platform for experiments, discussions, new and interesting topics. The development of this direction can be associated with big profits for domestic publishers.”Alexander Alperovich

The decline in the number of new books could be considered another trend in the Russian book market. Since 2008, new-title output has declined by more than 50 percent, and reprinting is greatly favored over a production of new content. Publishers have been able to lower their royalty costs by cutting back on their efforts to find new authors and titles.

Overall, in the last six years, new title production in Russia has fallen by about 40 percent. A decline in market penetration has been observed even in the cases of bestselling writers. Crime novelists seem to have been particularly affected, among them Daria Dontsova, Tatyana Ustinova, Tatiana Polyakova, and Natalia Alexandrova.

Buyers are the most concerned about the corresponding rise in book prices. The cost of publishing books has grown by about 15 percent in the last year. Among key reasons for this are a rise in paper prices and printing services, something prompting new interest in ebooks.

Children’s books reportedly are among the fastest-growing segments in the Russian market. According to Alexander Alperovich, general director of the publishing house Clever, in 2016 the segment of children’s books grew by 11.5 percent.

Alperovich said, “The children’s [category] has always been one of the most promising segments of book markets in Western countries.

“Children’s books form a platform for experiments, discussions, new and interesting topics. The development of this direction can be associated with big profits for domestic publishers, which in recent years have started to pay more attention to it.”

Because the government has decided to lift certain trading fees for book retailers, 2017 may see an easing of prices.

According to state plans, this could contribute to more growth of the market in the next decade, particularly if the government follows through with plans for additional subsidies for domestic book publishers and retailers.

Sergey Karlov, who heads up small and medium enterprises in the Ministry of Economic Development, told Publishing Perspectives, “The Russian government has decided to equate bookselling organizations with companies engaged in social entrepreneurship. This makes them eligible for subsidies, currently  implemented by the government and expected to reach a total of some 1.5 million rubles (US$24,900).”