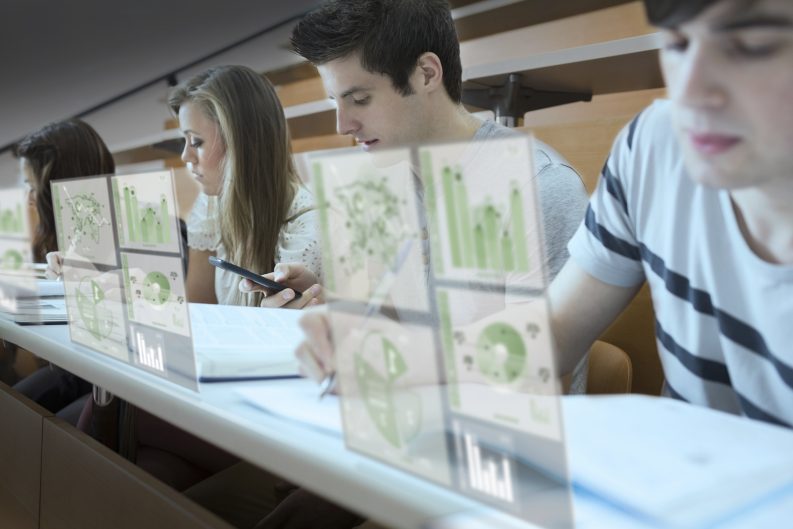 With investments from China’s Qtone and Oxford University Press, ed-tech accelerator Emerge Education is engaging with ‘the old school together with the new school.’ California-based Outsell estimates that in 2015, the global worth of the ed-tech sector rose to US2.98 billion. You glimpse the level of competitive churn in the field when you learn that Jan Matern’s Emerge Education—a UK-based international ed-tech startup accelerator—is pushing through six or eight startups on three-month programs. As we find out, these aren’t even beginner startups: they’re being chosen once they already have a round of funding, ‘as much as £250,000 before the come to the program.’ — Porter Anderson

‘A Humongous Market Yet To Be Digitized’

It’s only early September and Jan Matern already has had the kind of year that most founders dream of—particularly in the ed-tech field, which Outsell estimates had a global worth of some US$2.98 billion in 2015.

Publishing Perspectives has spoken with Emerge Education’s chief, with Emerge client Edurio, and with OUP about its investment.

In the context of that field, Emerge Education runs a three-month London-based accelerator program for startups. Six cohorts of six to eight companies have passed through the accelerator since it opened in 2014. Applications are now open to join its seventh program, beginning in January.

Emerge’s startup-alumni include such software-as-a-service startups as Bibblio from the UK, a recommendation platform for learning content. And there are startups that offer education-as-entertainment for children and parents, such as Poland’s Primo, which sells itself as the coding toy for girls and boys aged 3 and up. There also are online training companies such as Crehana from Peru, which runs short online courses for creative workers in South America.

We begin our conversation by asking about the rationale behind the company’s development.

Publishing Perspectives: Give us the background on Emerge Education. Jan Matern: We created it in 2013 in order to build what we hope will be the leading venture capitalist and investment firm for ed-tech companies in Europe. Our strategy is simple–to start by building an accelerator and then to continue investing in companies at ever later stages of development, up to when they are fully mature.

The opportunity is quite simply that education is a humongous market that’s yet to be digitized. The companies we take on will have the opportunity to make a huge social impact around the world and at the same time make fantastic commercial returns.

We’ve built a community around Emerge which forms our DNA and makes us unique. The companies we back can access this community for help with potential customers, distribution partners, and in accessing third-party capital beyond what we invest ourselves. We’ve also built a team that supports our founders so that after our intensive acceleration program, they can access this community.

PP: Can you tell us about the companies you select?

For us, the advantage is greater evidence of competence. We’ve also become better as investors. Our reputation has become better, and as a result the companies we get applying to us are further advanced.

PP: You were happy for the Oxford University Press to buy a 5-percent stake in Emerge?

JM: We have had long-standing partnerships with OUP–the core of which is a shared mission to improve educational outcomes worldwide. We have enjoyed working them and we think we are really aligned with them in terms of words and actions. We want to continue that relationship and the capital allows us to do more of what we’re doing already.

PP: What was the reasoning behind Qtone’s decision to buy its stake?

“We’re not excited about Brexit, but we’re not worried. Irrespective of our position in the EU, the UK is a world leader in education.”Jan Matern

JM: These guys from China are from an ed-tech company. They only IPO’d a few years ago so they’re not that old, but they have already displayed an amazing rate of growth and customer penetration. So it clearly makes sense to have Qtone on board, as they have the DNA of a startup that has already been successful in a really competitive and vast market. The fact that they’re from China is cool, as it’s an important market for our startups–and with OUP on board as well, it is like the old school together with the new school.

PP: Is this a hint that you’re trying to expand into Asia?

JM: We’re really focused on Europe right now. We want to be known as the leading investor in ed-tech in Europe…Who knows what will happen after that, but that’s what we’re focused on.

PP: Isn’t Brexit a problem for you?

JM: We’re not excited about Brexit, but we’re not worried. Irrespective of our position in the EU, the UK is a world leader in education. It has world-leading publishers, successful ed-tech alumni, and the tech ecosystem.

Edurio is a Latvian startup that has just received £1.5 million (US$1.99 million) from the European Union’s research and innovation grant program Horizon 2020. Edurio produces a digital survey tool to help schools—the UK’s Eton among them—manage feedback from parents, teachers, and students.

PP: In what ways is Edurio’s survey service different from the online survey company Survey Monkey? Ernest Jenavs: For starters there’s a lot of research on how to set educational questionnaires–as to what works and doesn’t work. Because Edurio is written specifically for schools, it’s a lot easier [for users] to compare results for surveys, filter different classes and subjects, and see the development over time.

PP: So how did you get involved with Emerge?

EJ: We incorporated in 2014 and applied early 2015. We’d taken part in a small Nordic accelerator in Finland beforehand, but as we had already spent some time in the UK, we knew it was one of the leading countries in education, so naturally it was the place to build something meaningful.

PP: How has that benefited you?

EJ: We’ve been connected with organizations like OUP, which we’re collaborating with right now. We’re running a pilot at Eton College, and the University of London’s Institute of Education is now a research partner with us.

The mentors we’ve been connected with—Dan Sandhu of Digital Assess and James Weatherill of Arbor Education—spent a few hours a week with us when we were on the program and then afterwards as well. They advised us about property, building use cases with schools, and how to build a pipeline.

PP: What about the OUP?

EJ: The OUP conversation started a good while back–last year. What they’re particularly interested in is learning more about the teachers they give professional development to, a skills gap approach, so they can tailor their courses to their exact needs. As we build the prototype, they continue the discussion with us.

PP: In working with older companies, how do you interact with their cultures?

EJ: With OUP and Eton, we’ve been surprised at how much of a culture of innovation you can build within a rich heritage. We’re interested in working with publishers because often they’ll have all the experience we need of the local context. They’ll often have the longest history of working in school system. So we can offer them our tech experience and our experience of how to build something that doesn’t look like it was built in the ’80s.

The OUP has been very open to discussing ideas and entering conversations with us without knowing what the outcomes are going to be. This, for us, differentiates the publishers that are ready to innovate and those that are not.

Publishing Perspectives: Why invest in Emerge? Christopher Bromley, group strategy and development director: We’ve worked with them for a couple of years on an an informal level. This April we took to the decision to invest. It is a minority stake, 5 percent. We have voting rights in terms of the companies that get taken on to their program.

Now, a few months in, we have put a lot of emphasis on assessing its success on softer components rather than hard financial criteria: boosting innovation inside the company and how it will improve learning outcomes. What commercial opportunities come out of it is certainly part of it.

It’s also about how we position ourselves as a digital company. If you think about OUP, you’ll often think about the pillars at the front of the building. That’s great and we have a long and illustrious history. However, increasingly we want to be seen moving and shaking around digital. This stake gives us a managed way of interacting with startups at a group level as an alternative model to managing the relationship ourselves, such as Joseph Noble is doing in English language teaching.

We do change the discussion, as we are the only content people at the interviews for the program. People come with great ideas and say they have great content. And we ask about that content–and it might not be.

PP: Do they see you as interlopers coming from beyond the Silicon Roundabout?

CB: No, I haven’t heard anything but positives. Are traditional publishers slower? Absolutely. Well, it’s never a good idea to benchmark yourself against startups who by definition have to be fast because they are burning through the cash…What I hear is that increasingly OUP is being seen as more responsive and open. It’s not spin. It’s really genuine.

PP: Have you acquired any of the startups yet?

CB: We’ve had a couple come up in the last few months that I’d say if we’d had feet under the table a bit more then, we would have probably invested in. However, the speed at which they came up and the speed at which we needed to make a decision meant that it was just not going to happen at this point.

If this was to happen again next year, then it might be quite different. A lot of this comes down to the types of companies coming through Emerge, and as they’ve moved up the food chain, they’re looking at more established seeds, which is better for us. It was £15,000 for a 5–8-percent stake and now its £40–50,000. They come in and say, “This is my third startup,” and you think, “What have I been doing with my life”!