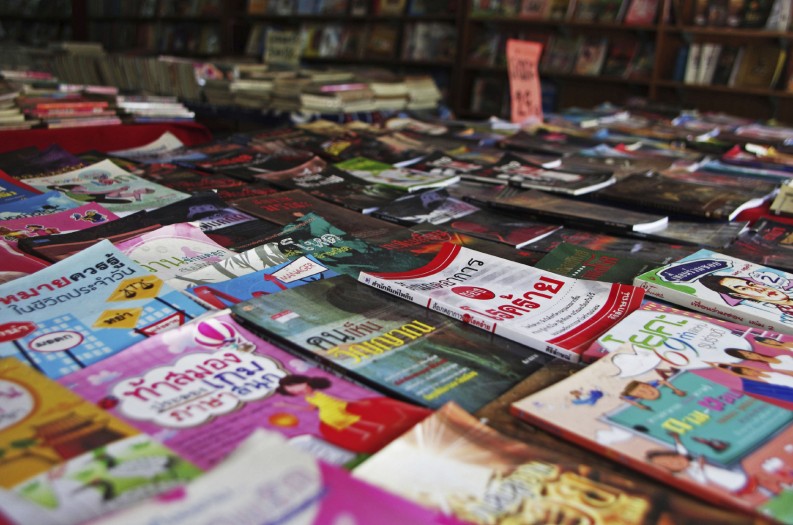 In a region with undependable publishing and distribution support, self-publishing is not unusual, says Thailand’s Trasvin Jittidecharak ahead of London Book Fair. With the International Publishers Association (IPA) having just held its 31st Congress at London Book Fair on Sunday (#IPCongress16, April 10), we asked Christopher Kenneally of Copyright Clearance Center if he might feature IPA Executive Committee member Trasvin Jittidecharak in one of his Beyond the Book podcast series conversations. Kenneally was kind enough to do this, interviewing Jittidecharak while she was at Digital Book World (DBW) in New York in March on a DBW Fellowship, and we’re glad to be able to bring you Kenneally’s writeup of the discussion. Kenneally’s Beyond the Book podcast edition of the interview is here. — Porter Anderson

In Thailand, according to the latest available figures for the first quarter of 2014, mobile telephone subscriptions outnumber landlines by more than 15 to one. “Mobile penetration” – the ratio of phones to population — stood then at 144 percent while the US was almost half that figure for the same period. Among 18- to 24-year-olds, daily Internet access is now nearly a universal habit, and Thais make up the third largest population of Facebook users in the world.

A more digital nation is difficult to find.

Yet when it comes to digital publishing in the national language, Thailand confronts a challenge over 1,000 years old: Thai has a unique written script, with 44 consonant letters and 15 vowel symbols. Unlike for languages that have adopted the Roman alphabet, the move from print to digital can be daunting.

“For Thailand, because we have our own alphabet, it’s very complicated,” says Trasvin Jittidecharak, founder of Silkworm Books, based in her hometown of Chiang Mai, northern Thailand. “For Vietnamese or Bahasa Indonesia and Bahasa Malay that use the Roman alphabet, to transform into digital books, it’s easier.

“This [difficulty] also applies for the Myanmar (Burmese) language, Cambodian, and Laotian,” she says.

“E-commerce has started to spring up across Southeast Asia. But because of the banking system, transferring money and [making online] transactions are still not convenient,” she says. “There is a lot of room to grow.”

Self-Publishing As a Matter of Course

Around the world, and especially in developing economies, the explosion of smartphone technology has led to the rise of self-publishing as a do-it-yourself distribution channel for self-expression and information. Jittidecharak currently sits on the executive committee of the International Publishers Association (IPA), where her experience adds an important measure of perspective.

“At the previous IPA Congress in Bangkok,” she says, “we were debating whether self-publishing should be an issue, and I said that this will be of interest to the Thai audience, because we have been doing it for, I don’t know, since I was born half a century ago.”

“In the States and in the UK, self-publishing has become significant in the past five years. But in our part of the world, because the publishing system and the distribution system [have not always been] that strong, people self-publish all the time, and there’s nothing wrong with that,” she says.

Since 1987, Silkworm’s English-language books on Southeast Asian culture and history have earned an audience worldwide. Through an agreement with the University of Washington Press, Jittidecharak distributes her books in North America and the UK. In 2005, with funding from the Rockefeller Foundation, she founded Mekong Press, a network of publishers including in Vietnam, Cambodia and Laos.

Trasvin Jittidecharak began learning the book trade from a very young age when her parents founded the Suriwong Book Center, the first bookstore in Thailand outside of Bangkok.

“Everything was transported by train,” she recalls. “My father has imported books since the ’60s, so I grew up with color comics coming from UK and the US. At the time, we didn’t have television, so that was cool. Later on, the highway was built and it was faster with delivery trucks.”

Piracy, whether of print or digital materials, is a vexing problem for publishers everywhere. And although she is a victim herself, Jittidecharak admits she understands the dilemma.

“Piracy is still very embarrassing, but it’s not that they can totally avoid the temptations,” she says. “We will try to explain that [piracy] will hurt us in the long run, that the Thai people are the ones being violated, and we should protect ourselves. We also point it out to our neighbors that one day all their [publishing] talent will pop up, too, and [piracy] will hurt them as much as they have been hurting us.”

Digital reading is undeniably the future direction for publishing in Thailand and across Southeast Asia. What soft-spoken Trasvin Jittidecharak says worries her, though, is the danger of loving reading too much.

“In Yangon (the largest city in Myanmar), I saw one young woman in her sarong, the Burmese traditional clothing, riding on a rickshaw, reading her smartphone in the broad sunlight,” Jittidecharak recalled. “I was worried about her eyesight and her entire generation’s eyesight. If everyone keeps reading on smartphones in the broad daylight, they might go blind.”

Christopher Kenneally is host and producer of the weekly podcast series, Beyond the Book, from Copyright Clearance Center, where he is Director, Business Development. You can follow Beyond the Book on Twitter and Facebook.

Once again, you can hear his podcast with Travsin Jittidecharak here.