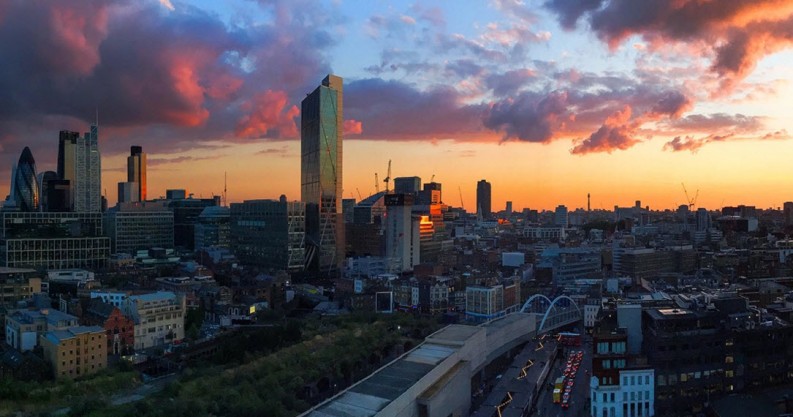 ‘How do you remain entrepreneurial when you have a business that has lasted for 90 years and you don’t want it flushed down the toilet?’ Toby Faber on perseverance in independent publishing. Image: Detail from Skies of Shoreditch, London, September 1st, 2015, by Emmanuel Nataf. Used by permission of the photographer.

This morning in the UK (March 3), Toby Faber speaks to the Independent Publishers Guild’s Annual Spring Conference in Enstone, Oxfordshire, on “Staying the Course” in the books business. We asked Mark Piesing to chat with Faber ahead of the session about what’s behind the kind of longevity of an independent like Faber & Faber? “It’s not luck really,” Faber tells us. “It’s down to flair and talent and the ability to institutionalize them.”—Porter Anderson

Toby Faber is an English lecturer, author of Stradivari’s Genius and Fabergé’s Eggs, former managing director of the publisher that bears his family name and chairman of Faber Music. And he gets right to the presumption on the part of many that luck is at work in staying the course: “When you look at the history of any publisher like Faber then it would appear that a great deal of what happens will be down to luck—good luck and bad luck. Except that it’s not luck really, it’s down to flair and talent and the ability to institutionalize them.

“While it appears that the longevity of Faber comes down to individually successful books, it is easy to miss the challenges in acquiring the books in the first place.

“Although the company is named after my grandfather, the acquisitions weren’t his. They were made by the people he hired. His skill was in recruitment. This is a more important skill for longevity than picking winners.”

Faber & Faber Limited, better known simply as Faber, is an independent family-owned publishing house based in London. It was founded by Toby Faber’s grandfather Geoffrey Faber in 1929, although its roots can be traced back further. From Siegfried Sassoon to Samuel Beckett, Seamus Heaney, Kazuo Ishiguro and so many more, the distinctive double-F logo has graced books by many of the best known and most esteemed authors in the English language. The house can count as many as a dozen Nobel laureates on its roster.

“Great poets want to be published by someone who publishes great poets. Identifying exactly what makes your company special and making sure that you protect it is a very important element.”Toby Faber

Faber can even claim the poet T.S. Eliot as a former editor, one who famously rejected George Orwell’s Animal Farm. Eliot is said to have had a decisive influence on the direction of the company, influence that persisted after his death, when Andrew Lloyd Webber based the musical Cats on Eliot’s Old Possum’s Book of Practical Cats.

While Faber typically declines comment on the actual amount of their earnings from Cats, it estimates reported by The Telegraph are that at the height of its popularity, the Cameron Mackintosh productions of Cats were earning Faber as agents of the estate up to £1 million per year in royalties. Such revenue helped sustain the publisher at a time when independent houses were going under or being taken over.

“A successful musical can make huge amounts of money,” says Faber. “So the percentage of a percentage that Faber received for licensing the lyrics for Cats was a significant enough sum to free the company from many of the worries that had dogged it in the 1970s and make some really interesting publishing decisions.”

In his talk at the IPG conference, Faber says he’ll explore “seven habits of longstanding independent publishers” and secrets of Faber’s enduring success.

“Faber also has a name for poetry, which started with T.S. Eliot and carries on to this day. It helped to create a virtuous circle for Faber because great poets want to be published by someone who publishes great poets. Identifying exactly what makes your company special and making sure that you protect it is a very important element.

“Another is entrepreneurship. How do you remain entrepreneurial when you have a business that has lasted for ninety years and you don’t want it to be flushed down the toilet?

“Well, Faber has had its moments of entrepreneurship, such as starting a paperback list in the 1960s when most hardback publishers weren’t. The interesting thing is that these decisions were taken by the people who were running Faber then who were not members of the Faber family. I think that’s no coincidence. You can be more detached about these decisions and perhaps accept the risks more easily if you are not an owner of the business involved.

“However, by the 1970s, the paperback list, music publishing—now very successful—and the decision to build our own building were eating through the cash and Faber narrowly avoided being taken over by the banks. The lesson from this was that the family couldn’t just wash its hands.”

Entrepreneurship and legacy, it turns out, can be uneasy siblings.

“Unfortunately there isn’t an easy answer to the balance between the two,” Toby Faber says.

“The issue we are trying to grapple with now is what happens to the company when the children of the grandchildren have their own children. We have to start to get into the habit of thinking intergenerationally.”

The UK’s IPG is in its 54th year, with more than 600 members, and is sending Nosy Crow’s Tom Bonnick to the Digital Book World conference in New York City. Read Bonnick’s first article for us here.