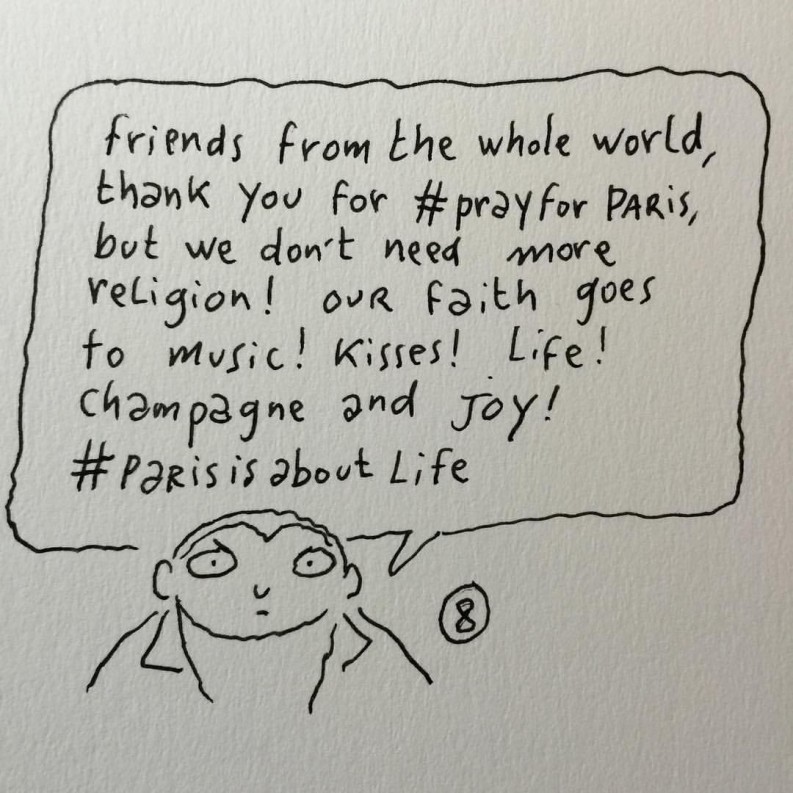 The French publishing community has expressed defiance in the face of Friday’s murders, pointing out that publishing is itself an embodiment of the values of the Republic.

PARIS: As France enters its fifth day of mourning after the horrific killings that took place last Friday evening, various publishing and writers’ federations and unions have publicly reacted to the events. The CNL (National Book Center) was the first to post on its site:

“We are in mourning. Friday, in Paris, cowards assassinated women and men. We cry for the victims and we stand with their loved ones. As we write, we have no news from people we did not know, people we knew, and friends.

“Authors, publishers, booksellers, librarians, we represent, with others, with everyone, the absolute right to express our opinions. We will not give in; we will not back down.

“We will continue to go out and have a drink with friends, dine in a restaurant, listen to music, laugh, write and defend from our position the values of the Republic; secularism, freedom, equality and fraternity.

“We will continue to question and to love, to counter those who impose their answers and their hatred.

“Atheists or believers, Muslims, Jews, Christians or secular, we are the Republic; we are France. We will not be muzzled. We will not give in to fear. Tomorrow, wounded, we will still be here.

“We embody the book and we are standing tall.”

A number of cartoonists and writers expressed themselves on their blogs or Instagram pages. On Saturday, Johann Sfar, author of the Rabbi’s Cat series and ex-Charlie Hebdo cartoonist echoed the CNL’s statement with a drawing that quickly made the rounds on social media under the hashtag #ParisisaboutLife.

On Sunday the news emerged that two young editors, Lola Salines, who worked at the children’s publisher, Gründ (Edi 8), and Ariane Theiller, from Rustica Hebdo (Média Participations) were both tragically killed at the concert that took place at the Bataclan club.

Paris and regional public libraries reopened on Tuesday and the Salon du livre de Jeunesse (children’s book fair) announced that it would maintain the event that opens December 2nd. An excerpt from the Fair’s website reads:

“Culture and children’s literature are precious assets that help our children grow and learn about the world. Children’s literature tells stories that allow children and young adults to understand themselves and each other, to confront fears that distress them, to provide answers to the multiple questions that they are asking themselves.

“Children’s literature also makes them dream, discover words, language, it stimulates their imagination, gives them access, as freely as possible, to the world, to come into the world and to become engaged.

“It is because this right to freedom and access to culture is non-negotiable, because our children have a right to imagine and to dream that we have made the choice to maintain the Children’s book and press fair that will take place in Montreuil from December 2-7.”