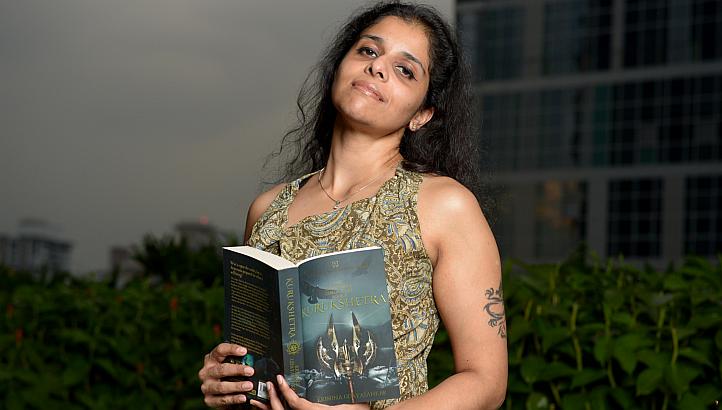 Krishna Udayasankar was born in India, but now lives and teaches in Singapore. She believes there is not sufficient editorial firepower in the country to bring it to the international stage. (Photo Credit: Straits Times)

Akshita Nanda wonders if it will “take an international award” for Singaporean writers and publishers to be taken seriously…or is Singapore its own worst enemy?

At The Strait Times, Akshita Nanda wonders if it “takes an international award to help a country write a new chapter in the literary arts.”

From Malaysia, for example, Rani Manicka’s The Rice Mother won the Commonwealth Writer’s Prize in 2003, Tash Aw won the Costa First Novel Award in 2005 for The Harmony Silk Factory, and Tan Twan Eng’s The Garden of Evening Mists was shortlisted for the 2012 Man Booker Prize and the next year won the Man Asian Literary Prize.

This, Nanda writes, “has led to international publishers becoming more receptive to acquiring manuscripts from or about Malaysia, which in turn, leaves more writing from the country eligible for major overseas awards.”

To take advantage of this interest in books from the region, Singapore publisher Edmund Wee has announced the launch of a new annual prize to encourage fiction writers — with the best being selected for international competition.

But, Nana notes, this begs the question of “why no Singaporean writer of fiction has ever achieved international acclaim for literary quality,” especially given the wide success Singaporean poets have achieved.

She cites two international publishers and a literary agent who has represented Asian writing for more than 10 years – all three refused to be named – who say that “while commercial fiction from Singapore is marketable, literary fiction is only just coming of age in terms of quality.”

So what’s the hold up? First is a “lack of qualified literary editors who can be counted on to help writers shape work of quality.”

“We don’t have editors who can stand up to writers and kick a**,” novelist Krishna Udayasankar, 37, the creator of the best-selling Aryavarta Chronicles fantasy series (Hachette India) told the paper.

Another weakness is that, “given the small local market, many books depending on official funding.” Case in point Sonny Liew’s graphic novel The Art of Charlie Chan Hock Chye, which, due to its political themes, saw it’s $8,000 grant from the National Arts Council revoked, despite having received a publishing deal with Pantheon in the United States.

Professor Robin Hemley, director of the writing program at Yale-NUS College, told the paper that, “One can’t, on the one hand, promote Singaporean writing and, on the other hand, impose subtle and not-so-subtle restrictions on writers and think that won’t have an impact. It’s precisely the kinds of books that tend to make bureaucrats nervous that garner international attention.”

And of course beyond that, there’s the all-important question of marketing. Nanda writes:

“What is needed is for publishers and writers of Singapore literary fiction to become more savvy at marketing themselves. Take the case of The River’s Song by Suchen Christine Lim, published by London-based Aurora Metro Books last year. The publisher recently took advantage of the influential Kirkus Reviews’ Kirkus Indie programme to support small presses. Under this service, publishers pay for a review from “experienced professionals who honestly and impartially evaluate the books they receive”.

“The gamble paid off when Lim’s novel earned a starred review last month. This will make it easier for her books to enter overseas bookstores and possibly, eventually, the notice of an awards committee.

“Observers such as Prof Hemley think it is only a matter of time before a work of fiction from Singapore is noticed by the literary powerhouses of New York and London. ‘I do think Singaporean literature has been coming on strong of late and you should give it time, he says.

To read the rest of the article, click here.