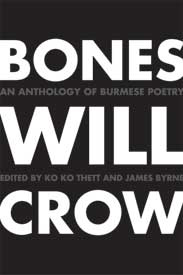 James Byrne examples Burmese literature as it has evolved beyond mass censorship, and saw reasons for cautious optimism. At The Dissident Blog, James Byrne, poet, founder of the poetry journal The Wolf, and co-editor and co-translator for Bones Will Crow: 15 Contemporary Burmese Poets (the first anthology of Burmese poetry to be published in the West), examined Burmese literature post-mass censorship, and saw reasons for cautious optimism.

“The situation is changing for Burmese publishers, too. Until recently it was routine for small press publishers to keep bribe money under the floorboards so that they would be able to publish the work they wanted to, relatively un-censored. Nowadays they can concentrate more on simply publishing the best work out there (and there is more than ever to choose from—poetry remains the most popular form of writing in Burma). Approximately one hundred poetry titles were published last year. The print run of a poetry collection will rarely exceed 1,000 copies, putting it on par with English figures.

“Some of the best writers inside Burma are now getting the attention their work deserves. Leading poet Zeyar Lynn now has an international profile—he toured in North America and England in the last few years and a translated book of his poems appeared in Hong Kong in 2013. He was chosen to represent ‘Myanmar’ at London’s ‘poetry Olympics’ in July 2012.

“One of the most distinguished editors Moe Way (also a fine poet himself) is now expanding his The Eras Press having been invited by Yale University/National University of Singapore to read. Khin Aung Aye has recited his poems in Berlin, South Korea and England. ko ko thett, my co-editor and co-translator of Bones Will Crow: 15 Contemporary Burmese Poets. who writes in English, is soon to publish his debut collection, The Burden of Being Burmese, in North America. Interestingly his current anthological project aims to clarify Burmese poetry post-censorship as a literature ‘in transition.’ Ma Thida, a former Fellow at Brown University in Rhode Island, and Zeyar Lynn are now pivotal figures in PEN Myanmar, which was launched at the PEN International Congress in September 2013. Essentially, many literary figures, once divided along political or aesthetical lines, are now coming together to celebrate a new future for Burmese writing. Indeed, as I write this article, the second Irrawaddy Literature Festival—of which Daw Suu Kyi is the patron—is about to close in Mandalay. Last year I had the honour of opening the inaugural event of the programme with Zeyar Lynn and ko ko thett. That morning hundreds of Burmese were in the ballroom of the Inya Lake Hotel, supporting the first international literature festival ever held in the country.”