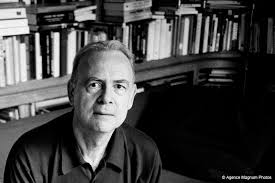 While new Nobel Prize winner Patrick Modiano has been translated into 37 languages, English-language editions of his books are hard to find.

Writing for The Wall Street Journal, Jennifer Maloney and Anna Russell note that while new Nobel Prize winner Patrick Modiano has been translated into 37 languages, in English his books are hard to find. And while several of his earlier novels have been translated into English, most have gone out of print. Boston based publishing house David R. Godine has three of Modiano’s titles in print: two novels, Missing Person and Honeymoon, along with a children’s book, Catherine Certitude. None of these are available in e-versions, and as Maloney and Russell wrote: “publishers won’t be able to put out electronic books overnight. In many cases, the English-language rights to Mr. Modiano’s books have lapsed and now must be renegotiated, according to Anne-Solange Noble, the foreign-rights director for Éditions Gallimard, Mr. Modiano’s French publisher.”

The Journal quoted Aaron Kerner, editorial director at Godine, who said that Patrick Modiano has been “terribly overlooked” in the United States.

“He hasn’t been read nearly enough,” Mr. Kerner said. “He’s an absolutely wonderful writer with sort of spare, beautiful works, very much concerned with the French past, particularly the Occupation and World War II.”

“There just isn’t a huge market in America for world fiction,” he added.

And Antonin Baudry, the cultural counselor for the French Embassy in the U.S. (which opened a French bookstore, Albertine, on New York City’s Fifth Avenue, see our coverage here), told the paper that the store had sold out of its copies of Modiano’s books the day of the prize announcement, and had placed orders for more of them in both French and English.

“There are a lot of very interesting writers who are not translated into English,” Baudry told the Journal. “It’s a risk, but it’s worth it. This is the perfect example of that.”

And writing in The New Yorker, Vahuni Vara expanded on this very topic, asking, “Do You Have To Win a Nobel Prize to be Translated?”

“We probably had a three-hundred-year-supply of Modiano without the Nobel Prize.”

After some number crunching, she wrote about her discussion with Patrick Modiano’s American publisher, David Godine:

“I spoke Thursday afternoon with David Godine, who founded and runs the publishing house; he was at Godine’s warehouse, helping to pack books to be shipped to independent bookstores that had ordered them. ‘It’s sadly ironic that twenty-five years after the fact’—after first publishing Modiano—’here we are with books still sitting on the shelves,’ he told me. Godine paid Modiano’s French publisher advances of under five thousand dollars for each of the three books—the others are Honeymoon and Catherine Certitude—and, before the Nobel announcement, each had sold a couple thousand copies. (Missing Person, for example, sold around two thousand copies.) Godine had sought what publicity he could, but, he told me, it’s getting increasingly difficult to persuade mainstream publications to review books that have been translated.

“Godine had stopped printing the Modiano books but still had a hundred and sixty-four copies of Missing Person sitting around, along with four hundred and sixty-nine copies of Honeymoon and three hundred and seventy of Catherine Certitude. ‘We probably had a three-hundred-year-supply of Modiano without the Nobel Prize,’ he said. ‘There is just not demand in this country.’ Now, the firm is scrambling to print thousands of additional copies, which it expects will take up to a couple of weeks.

“Godine was thrilled about the award, which another one of his authors, Jean-Marie Gustave Le Clézio, also won, in 2008: ‘I can tell you from experience that the best way to get attention for your writers is to have them win the Nobel Prize.’ But judging from his experience with Le Clézio’s books, the inevitable rush of sales—Godine expects to sell six or seven thousand of each—will eventually slow. ‘My takeaway thought to this is that it’s really sad that the only way that these people get any attention is when they win the Nobel Prize—and then, five years from now, no one’s going to remember it, no one’s going to remember that Modiano won it,” he said.'”