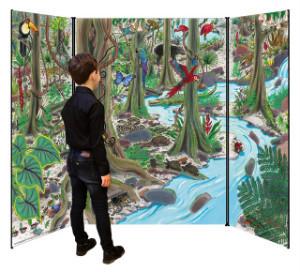 How can the digital age use the tried-and-true concept of a picture book to create something new and wonderful for children? A children’s picture book has a lot going for it: art, wonderful language, and the tradition of a shared experience usually with an adult reader. How can the digital age use the tried-and-true concept of a picture book to create something new and wonderful for children? How about art that is as large as a child? How about details that can be examined up close while interacting with a (FREE) app on an iPad?

This is the concept behind the KIWI (Kids Interactive Walk-In) Storybooks: 5 ft. x 7 ft. paneled screens magnificently illustrated by award-winning children’s author/illustrator Roxie Munro for kids from kindergarten through 5th grade. The lightweight, yet sturdy frames of the screens can be easily assembled and dismantled, and there are panels for eleven themes: Farm and Maze, Fire Station, Space Station and Castle, to name a few. The Velcro panels are easy to change and insert. The free apps for each KIWI StoryBook, which can be downloaded onto iPads, can initiate a scavenger hunt — searching for plants and animals in the desert or rainforest — or help a child discover sounds familiar to the Old West, or make a digital jigsaw puzzle of a photo of the art, or let a child record and edit an original movie. And that’s just the hi-tech part.

If you want to keep the experience in the analog/real world, how about using the panoramic screen as the backdrop for a play? Author and playwright Douglas Love has created scripts for each backdrop so kids can produce a four-person skit or a two-act play for seventeen characters or just improvise a scenario based on some suggestions. There is nothing quite like the collaborative work of theater to motivate and inspire children to learn and share what they’ve learned with others.

The driving force behind the KIWI StoryBooks is Connie Melashenko, a slim, intense woman, who credits her then four-year-old daughter for planting the germ of this idea when she kept asking her mother to help create various venues for role-playing scenarios. Despite her efforts rearranging household furniture to suggest, say, a “pet store” for stuffed animals, her daughter was ultimately disappointed because the settings still looked like home. Connie wondered how she could provide a rich, imagination-provoking play space that would entice children to create and explore themselves. She felt that it had to begin with art. Since Connie was not an artist, she began by looking at children’s books until she found Roxie Munro twenty years ago. The two women shared the same vision and have been working together ever since to bring it to fruition. It was not quick and it was not easy.

The spectacular results were revealed at a launch in New York City, which I attended. This versatile hybrid of art, sound, technology, and language is a portal to children’s own imaginative play and learning. For the creative team, KIWI StoryBooks have been an act of love and tenacity that has the produced the capacity to bring magic back to childhood.

Vicki Cobb is President and founder of iNK Think Tank, LLC  and a children’s nonfiction author.