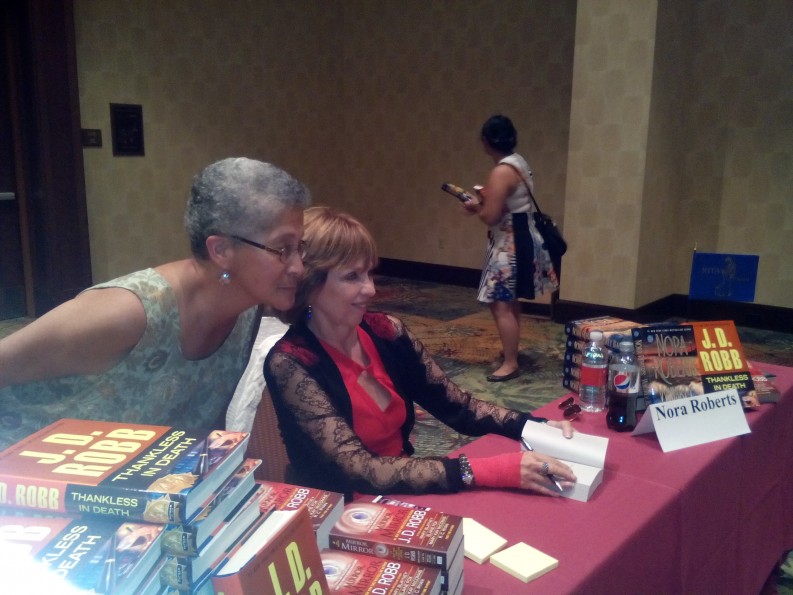 Books for Sale at the Romance Writers of America’s annual conference.

Over 2,200 romance writers, readers, and publishing professionals converged on San Antonio, Texas last week for the Romance Writers of America (RWA) Annual Conference, an immersive, intense five-day course in romance publishing, presented by authors whose names you probably don’t know even though they’ve sold millions of books collectively. Many millions of books, about $1.43 billion worth in 2012.

Founded in 1980 and currently including over 10,000 members, the RWA’s mission statement is very clear about their purpose: “to advance the professional interests of career-focused romance writers through networking and advocacy. RWA works to support the efforts of its members to earn a living, to make a full-time career out of writing romance—or a part-time one that generously supplements his/her main income.”

Over 160 workshops offered during RWA 2014 are designed for authors at all stages of their careers and publishing paths, modeled on 11 different publishing tracks such as craft, marketing, and self-publishing. There are also a number of awards presented including The RITA for published romance fiction novels and The Golden Heart for unpublished romance fiction manuscripts. The conference sold out months in advance.

In addition to educating writers, RWA celebrates librarians, booksellers, and anyone else who promotes romance books. The Librarian and Reader Appreciation Luncheon hosted over 200 people last Wednesday afternoon and featured a keynote by author Barbara Samuel who has published about 50 novels and novellas under several pen names in her 26 year career. Her writing philosophy is “be a writer, see the world, be happy,” cultivated during a life that made all of these efforts challenging because of personal and financial hardships. Her talk was inspiring and emotional to this crowd and by the end many were in tears. Bestseller Nora Roberts posing with one of her fans.

There are a lot of stereotypes about romance readers and writers, some of them based on reality, like the subject matter of many of these books. Titles of those nominated for one of the 16 awards given this year commonly included the words duke, duchess, love, whiskey, sweet, rake, laird, countess, bride, rogue, heart, promise, highlander, royal, rebel, wicked, and scoundrel. If book covers had a death match the bouts would include a bride in slightly torn and sullied wedding gown versus a saloon girl in lace-up boots and bustier, and a plaid-clad highlander versus a ten-gallon-hat-wearing cowboy. All have washboard stomachs, very defined collar bones, and no body hair.

Another stereotype that rings true is the authors at this year’s conference are overwhelmingly female, and many of them are dressed up with kicky hats, spiky heels, flowing dresses, and glittery accessories. Don’t let this exterior mislead you: these women are savvy publishing professionals, here to learn more about the business and make connections with professionals to further their writing careers, no matter what stage they may be in now. Just because they have fun and look good doing it doesn’t diminish the established and growing success of the romance writing industry.

Because the RWA conference changes locations every year there are a significant number of first-timers who attend. The RWA offers an orientation, listed in the program from 2:00-4:00 PM. I thought this meant to stop by during that time frame and pickup an information packet and I thought wrong. It was instead nearly two hours of solid information presented by several published authors who know their way around the RWA world. About 300 people attended, filling the room and spilling out into the hall. Excitement flooded audience when we learned that Rita Clay Estrada, an RWA co- founder and the person the RITA award is named for, was in the audience. Chicks with Dicks? Yes, But Not What You Think

Maggie Worth provided a five page hand-out for her very funny and engaging talk on Romance Writing Lingo (she’s also the author of Writing & Publishing Terminology for Romance Writers). Some of the more popular definitions were GMC (goal, motivation, conflict) and CWD (Chicks with dicks. You don’t want your male characters to use words like ‘diaphanous’ or ‘periwinkle,’ that makes them CWD).

Author and former editor Louisa Edwards talked about Who’s Who at the conference, including deciphering the many ribbon colors on badges that denote different types of professionals (published authors, agents, editors, librarians, booksellers, etc.) and provided an industry insider cheat sheet. She even gave a few conversation starters to help newbies out when waiting for the elevator or bathroom (Are you having a good conference? Have you been to any good workshops?). As remedial as this might seem, it helps a star struck aspiring author get the conversational ball rolling.

Bestselling (a title that many, many authors here use without specifying what the criteria is for accomplishing this) author Roxanne St. Claire discussed what happens after the conference is over – how to organize new information and contacts and prioritize action items.  She also emphasized being positive and enthusiastic in interactions with others and showing interest in their projects.

The positivity message was stressed in every presentation and I started to wonder if it was a “fake it ‘til you make it” effort. After hearing many people discuss their anticipated and realized successes in convincing terms I came away thinking these women are so positive because they’ve created an industry that is extremely popular and lucrative and everyone feels like there is a place for them, if not as the next Nora Roberts then at least as a published writer with an income and a community in which to celebrate their accomplishments.

Why would anyone here be negative? A significant percentage of the 2,200 attendees are published authors who make an income from their writing. There are so many success stories that it’s hard to not be optimistic.  RWA seems to genuinely want them to achieve that success, not just to put up hundreds of dollars to attend the conference – there’s room for everyone at the table as long as you are prepared to do the work.