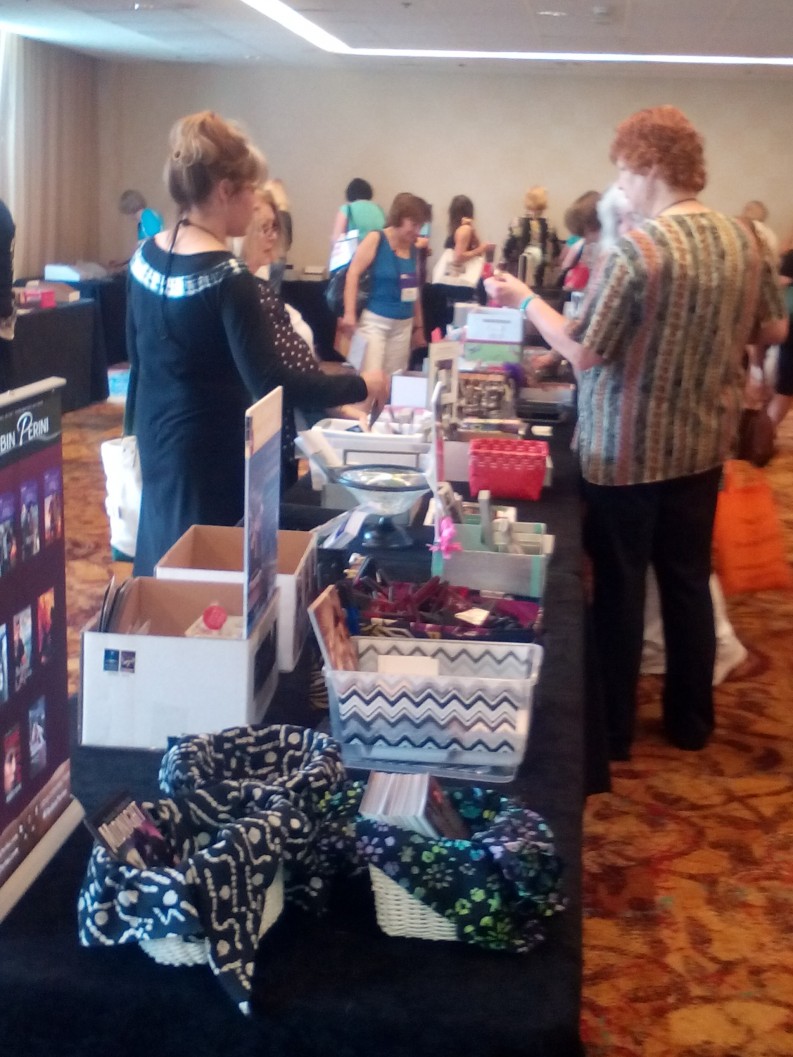 The Romance Writers of America conference offered endless opportunities for fans, aspirants, and bestselling authors to interact and self-promote.

As discussed in today’s feature story, over 2,200 romance writers, readers, and publishing professionals converged on San Antonio, Texas last week for the Romance Writers of America (RWA) Annual Conference, an immersive, intense five-day course in romance publishing. One major attraction of the event is the ability for aspiring romance writers and fans to meet some of the biggest names in the industry. Michele Tencza and Darlene Uribe are the first two fans in line for “The World’s Biggest Book Signing” last Wednesday, with nearly 500 authors scheduled to sign. They have both taken a half-day off from work to be here four hours before the doors open. They didn’t know each other before today but they are now line friends and the envy of the 1500+ people who will eventually line up behind them.

Michele was most excited about mega superstar Nora Roberts, who she first met at a signing in 1996 and has since collected all of her books. One perk of getting in line so early was that Roberts walked by earlier and stopped to take pictures with them, so the day is already an overwhelming success.

This was Darlene’s first-ever book signing and she was here to meet Sylvia Day, another mega bestselling author. She brought her son with her to wait in line, saying “I waited for seven hours to get him a PS4, he can wait a few hours with me for a book signing.”

For two people who didn’t meet until that afternoon, they had a lot in common. Both Michele and Darlene have e-readers but prefer to read physical books.  Michele says “I only read e-books that aren’t available as printed books.” They routinely read a book a day. While both enjoy romance they also read other genre fiction as evidenced by the book Michele brought with her to read, the latest from David Baldacci. Darlene has six children who are all readers and they make regular trips to area bookstores and resale shops to support their book habit.

Many of the authors promoted their appearances at the conference via social media. Michele and Darlene both found out about their authors well before RWA announced the official line-up. Romance readers and writers support a thriving social media scene and #RWA14 was a top trending hashtag on Twitter by Wednesday afternoon.

Authors and publishers donate books for this event and fans purchased them at the retail price; all the proceeds (nearly $53,000 this year) go to one of four charities named by RWA. The signing is underwritten by The Nora Roberts Foundation. Books were promoted relentlessly, including on the elevators, as seen here.

Everyone gets into the signing room so the only perk to getting in line early is to meet your favorite author while she is still fresh and hand cramp-free. It took about 45 minutes for the entire line to make it through the ballroom door and once inside it was sparkly, multi-colored enjoyable madness with 500 authors seated at long tables and fans milling around looking for their current favorites and new authors to follow. Swag is flying as writers offer cake pops, candy bars, and bookmarks to entice readers to their tables.

Speaking of swag, there was lots of it at RWA 2014, including two rooms full of free promotional items that authors and publishers provide for fans. It ran an eclectic gamut from buttons with racy phrases (Hard is Good) and bookmarks to fans, bottle openers, and the most adorable tiny book replicas. There was also chocolate everywhere.

Free books were all around, including nine complimentary titles in the tote bag given to all attendees. For a voracious romance fan this was maybe a week’s worth of reading. There are so many books being given away that swap tables are set up for people to leave the ones they don’t want in exchange for those they do.

The romance publishing industry’s support of the event was also apparent in the high-end promotional materials including ‘wraps’ around all eight elevators in the hotel advertising books and authors and a 70 page full-color program. Every major romance house was represented by editors and other staff who were participating in panels or sponsoring book signings throughout the week.

This was just the first day: writers still had four days of workshops, luncheons, dinners, and pajama parties on the agenda. Writing isn’t all hunched shoulders over a computer screen; sometimes it’s also drinking a margarita out of a glass that looks like sombrero while trying to brainstorm with your writer friends a new series in the vein of Fifty Shades of Grey.