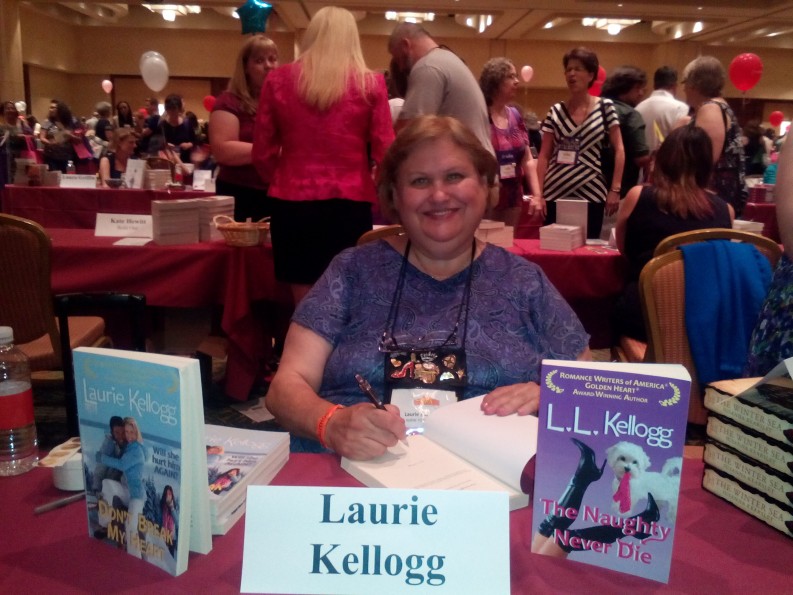 Author Laurie Kellogg was all smiles while meeting her fans.

Laurie Kellogg has self-published nine romance novels since February 2012 and says she’s making more money and having more fun than ever before in her life.

Laurie Kellogg has published nine books since February 2012. The tenth book is scheduled for publication “sometime this year, if I can find the time to write.” The book has a title, cover, and business card. Once Kellogg finishes the manuscript and an editor has reviewed it, she will start the production process to get the book formatted and onto the digital marketplaces; Amazon, B&N, iTunes, Kobo, and Smashwords. Kellogg doesn’t just write her books, she designs them, works on the cover art, produces the book files, and manages all of the marketing and publicity.

Kellogg, who I met at last weeks Romance Writers of America Conference, is a quintessential (and self-proclaimed) Romance Writers of America (RWA) success story. She started writing seriously in 1999, joining RWA the same year. She wrote several novels and submitted them to publishing houses, which was also the start of her collection of rejection notices. At the same time she began entering these manuscripts in the Golden Heart contest, RWA’s award for manuscripts by unpublished authors, eventually becoming a finalist seven times and winning twice. In addition to the awards, Kellogg learned about writing and the industry, and made life-long connections to other RWA members. She believes “there is no other industry where people help their competitors like this. They taught me to write.”

In 2011 she received an offer to publish a series she’d written from a New York publisher but turned them down, deciding to self-publish instead because “They had their chance for all those years!” The first two books she published, The Memory of You and A Little Bit of Déjà Vu, were her Golden Heart winners.

Kellogg said about the financial aspect of self-publishing “I’m making more money now than I ever made from any job I’ve had.” Her e-books are usually priced at $3.99 and her trade paperbacks (print-on-demand) are $7.99. She regularly tracks sales across all platforms and will temporarily reduce book prices to pump up slow sales.