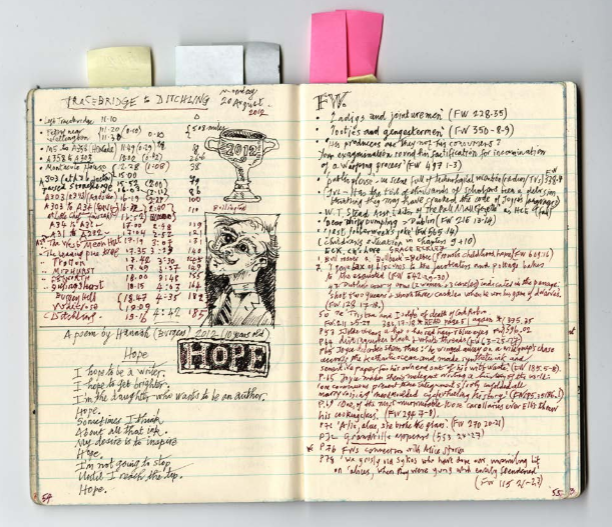 James Joyce’s novel is an act of pure linguistic pyrotechnics, so when faced with the task of illustrating it John Vernon Lord was understandably “bewildered.”

I can’t understand some of my critics, like Pound or Miss Weaver, for instance. They say it’s obscure. They compare it, of course, with Ulysses. But the action of Ulysses was chiefly during the daytime, and the action of my new work takes place chiefly at night. It’s natural things should not be so clear at night, isn’t it now. That’s James Joyce speaking to Richard Ellmann about his novel Finnegans Wake. The book is sui generis, a circle in a spiral, a linguistic Escher drawing, and an act of pure linguistic pyrotechnics, one that includes monologs, dreams, philosophy. So when John Vernon Lord was asked to illustrated the book for the Folio Society it is no surprise that he found the experience “bewildering.”

As he writes in the introduction to the Folio edition, reading the book made him feel like Alice must have felt Alice in Through the Looking Glass when she first read ‘Jabberwoky”: “It seems very pretty…but it’s rather hard to understand. Somehow it fills my head with ideas — only I don’t know exactly what they are!”

The task took him two years and produce 11 illustrations. As he notes, when wrestling with the text, “There’s always a worry that an illustration may introduce a banality into the text, or even strangle it,” and perhaps even worse, “that it can distort a reader’s expectations.”

Here’s Lord’s take on working on something that one would assume is fairly straightforward — the slipcase: The slipcase design is a lightning flash traveling diagonally downwards on a black background: ‘Where lightning leaps from the numbulous’. This relates to the 100-character thunderclaps that Joyce includes at various points in the text. The blackness reminds us that this is a night-time novel; a dream. The lightning configuration also resembles a river, which corresponds to Anna Livia Plurabells, the personification of the river Liffey which pours out at Dublin Bay. As ‘lightning’, the image appears to go diagonally downwards towards the earth, representing the FAll. Alternatively, seen as a ‘river’, the tributaries go upwards and join together as a kind of resurrection.

Sure, there have been other efforts to illustrate Joyce’s classic: in 1929 Joyce asked Stella Steyn to illustration part of the first chapter ‘Anna Livia Plurabelle,” for transition magazine. (Joyce is said to have been “satisfied” with her illustrations) and then there was in infamous statue of Anna Livia Plurabelle that sat on Dublin’s O’Connell Street for years. The latter was nicknamed “The Whore in the Sewer,” (which makes more lyrical sense when spoken in a broad North Dublin accent), and should give you a sense of how the Dubs felt about it. It has since been removed. Suffice it to say that Lord has done an exemplary job. But he also admits, “This is a book that is wide open to interpretation (‘there being two sights for ever a picture’) and if I were to illustrate it again the images might well be very different, such is the breadth of opportunity it gives.”

It is true. The best description I’ve ever heard given of the experience of actually reading Finnegans Wake is from the Irish actor Patrick Healy’s who recorded over a four-day period in 1992 at Dublin’s Bow Lane Recording Studo. (You can listen to it all for free here…) He told me one day over a coffee in 1995 at Bewley’s Café on Grafton St. “Sir, Finnegans Wake is not a book you read, in so far as much as you merely pass your eyes over it…”