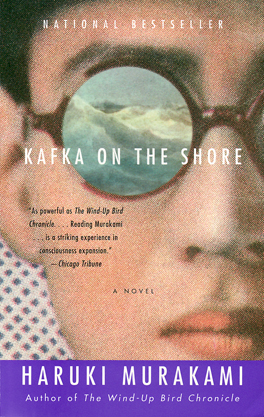 As our journey through the novels of Haruki Murakami, A Wild Murakami Chase, I think I can say with great certainty that you’re going to love this one.

If Hard-boiled Wonderland and the End of the World was an odd (albeit wonderful) introduction to Murakami, and if The Wind-up Bird Chronicle was too long and unwieldy, in my opinion, Kafka on the Shore is Murakami’s most “perfect” and (at least to date) best novel.

I mean, who wouldn’t love a book that along with Murakami’s usual assortment of extraordinary characters and happenings and philosophical musings offers up such delights as fish falling from the sky, conversations between man and cat, a truly supernatural Colonel Sanders, ghostly lovers, a deep-thinking prostitute, World War II soldiers untouched by time, and much more.

It is, I think, truly magical, albeit in ways that are difficult to explain. As Laura Miller wrote,

“It is easier to be bewitched by Haruki Murakami’s fiction than to figure out how he accomplishes the bewitchment. His novels – in America, the best known is probably ‘The Wind-Up Bird Chronicle’ – lack the usual devices of suspense. His narrators tend to be a bit passive, and the stakes in many of his shaggy-dog plots remain obscure. Yet the undercurrent is nearly irresistible, and readers emerge several hundred pages later as if from a trance, convinced they’ve made contact with something significant, if not entirely sure what that something is.”
We hope you’ll join in our reading.