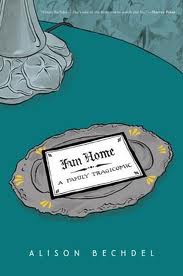 One of the titles to come under fire.

Members of the South Carolina House of Representatives voted last week to cut $69,000 in funding to two public universities that had the temerity to assign gay-themed books as reading for incoming freshmen.

The legislators voted to cut $17,000 in funding from the University of South Carolina Upstate for assigning Out Loud: The Best of Rainbow Radio, a collection of stories broadcast on a South Carolina radio program. The panel cut $52,000 from the budget of the College of Charleston for assigning Alison Bechdel’s Fun Home, a memoir told in graphic novel form, and a finalist for the 2006 National Book Critics Circle Award.

The $69,000 reflects the money spent by the two universities in purchasing the two books. Although the sums in question are a small percentage of the two school’s budgets, Reid Wilson, writing for The Washington Post notes, that “…the cuts are certain to spark debate over whether legislators should be meddling in academic affairs. Democrats who opposed the cuts said lawmakers who wanted to manage a university’s reading list should run for positions on the state Board of Trustees, which oversees the state’s public universities.”

At the Los Angeles Times, Carolyn Kellogg quoted an email that College of Charleston professor Christopher Korey, who leads the school’s First-Year Experience, which oversees the summer reading program that included Bechdel’s book, wrote to the Post and Courier of Charleston. “The [school] committee recognized the book might be controversial for a few readers, but the book asks important questions about family, identity, and the transition to adulthood. These are important questions for all college students.”

He added that, “I’m concerned that some members of the [L]egislature believe their duties include deciding what books should and should not be taught in a college classroom…I believe that 18-year-olds benefit directly from reading and discussing different topics in their courses.”

For his part though, Smith told the paper that Bechdel’s book “goes beyond the pale of academic debate,” for the simple reason that “[i]t graphically shows lesbian acts,” adding that the college was “promoting the gay and lesbian lifestyle.”\

Bechdel’s publisher, Houghton Mifflin Harcourt, issued a statement on the matter to Publishers Weekly from the author:

“I’m very grateful to the people who taught my book at the College of Charleston. It was brave of them to do that given the conservative pressures they’re apparently under. I made a visit to the school last fall for which they also took some flak, but to their great credit they didn’t back down. It’s sad and absurd that the College of Charleston is facing a funding cut for teaching my book — a book which is after all about the tool that this sort of small-mindedness takes on people’s lives.”