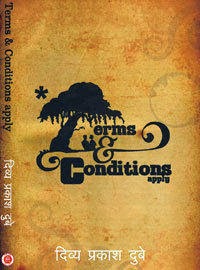 Writing for The Hindustan Times, Manoj Sharma reports that there is a new breed of writers in Hindi, many of them graduates of IIT-IIM, who are “seeking to become the agents of a new revolution in Hindi literature.”

The protagonists of this new breed’s books represent the “young, insurgent India, and its problems as well as their dreams. Take for example Divya Prakash Dubey’s latest book, Terms & Conditions Apply. The choice of the English title was deliberate: “The idea was to make the book look cool,” said Dubey.

Sharma describes the book as “a collection of short stories written in simple conversational Hindi, …set in towns such as Lucknow, Mubai, Indore, and revolve around themes such as college, office, love and relationships, much like the new-age writers in English.”

“The reason why Hindi does not have new popular bestsellers like those in English, is because most of those writing in Hindi are stuck in a time warp, telling stories that aspirational youth of today cannot relate to. My stories in Hindi tackle subjects that the youth can immediately identify with,” said Dubey, a 32-year-old engineer with an MBA degree, who is currently working as a marketing manager in Mumbai with a leading mobile company. Part of the same “school” of authors is Nikhil Sachan – an IIT-IIM alumnus, whose recently published Namak Swadanusar” looks at the dreams and frustrations of young people in contemporary India, as well as Prachand Praveer, an IIT, graduate whose novel Alpahari Grihtyagi: ITT Se Pehle examines the lives of students preparing for competitive exams.

Sharma notes that most of these “new-age writers in Hindi” were raised in small towns, known as tier-II cities, in UP, Bihar, Rajasthan and Madhya Pradesh.

“Sachan,” she writes, “hails from Kanpur, where he went to a Hindi medium school. But Sachan enjoys the work of both Hindi and English writers such as Joseph Keller, Orhan Pamuk, Milan Kundera, Gabriel Garcia Marquez, Shri Lal Shukla and Udah Prasksh…”

“I could have easily written my book in English,” said Sachan, “but I thought my stories were better told in Hindi. There is a wrong notion in [the] Hindi literary world that only those who are MA and PhD in Hindi can write books in the language. Writers like me are trying to change that perception.”

Dubey noted that “There is a lack of popular bestselling new authors in Hindi because of a mismatch between prevalent themes in contemporary Hindi fiction and concerns of the youth. It would be difficult for a girl born and brought up in Delhi to identify with the issues and conflicts of an oppressed woman in a remote village. That is what we are trying to change.”

Unfortunately though, the efforts of the “new breed” have yet to translate into sales. Even priced at the affordable cost of 100-R150, most titles sell between 1000 and 1500 copies.

“I do not think people will not read a good story because it is in Hindi. Hindi books do not sell because they are not available in book shops, thanks to biased distributors. It is merely a question of making them available to the readers,” claims Sachan.

Sharma also takes note of the fact the writers such as Dubey are attempting to “clear the borders” between Hindi and English as “Hinglish.” For example, in Dubey’s Terms & Conditions Apply, “apart from several terms described in English – there are emails that are reproduced without being translated into Hindi.”

The new writers are also adept at using social media to reach out to potential readers. Dubey, for instance, has two YouTube videos promoting his book.

“These writers are not only choosing their topics widely but also know how to promote their books. The success of Hindi translations of the books of writers such as Chetan Bhagat and Ravinder Singh are a testimony to the fact that if Hindi publishers would have promoted these writers they would also have scripted similar success stories,” said Prabhat Ranjan, a Hindi writer who has also translated titles of many well-known English writers such as Vikram Chandra, Mohsin Hamib and Khushwant Singh.

One such publisher who is embracing the “new breed” is Shailesh Bharatwasi, an engineer, who launched Hind Yugm, a Hindi publishing company, in 2010. He told Sharma that what he’s trying to do is what long-established publishing companies should have been doing long ago: “Instead of finding new, young writers in Hindi who wish to experiment with themes, plots and language, they are only re-printing classics. They are not willing to take risks.”

To date, Hindi Yugm has published 100 books, many written by engineers and management professionals. “We are approached by at least 20 ITT-IIM graduates every month who wish to write in Hindi,” said Bharatwasi, who added that he finds new writer by following blogs in Hindi.

“I am very particular that all the books we publish have smart, youthful look, and interesting titles,” said Bharatwasi. “Our upcoming Hindi novel is Kulfi and Cappuccino – a love story set in Jaipur.”