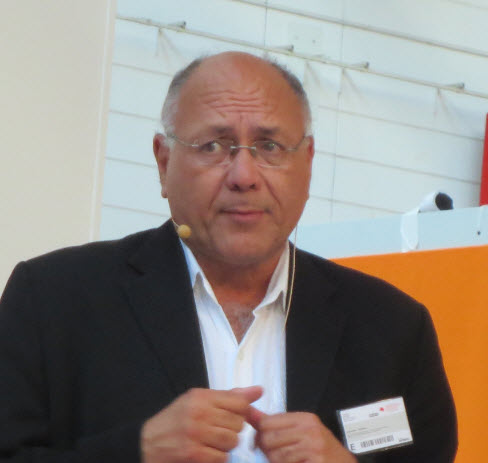 As deep into the digital disruption of publishing as it may seem we are, “Many of the contracts that actually have codified the assets of a publishing house are locked away in cabinets. They haven’t been digitized and they haven’t been really made available for visibility on behalf of various stakeholders within the publishing organization.” Robert Kasher of Firstsource/digi-EXPress is a rights consultant whose presentation at Frankfurt Book Fair last week focused on the increasingly complex issues of publishing contracts executed prior to the digital era and the process of automating new databases of such rights today.

“More and more contracts are having to be more specifically defined. And in the process of defining these things, it really becomes important to have a database [identifying] what exactly the intellectual property assets are. To get there, you have to have a strategy answering, ‘What do I really want to do with this information, who do I want to make it available to, how do I want to make it available, and how does it integrate with how my publishing company operates?'”

Over time, Kasher said, a wide diversity of approaches to the clearance of rights and how they’re handled has developed in the industry.

“Some publishers have authors do the rights,” he said. “Other publishing companies have their editorial staffs clear rights. And still other publishers may have their rights and permission people—acting on behalf of authors and editorial personnel, handle those rights issues.

“But in almost every single case, unless you automate, optimize and integrate with the other things going on within your company, what you’re doing is slowing down the process of making rights available for sale; you’re slowing down the editorial process of clearing rights that may be needed in order to produce a book, and you’re not increasing the actual feedback between the content creator and the content user.”

“What we recommend and, of course, what we have developed over the years is a cloud-based solution. It lets you essentially put your rights database into the cloud, make it available and visible to all the different stakeholders within the company, integrate that with other digital marketplaces that already exist, such as Getty Images, the Motion Picture Association of America. And then be able to acquire and sell rights online either through these various marketplaces or by something as simple as being able to email your contact list off of a global database managed by your company.

“What this does is manage and track your assets and, in the end, monetize and sell your rights.”

As difficult as it may seem to get a company’s database digitized and onto the cloud for full accessibility, Kasher cautioned, not moving in this direction can be costly.

“There’s an enormous amount of revenue staying locked up in your contracts right now,” Kasher said, if they haven’t been digitized and made accessible to the right people.

“It’s very difficult to sell something that you don’t even know you own, let alone that somebody else doesn’t know you own.”