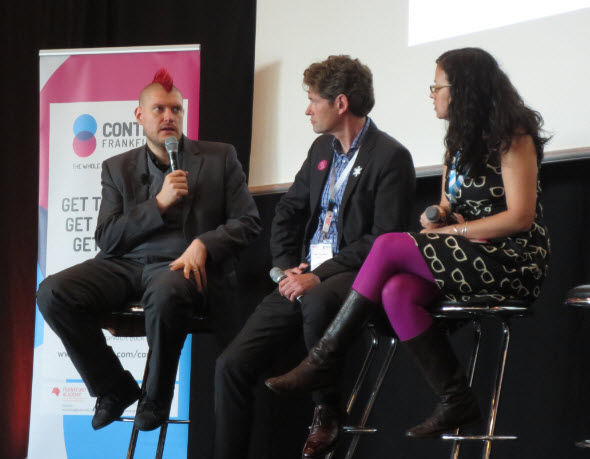 From left, Sascha Lobo, Thorsten Casimir, and Rachel Fershleiser talk about the future of bookselling at Tuesday’s CONTEC 2013 in Frankfurt.

The conference name CONTEC 2013 is created from “the marriage of content and technology,” according to the event’s programming director Kat Meyer.
And in Tuesday’s first iteration of the daylong event at Frankfurt, it was clear that the many uncertainties arising from the collision—or collusion—of these two forces promise the Frankfurt Academy’s new summit an energetic annual life to come.

An opening keynote from publisher Wiley President and CEO Stephen Smith revealed that more than 50% of his education, research, and journal-publishing company’s total global revenue now comes from digital products and services.
“We focus on our content strengths,” Smith said. He estimates that Wiley is “about halfway through our transformation” toward eventually becoming an entirely digital entity. ”We’re like the sailor with one foot on the jetty and one foot on the boat.” In many cases in the educational arena, he said, “what we become is about jobs” at Wiley. “Helping students bridge into the workplace.”

Journalist, writer, and blogger Sascha Lobo followed Smith with a second keynote address for the morning, an explication of his own new venture, SoBooks. Launching at 3:30 p.m. Frankfurt time on Wednesday (9 October) at the Book Fair, SoBooks is an effort to bring social reading into closer alignment with “networked book” concepts anticipated for years by some observers.

“Books have always been about sharing all the time,” Lobo told the audience. “Like the internet.”

His concept involves understanding of the book’s basic nature: “Books are the best way to pay smart people for sharing their thoughts,” he said. And social interaction, for Lobo, is the key to book discovery, reading, and sales in the future.

The Future of Bookselling “The hallways,” as they’re called — highly valued networking time between sessions at CONTEC 2013 in Frankfurt.

In joining a panel discussion that followed, however, Lobo seemed to predict that content might be more important as the future currency of bookselling than even recommendation.

Rachel Fershleiser, who heads publishing outreach at Tumblr, joined Lobo on the panel, “What is the Future of Bookselling?” which was moderated by The Literary Platform’s Sophie Rochester.

Fershleiser’s position on bookselling and the future of the traditional bricks-and-mortar bookshop may have been less divergent than expected from Lobo’s own interests. In a sense, he and she are talking about similar effects, he in the online setting and she in the physical world.

“If we try to compete with Amazon on selection, price, convenience?” Fershleiser asked. “Then yes, we’ll disappear from high streets.” But if stores can focus on their community service roles, they may find a future in cultural contribution to a population’s civic life.

Fershleiser counts good booksellers as being among the professionals she values in book recommendation and discovery.

“I think the idea we don’t have gatekeepers is absurd,” she said. ” We have more diverse gatekeepers” than the old news media model could provide, with today’s input coming from engaged and sometimes astute observers far beyond the traditional news-based critics.

Another member of the panel, however, Dr. Thorsten Casimir of MVB Marketing, stressed, “We need the experts more and more because expertise on the internet is hidden” at times behind what Rochester referred to as the “cloud of comment” in the online world.

And even the discussion of digital challenges to traditional bookselling, Casimir said, is complicated by a diversity of issues: “We have completely different conditions in different countries” for bookselling,” he said.

For their part, Lobo and Fershleiser seemed to agree that the bookish conversation made possible in the online space is the advantage. As Fershleiser put it, there have been times when she didn’t know she needed a given book, “until I saw a discussion about it online.”

In the good-humored tone of the panel, Lobo asked her where she’d found such influential discussions online—no doubt with his own coming SoBooks in mind.
“On Tumblr,” she told him, of course.

On Tuesday just before the opening of the Book Fair, the CONTEC conference was designed as an agenda-setter to the Fair’s week of activities and was organized to emphasize networking among attendees. The program included a startup showcase of publishing-related ventures; “learning lab” sessions on self-publishing’s impact and publishing in the education space; new discussions in metadata; and changes not only in digital ventures but also in print publishing.