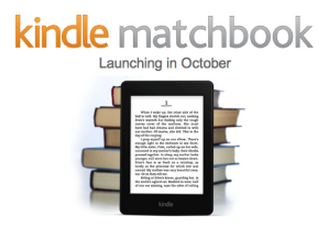 Datapoint: Amazon has announced that it will soon be offering “over 10,000” heavily discounted ebooks to previous buyers of the same edition in print going as far back as 1995. They are calling it “Kindle Matchbook.”

What it means: Amazon is backing into ebook and print bundling.

Is it really 10,000 titles? No. Currently, Amazon appears only to offering the heavily discounted ebooks, which are available for prices ranging from $0-$2.99, with HarperCollins (authors on offer include Michael Crichton, Ray Bradbury, Jodi Picoult, Neil Gaiman, Wally Lamb) and its own publishing wing. Alas, Russ Grandinetti, Amazon’s vp of Kindle Content, told the New York Times that he merely “predicted” that 10,000 titles would be available by the time the program launched in October.

Will they get there? Maybe. It all depends on how Amazon handles publishers.

Why now? Because the temporary end of agency pricing allows Amazon to again offer ebooks a price that is a likely loss leader, but will attract and solidify relationships with customers.

What is the benefit to publishers: That said, if the right deal is negotiated, a publisher might be able to retroactively extract information from Amazon about their customers, however general that may be, giving them additional data to pour into their relatively fresh research departments.

Will it work? Provided Amazon makes it easy to discover that you can repurchase an ebook edition, it should likely generate revenue from customers that would not have been on the table. However, it does set up a model for future ebook bundling — “buy the print book and get the ebook at a discount” — that consumers have been craving.

Further Reading from Publishing Perspectives: Ghost in the Machine: Does Print+Ebook Bundling Have a Future?