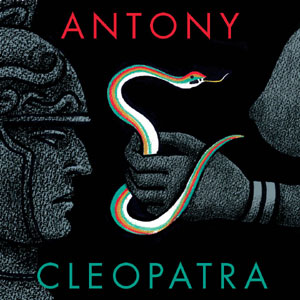 As Publishing Perspectives continues its epic reading of the complete plays (and some of the sonnets) of William Shakespeare, The Play’s The Thing, we’re ready to move on from the shatteringly bleak Ancient Britain of King Lear to the sweeping gorgeous panorama that is Antony and Cleopatra. (Think 1939 The Wizard of Oz, and stepping out of the grim black-and-white world of Kansas into the Technicolor splendor that is Oz.)

There are many ways to describe the play (and an equal number of ways to attempt to describe Cleopatra herself, perhaps Shakespeare’s most “subtle and formidable” representation of a woman), but Harold Goddard, I think, strikes just the right note:

“If one were asked to select the play of Shakespeare’s that best represents all aspects of his genius and preserves the most harmonious balance among them, Antony and Cleopatra would be the inevitable choice. Here history, comedy, and tragedy are chemically combined; here the scope of the drama is world-wide, here sprawling and recalcitrant material is integrated with a conservative art that only many re-readings permit one to appreciate; here all the important characters of a huge cast are distinctly individualized, humor is so inherent that we do not think of it and could not conceivably speak of it as comic relief; here poetry of the highest order remains continually in keeping with the immense variety of scene and subject; here, finally, a conclusion that borrows touches from the death scenes of Romeo and Juliet, Hamlet, Othello, and King Lear blends them into what is in some respects the most complex, sustained and magnificent piece of musical orchestration to be found anywhere in Shakespeare.”

Enter into The Play’s The Thing here