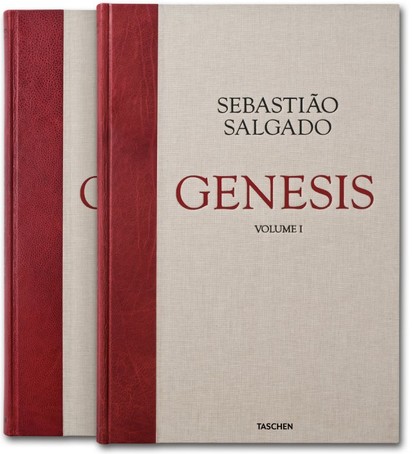 The Wall Street Journal reports that while most major publishers are making the move to digital (with titles priced accordingly), one publisher is moving in the opposite direction: attempting to corner the market in oversize, highly collectible books. And they don’t come more collectible than the “art edition” of Taschen’s latest title, Genesis. Taschen, the Cologne, Germany-based publishing house headed by Benedikt Taschen, joined with Sebastiao Salgado, a Brazilian based photojournalist who set out on a nearly a ten-year expedition to rediscover the mountains, deserts and oceans, the animals and peoples that have so far escaped the imprint of modern society — the land and life of a still pristine planet — to produce Genesis. According to the Journal, “The 704-page two-volume collection of black-and-white photos depicts Mr. Salgado’s trek, which included a 47-day journey tracking 7,000 reindeer across Northern Siberia and a roughly 525-mile hike in the Simien Mountains of Ethiopia.”

How much does it cost? The “art edition,” 500 leather-bound copies, including a signed print (purchasers can select from five different photographs), as well as a custom-made stand from Japanese architect Tadao Ando, weights 130 pounds, stands nearly four feet tall, and retails for $9,000.

A little outside your price range? A collector’s edition, bound in leather but with a cloth cover, still including the stand (but not the print), will have a 2,500 copy print run and will be available for $3,000. Both editions are currently available for pre-order, and are expected to arrive in Taschen’s stores (11 worldwide), in mid-June. A head’s up though: Approximately half of the large format editions have already been purchased, and the price will go up $1,000 for each edition on June 15th.

Still a little too much? There is also a $70 dollar “coffee table” edition, which has been translated into Italian, German, French, Spanish and Portuguese and is already on its third print run with 300,000 copies sold. (That version went on sale in the U.S. on May 1st.)

To help market the books Taschen, for the first time in its history, will be selling t-shirts, tote bags and the like, to accompany the 23-city travelling exhibition of 250 of Mr. Salgado’s “Genesis” photographs.

But for Benedikt Taschen, whose company publishes only 100 titles per year, it’s all about producing quality books that last. “So many books,” he told the WSJ, “are disposable from the start, not designed to become significant objects.” Taschen’s books, it seems, are anything but disposable.

So tell us, would you spend $9,000 of a book? How about if it came with its own bookstand?