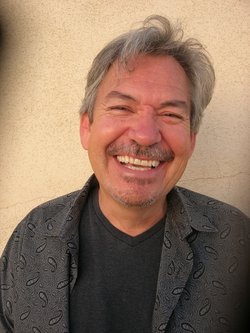 Husband and wife Bobby and Lee Merrill Byrd founded Cinco Puntos Press, named after their adoptive neighborhood of Five Points in El Paso, Texas, in 1985, and have garnered respect and success both as publishers and writers.

“When we started we thought there would be more time for our own writing, but it’s a huge job; you’re there in your heart and mind more than 40 hours a week. But it has taken us to intellectual territories that we wouldn’t have explored without publishing being the driving force,” Bobby Byrd tells Publishing Perspectives.

“Independent publishing is like writing. It’s an act of self-discovery,” Bobby says, a poet who portrays the bicultural society in collections such as The Transmigration of Souls in El Paso and The Cost of Doing Business in Mexico. Author Benjamin Alire Sáenz is a mainstay of the catalog.

“El Paso and the border region are a very fertile place for writers and artists, and we’ve leaned on those roots. As we’ve done so, the map of our being has expanded so that people are now looking to us from New York and California as possible publishers of their work because they feel at home with our multicultural perspective, recognizing the importance of the Latino presence both in literature and in the national psyche,” Bobby explains.

Inhabiting that ‘fertile ground’ is Benjamin Alire Saénz, Chair of the Creative Writing Department at the University of Texas at El Paso, and the recipient of the 2013 PEN/Faulkner Award for fiction for his short story collection Everything Begins & Ends at the Kentucky Club, in which each story features a scene in said bar located across the border in Ciudad Juárez.

Referring to the PEN/Faulkner Award for Alire Saénz, Bobby says: “It’s not only a great award for Benjamin but also for Cinco Puntos because of the notoriety it brings us.”

Amid the burgeoning numbers of Mexicans making the US their home, Mexican has replaced Cuban as the default Spanish spoken in the US, and Cinco Puntos has been able to capitalize on the shift in the gravitation of the Spanish-language publishing industry from the east coast toward the southern border, and on the emergence of what Bobby calls “the Mexican ambiente and culture” as the dominant Latino presence in the US. “We’re very lucky to be where we are because we were on the cusp of all this, and El Paso is a very Mexican city,” he explains.

Cinco Puntos first made waves with the publication of a bilingual edition of The Story of Colors, penned by Mexican insurgent Subcomandante Marcos, leader of the 1994 Zapatista uprising in Chiapas. The text originally appeared as a communiqué that same year, and was later published in book form by Guadalajara-based Colectivo Callejero.

The book’s publication in the US led to the National Endowment for the Arts withdrawing a grant from Cinco Puntos amid fear that royalties would be channeled back to the Zapatistas, a jungle-based guerrilla organization but with grassroots support. The book went on to sell 20,000 copies, quadrupling its initial print run.

Cinco Puntos has since published Marcos’s Questions and Swords: Folk Tales of the Zapatista Revolution.

The catalog also includes history books such as David Dorado Romo’s Ringside Seat to a Revolution: An Underground History of El Paso and Juárez, 1893-1923; as well as Elena Poniatowska’s Las Soldaderas, about the role of women in the revolution.

Unusually accessible, the editors invite submissions from writers by way of phone queries, a far cry from the usual snail mail and no-calls-please rules of engagement.

“When Lee suggested that, I thought she was crazy. But in the long run, it saves her time. She can weed a lot of stuff out. We’ve got a couple of books that way,” Bobby says.

Read It and Weep

The press’s first children’s title was the 1987 bilingual edition of Joe Hayes’ La Llorona, a retelling of a traditional folk tale that is deeply ingrained in Latino culture about a weeping woman in search of her drowned children.

“When we started out we had no idea what the children’s market was. La Llorona is a story that every Mexican and Mexican-American kid knows, but it’s a story that no New York publisher was going to touch. They just weren’t going to understand it. Publishing it was a huge leap of faith, but because we live on the border and we know what people here want, it was a no-brainer.”

The book sold close to 400,000 copies and bore out Bobby and Lee’s belief that, by keeping their ears to the ground, they could follow their instincts and make bilingual editions pay off, with the greater investment required to cover translation being rewarded by introducing writers and their works to a wider market.

“Being independent is interesting because you can develop for mixed markets and sell books in those markets,” Bobby says.

As well as the book’s subject matter tapping into the collective Latino subconscious, the bilingual format represents an important vehicle for reaching readers in both cultures, particularly in a region where, as they grow up in the US, immigrants’ offspring become gradually estranged from their parents’ mother tongue.

“There’s a pedagogical argument, from east-coast intellectual educators, that kids don’t learn from bilingual books. But on the border (here) it makes perfect sense. Where you have a Mexican family in which the child speaks English but the grandmother Spanish, for example, it’s a book the whole family can participate in. The book becomes a learning tool that speaks to the culture they live in. It’s very important for kids that they see themselves in books,” Bobby says.

The award set an important precedent in a state with a significant percentage of children reading English as a second language. In Texas, and across the US southwest, bilingual books represent an important bridge across a language divide that is much wider than the Rio Grande.

“Here’s this great red state, supposedly very conservative, and it selects a book that is not only bilingual but bicultural,” Bobby says.

And across the border not all is lost: Ciudad Juárez launched an annual International Book Fair in 2012, an event that is likely to shine another spotlight on the region’s publishing scene and provide an important showcase for the busy cross-border book traffic.